I had a great visit with my sweet granddaughters. While with them I try to stay off social media so I give them lots of undivided attention. I’m back now and glad that many of you took the time to watch the video of Fred and Marie and shared your comments. Now if anyone knows of a similar video with more passive/aggressive or covert abusive tactics I would love to know about it.

Tonight (Wednesday, July 13th) I will be on my professional Facebook Page doing a live stream at 7:30 PM EST. I will be discussing boundaries – what they are and how to establish them. Please join me.

Our CONQUER conference has over 200 women from all over the US and Canada registered so far. Early Bird pricing is still in effect and I would love for you to come, grow, get strong, and encourage one another. To register, click here. 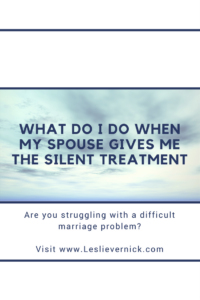 Question: What is the proper response to the silent treatment when it has been 10 days and no matter what, you will be blamed? Do you distance yourself or move toward reconciliation?

Answer:  First, it’s important to distinguish between the silent treatment and a time out. A timeout is a good thing and is taken when a couple is arguing in a non-productive or destructive manner and one or both parties call a timeout in order to calm down, rest, regroup, pray, or do what it takes to come back and talk constructively about the topic or problem. Ideally, a time-out should last no longer than 24 hours and the one who called the time-out initiates the reconnect with the other spouse to say when he or she would be prepared to resume the discussion.

The silent treatment is not helpful and is a passive aggressive form of punishment. One person is angry or unhappy with something you have done or not done and instead of talking it through, there is a withdrawal of communication, attention, and care as a means of punishment. I remember one woman I worked with whose spouse did not speak with her for over a year despite her pleas to discuss things.

The person who chooses the silent treatment as a pattern of behavior operates out of a victim mindset. A victim mindset believes he  is powerless to bring about change and blames circumstances (or other people) for how he feels. He  is hurt or angry about something but refuses, to be honest, and talk about what’s bothering him. He will not do the work of expressing his feelings, stating his needs, negotiating a compromise, understanding another person’s perspective and moving towards a solution and reconciliation of the relationship or even of ending the relationship. Instead, he manipulates, punishes and attempts to control the other person through protracted silence.

Deep down, the silent partner wants two things. He wants to make you pay for upsetting him and he wants you to take full responsibility (blame) for his emotional state and rescue him out of his funk by attempting relationship repairs. Sadly, even when you attempt to do so, the silent spouse often resists your attempts and further rejects you through continued silence (more punishment). Somehow you are supposed to figure out what you did wrong, make amends, and beg this person back into relationship with you, without him having to take any responsibility for communicating or working towards a mutual solution.

But your question was, what should you do when you are on the receiving end of the silent treatment? First, you need to work on not reacting to his passive form of aggression towards you. He tempts you to step into two unhealthy roles if you are not vigilant. You will either start the rescuing process as I've already described, or you will get angry and lean into the persecutor role, which will shame and attack him. And be careful, you may go back and forth between the two. Either way, he gets to stay the innocent, blameless, victim and continue to see you as the bad guy–the one to blame for everything wrong in his life.

Instead of dancing that old dance again, just go about your life while he’s brooding in silence. Get out with your friends and try not to take his rejection personally. Instead, see it as a very immature response to being unhappy with something and being unable to deal with his feelings. What you can do is continue to invite him (not beg) to take responsibility for himself, to discuss what’s wrong.

So you might say something like, “I am happy to discuss what’s wrong when you are ready to talk about this, just let me know.” And then go about your life. Hopefully, this will signal to your husband that his tactic isn’t working to control or punish you. You will no longer rescue, beg or badger. In this moment, you will function as a healthy adult who invites another adult into a discussion about “what’s wrong.”

You can’t force someone to talk about it nor can you fix something if you don’t know what is broken (tweet that).

Understand this new approach doesn’t come without risk. He may sink more into a victim mentality, feel rejected and that you don’t care about him because you aren’t knocking yourself out to “fix and rescue” the relationship. Or, his aggression might switch from passive to more active and he may start to talk but it usually isn’t constructive conversation but blaming, accusing, and attacking words, blaming you for everything that’s wrong with his life and your marriage.

In that moment it’s important for you to stay in CORE strength and really see what’s happening so that you can find some compassion for him. How? Remember, he is unable to express himself in a good way, so his typical way is to shut down and be silent. When that doesn’t work, he explodes and vomits out his ugly feelings. Yes, that is hurtful, but it’s clear that he doesn’t know how to handle his emotions any better than he is doing.

If he explodes, then you can compassionately say, “I see you are very upset and hurt or angry and I’m glad you are ready to tell me what’s bothering you but the way you’re talking right now is destructive and I can’t listen to you when you are attacking me. I’m going to give you some time to calm down and figure out how to tell me what’s wrong in a more constructive way.” Then walk away. Again, you are inviting him to mature, to grow, to learn how to express himself, but in healthier ways in order to actually resolve the issue and not just allow him to attack you.

In the end, sadly, nothing may change with him, but if you don’t get drawn into the destructive pattern, a lot can change with you.

Friends, what do you do when you have been at the receiving end of the silent treatment? Or, have you been one who has been silent, refusing to talk about what’s wrong? If so, what has this blog taught you?