Well, I did it. I ran the “MORE” Half Marathon in NYC last Sunday. It’s been on my bucket list for years and years to run a half marathon even though I have never been a runner. I figured I’d better do it now or I will be too old.

On New Years Eve, 2015, my friend Sue, challenged the women in our small group to join her for this half marathon in April 2016. This was my chance and I committed. It’s scary to commit yourself to a big goal – a goal that is way outside your comfort zone or experience level. And there is a crucial distinction that is important for all of us to recognize. Although I sincerely desired to achieve my goal, it took months of faithful training and practice to actually get my body to be capable of reaching that goal.

In the same way, Jesus tells us, “Your spirit is willing, but your flesh is weak.” (Matthew 26:41). If you or someone you know wants to make a change, even when your heart is sincere, it takes more than words to make that change. It takes a commitment. It takes a plan and it takes support from wise others who have already walked that journey.

In my situation, Sue, an experienced marathon runner regularly e-mailed me over the months of training to check on my progress. On race day, she brought some gel packs that gave me extra energy for when I thought my feet and legs would fall off. She told me it was better to walk up the steep hills instead of running, and throughout the entire race, she ran right by my side encouraging me and praying for our victory.

Perhaps you have a big goal. It might be to get a job, go back to college, separate from your destructive spouse, or work toward reconciliation. Desire is only the first step. What is your plan to turn your desire into a reality? What changes do you need to put in place so you can achieve your goal? For me, it was committing significant time each week to run so that my body would be capable of running that distance. For others it might be going to a financial planner, saving money, contacting a college advisor, taking a class, going to therapy, or joining a support group to get strong enough to take the next steps.

Whatever it is, start small but start now. I did not begin my training program running miles. I walked one mile. Then I ran a little bit in-between walking. Each day I’d add a little more distance and a little more running until I could run one mile without stopping, then two. But I stayed faithful and consistent and in the end, I achieved my goal. So can you.

CONQUER, our support group for women is open for new members.  This happens only twice a year and will close to new members this Saturday, April 23rd, at midnight.  For more information on CONQUER and its benefits, click here.

The question this week dovetails on this topic because a woman wants to believe her husband’s words. However, even if his words are sincere, she can’t trust his actions and to do so could result in great harm to her child. 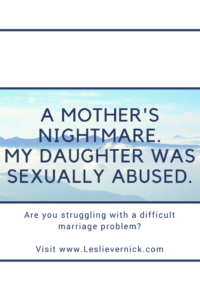 This Week’s Question: I have known my husband my entire life. We first dated when we were 18. We’re now 40, been married for 3 years with 2 kids. Our oldest daughter is mine, although he has raised her for the last 8 years. He is an amazing father and she has had her rough times with him but great times too. He has done a lot for her.

Our son adores him. He is his best buddy. Recently my daughter said he touched her private parts on three separate occasions. She said it started two weeks ago.

I will admit we have had our issues but this is unimaginable. He said he accidentally did it once and she moved his hand. He said he was embarrassed. Anyway, she told a family member, we went to go to counseling, and the police were called. Now, my daughter yells at me that she wants me to hate him. I married this man with the intent to be together forever. I have always loved him even when we were not together when we were young and I still loved him. Everyone tells me I can no longer be with him or love him. They want me to hate him.

Only God, my daughter, and husband know what truly happened. But if God can forgive him and we let God back into our life and remove Satan, wouldn’t God want us to be together? He knows he is a good man? Please help I’m stuck in the middle.

Answer: You are in a mother’s worst nightmare and I feel for your dilemma. Your daughter has accused your husband of inappropriate touching not only once but three times. She was also brave enough to disclose it to you and another family member. She is a strong little girl and needs to be heard and supported. Studies show that the sexual abuse or inappropriate touch of a child is not always the most traumatic thing she experiences but rather the reluctance of her mother or other family members to believe or protect her.

Your job as her mother now is to protect your daughter. She only has one mother and God has put you in that role. You say your spouse is a good man but good people sometimes do bad things. He’s confessed to inappropriately touching her once – by accident, but it’s hard for me to imagine how he could accidently touch an 8-year old girl’s private parts – and keep his hand there long enough that she would physically have to move it away. Also, pedophiles (which are men who are attracted to pre-pubescent children) minimize and lie about what happens, so I would trust your daughter’s word over your husband’s.

This issue is very serious. You do not need to hate your husband but you do need to recognize that he has a serious problem that is not fixed by prayer alone. I don’t want you to close your eyes to what has happened or look at it as an accident. A grown man is not sexually attracted to a pre-pubescent child unless he has serious problems and he must recognize and face what’s going on in his own heart and habits.

You say only God, your husband and daughter know for sure what happened, but I think you know in your heart of hearts that your daughter is telling you the truth. You ask, “But if God can forgive him and we let God back into our life and remove Satan, wouldn’t God want us to be together?”

The answer is no.

We can forgive but there are times that we never must forget. Sometimes consequences for serious sin are permanent.(tweet that)

Even if forgiveness has been granted, your husband should not have contact with your daughter. If he gets help, says he’s changed, she has forgiven him and wants to see him again, he should still not have unsupervised contact with her or other minor children, period. That may seem harsh but listen to Jesus’ words about those who harm children.

He says, “Whoever causes one of these little ones who believe in me to sin, it would be better for him if a millstone were hung around his neck, and he were drowned in the depth of the sea. Woe to the world because of offense! For offenses must come, but woe to that man by whom the offense comes!” (Matthew 18:6-7 NKJV).

Jesus knows that people victimized others. Because Satan is the prince of this world, he is always behind this kind of evil. Jesus sternly warns those who hurt children that they will receive the severest judgment, but what are the offenses that Jesus is talking about here?

The Greek word for “offenses” is skándalon, which means:

“The trigger in the trap on which the bait is placed and that springs the trap when it is touched by the animal, causing the trap to close. Skándalon always denotes the enticement or occasion leading to conduct which brings with it the ruin of the person in question.” (Spiros Zodhiates, Th.D., ed., The Complete Word Study New Testament, p. 955)

Jesus says when someone traps or entices a child and harms her it profoundly affects her life. Jesus knows that those who abuse children can cause havoc with their view of themselves, their view of God, and their future ability to form trusting and loving relationships.

To minimize that damage, it is up to you as her mother to lovingly support her, protect her, and make sure she doesn’t feel responsible for any of your current stress or unhappiness. She didn’t “do this”, your husband did.

That may mean that you have to get your own therapy to work through your grief around all that has happened so that it doesn’t impact your judgment or your care of your children. This will be one of the hardest most challenging things you ever do, but with God’s help, you can do it.

Friends, has this ever happened to you? What would you advise her to do to stay strong for her daughter as well as process her own grief about her marriage?