Thanks for your prayers. My home chaos continues during the renovations but I am more conscious of my “inner game.” What does that mean? Well, I’ve been reading in Philippians how Paul stayed positive and upbeat even while in prison.

His outer circumstances were rough, yet Paul was confident, even joyful that God had a plan. That God was at work and that good things were happening despite Paul’s personal suffering.

How did Paul do this? Here’s how. Paul paid attention to his mindset, his thought life, his inner game. It was something he regularly worked on learning to take every thought captive to the obedience of Christ (2 Corinthians 10:5).

I’m reading the book of Philippians as a challenge. I want to work more intentionally on my own internal mindset. We know we often have very little control over our outer circumstances. Nor can we control other people. But we are mandated to learn how to control our own selves. To think on things that are true, good and right and make it a discipline to practice this way of “seeing” so that it becomes second nature (Philippians 4:8,9).

Our mindset has a lot to do with our mood and even the choices we make. When we stay stuck in a negative, helpless, victim mindset, we will create a much different outcome in the circumstances we find ourselves in than when we learn to think like a daughter of the King, a woman of strength and dignity, and a good steward of our one precious and sacred life.

This leads me to respond to this week’s question with that idea in mind. 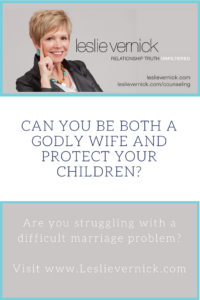 Question: How do I tell if my husband is being emotionally abusive to our children? Things have been said to them, often, that if they don't stop doing whatever they are doing, such as misbehaving, that he will: lose it, make them be his slave for the day, throw their toys away, make them sit in a corner at a wedding, etc.

He has also said their words are like acid and venom and that they need to shut up. Questions have been asked if they enjoy causing trouble?

They have been called brats and feel like they are stupid. They have been sent to their rooms and threatened that they would stay there for long periods of time.

There is yelling. I have confronted him for years for the way he talks to them. The kids are now afraid to be left alone with him when I leave.

Our oldest daughter turned to self-harm, which thankfully is in the healing process of that.

What am I supposed to do as a godly wife to help my husband but yet protect my children?

Answer: First I think you already know that what your husband is doing is considered emotionally abusive. This is not God’s way of parenting or helping your children to feel safe and secure. He’s trying to control their behaviors using fear rather than love.

But here is where I think you’ve gotten confused. You asked, “what am I supposed to do as a godly wife to help my husband but yet protect my children?”

But what if you could be both a godly wife and protect your children? That is God’s will for you. It is what God calls you to do. The problem might stem from how you are defining a godly wife. Perhaps you see it from a very narrow and incorrect mindset.

I wonder if you define a godly wife as a woman who never questions or challenges her husband. One that puts her husband’s feelings first regardless of the damage he causes in the family. One that helps him “Be the head of the home” regardless of whether he does that in a godly way or a cruel and abusive way. One that doesn’t interfere with his poor parenting so that you support him no matter what. So you don’t look like you have a divided parenting approach or marriage.

I’m going to make some assumptions about things you may have already tried. You already said you’ve confronted him for years about the way he talks to the kids. Have you suggested that the two of you attend parenting classes or asked him to seek help to know how to connect better with his kids without using fear or force? You probably have.

My guess is that deep down he wants to be a good dad. No parent sets out to be a jerk to his kids. People usually parent as they were parented, without much reflection. Or they do try to do better than they were parented, but in your husband’s mind, he might think he’s doing better because he’s not beating them like he was beaten.

Has he been open to your feedback, confrontations, or suggestions? With your daughter’s issues, did he reflect at all on what he has done to cause your daughter so much pain? Has he been involved at all in her healing process?

If the answer is no, he hasn’t been open to your concerns then what’s your next step?

So dig deep and ask yourself another tough question. If you are called to love your husband in a way that no one else does (as his wife), what would be your husband’s biggest need right now? If you could look at you husband from God’s vantage point, what would God say he needs the most from you?

Is it for you to be submissive and silently support the way he thinks and acts, especially with the way he mistreats your children? Or is it something much more radical and risky?

Like Queen Esther, God may be asking you to stand up for your children and even for your husband in a redemptive way. Your husband’s greatest need right now is to wake up to his destructive parenting and repent. God wants him to change and become a better man and a godly parent.

How can you participate in that process? You’ve already tried talking to him. That hasn’t worked. You are not God’s Holy Spirit so it’s not your job to keep “telling” him over and over again. So what is your next step?

When someone doesn’t listen to words, usually the next step is experiencing some negative consequences. Your daughter’s consequences didn’t impact him. So what consequences can you implement that might wake him up?

When there is physical abuse, calling the police and being arrested can be a huge wake-up call. Another consequence might be separating and filing a protection from abuse order not only to protect your children but wake him up to the consequences of his own actions. However, with emotional abuse, there isn’t that legal protection and some people might argue that his behaviors aren’t severe enough to warrant breaking up the family unit through a separation.

I also understand that some mothers feel they can protect their children from their father’s poor parenting by being present in the home. Marital separation causes it’s own set of problems, especially if he gets unsupervised visitation rights with the children where you can’t see what’s going on with them.

So here is what you can do to both be a godly wife and protect your children if you’re not ready to separate or don’t think it wise at this time.

First, you communicate to your children that their father doesn’t treat them the way God would have them treated. You don’t disrespect your husband, but you do tell them the truth. That daddy has some issues that keep him from being a good father (And if you believe your husband wants to be a good father, you can say that too).  It’s not their fault that he acts that way and together you can all pray that daddy will listen to God instead of being caught in his angry feelings. That even when kids do things wrong, parents are supposed to discipline their kids in a loving way.

This is not being disloyal to your husband but helping your children face the tough reality of their current living situation. It’s important that you help them “think” truthfully or see what’s happening clearly. Children always internalize their parent’s words as if they are true. Children also feel responsible for their parent’s anger and bad behavior, especially when that parent blames the child for the sinful way they behave.

“It’s your fault I lost my temper because you didn’t do what I said,” is common.

It’s imperative to your children’s emotional, mental and spiritual health that you give them the correct view of what’s happening. That daddy doesn’t know how to handle his emotions very well. Or daddy didn’t learn how to be a good daddy from his daddy. Yes, kids do things wrong, kids don’t always listen or obey and parents are supposed to help kids learn to obey and listen, but not scream and yell at them or call them names or scare them.

Second, it’s important that you try to develop some sort of safety plan with your children when dad starts with his verbal vomit. Whether that means all of you get in the car, or go for a walk, or do something in another part of the house you are going to do what you can to create a bit of space to give dad a chance to cool off.

Third, you might need to have a heart to heart with your husband that goes something like this. “I love you too much to allow you to continue to ruin your relationship with your children. I know you think you are doing better than your dad did (if that is an issue). Or, I know you don't think what you are doing is that serious but our daughter has already suffered the consequences of living in this environment and I won’t allow the others to continue to be beaten down.

From now on when I see you getting frustrated or angry, I am going to take the kids for a timeout (whatever you agreed to be your safety plan) and give you a chance to cool down and control yourself before you speak with them. I know you want to be a good dad (if you know this to be true). This is for your good as well as theirs. It is not okay to berate them (or whatever else he does), just because they misbehave. They are children.”

The last resort is separating. That may be the only wake-up call that he will listen to. I’ve had so many men call me in a panic because their wife finally followed through with what she said she would do. Before that, he never took her words seriously. But I know for some, it’s just not possible or you are not ready.

However, if you start doing what I suggest and he escalates and you or your kids feel unsafe, then it may be time to move toward separation. I know this is the last thing you want, but that might be the only thing left that keeps your children safe and gives your husband an opportunity to wake up to his destructive ways. What you are trying to communicate is, “You don’t sow a crop full of weeds and then expect to have a beautiful garden” (Galatians 6:7).

Remember, seeking your husband’s good (helping him to become a better dad – i.e. repentance with grace-filled truth) is being a godly wife, just like disciplining your kids in love is being a godly parent, even when they don’t see it or appreciate it.  Click To Tweet

Friends, what other ideas do you have to help this woman be both a godly wife and a good mother?