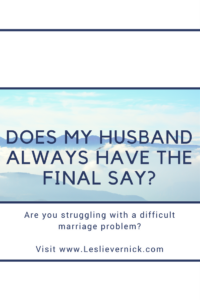 Today’s question comes from your comments last week about the issue of headship and submission. A reader said, “My husband won’t let me work even though it’s a job I would love. His reasons are lame but I have no choice, I have to submit.”

I won’t be able to cover everything around this important topic but I want to give you a few things to ponder so that you can make the best, biblically informed decisions you can in your particular situation.

But before I get into specifics, I want to frame this whole topic of headship and submission by saying that we don’t biblically unpack these important topics by finding one or two verses to see what God says about the subject. Rather, we must look at the entire Word of God in context so that we can begin to understand what God had in mind about marriage and his plans for human beings in general.

If we look at God’s idea of marriage, God created Adam and Eve to be mutual partners. They didn’t have a hierarchical relationship as far as we can see from the account in Genesis. For example, Genesis 1:26-28 tells us God said, “Let us make human beings in our image, to be like us. They will reign over the fish in the sea, the birds in the sky, the livestock, all the wild animals on the earth, and the small animals that scurry along the ground.

So God created human beings, in his own image. In the image of God he created them; male and female he created them. Then God blessed them and said, “Be fruitful and multiply. Fill the earth and govern it. Reign over the fish in the sea, the birds in the sky, and all the animals that scurry along the ground.”

He didn’t give his command to only Adam, but also to Eve. Both were created in God’s image. Both were to reign over the animals. Both were to fill the earth and govern it. That means that Eve was free to make choices and decisions, as Adam was, even if she chose poorly as she did when she listened to the serpent and disobeyed God.

Sin messed everything up and did impact their marriage. God said to Eve, “And you will desire to control your husband, but he will rule over you” (Genesis 3:16). This power struggle between husband and wife was not God’s original plan, but a result of the curse of sin.

In the New Testament, Paul tells us that if we are in Christ, Christ freed us from the curse of the law and the curse of sin (See Romans 5:12-21 and Galatians 3:13). The result of this freedom leads us to a renewed understanding of God’s intention for all human relationships.

One person is not superior, better, or over another because they are a certain race, social status, or gender. Paul concludes this section of his teaching when he declares a radical statement for a culture that practiced class, race, and gender divisions. He said, “There is no longer Jew or Gentile, slave or free, male and female. For you are all one in Christ Jesus” (Galatians 3:28).

It is in this context that we must read Paul’s instructions in particular to husbands and wives in Ephesians, Colossians and 1 Corinthians.   In each of these passages, Paul emphasizes the mutuality and reciprocity of marriage.

For example, in 1 Corinthians 7, Paul talks about the sexual relationship in marriage. It was not a new idea that wives were responsible to fulfill their conjugal duties to their husbands. What was radical in Paul’s writing was the word likewise.   God called husbands to the same duty and responsibility to their wives as their wives had toward them (1 Corinthians 7:3-5).

To clarify the issue even further, let’s look at Jesus’ definition of headship. Biblical headship is never described using an authoritarian model of power over someone. In fact, Jesus intentionally modeled headship when he washed his disciples dirty feet and told them he was leaving them an example to follow (John 13:14,15).

When James and John, two of his disciples, were vying for who was going to sit at Jesus’ right hand in Heaven, Jesus stopped them and once again explained his idea of biblical headship or leadership. He said, “You know that those who are considered rulers of the Gentiles lord it over them, and their great ones exercise authority over them. But it shall not be so among you. Whoever would be great among you must be your servant, and whoever would be first among you must be slave of all” (Mark 10:42-44). Jesus expressly warned his leaders not to abuse their power just to get their own way or to boss people around (see Luke 22:25-26; Matthew 23:3-4).

Biblical headship therefore is defined by taking the lead in being a servant. It’s never defined as getting or demanding your own way. Paul supports this idea of servant leadership in his instructions to husbands when he says, “Love your wives, just as Christ loved the church. He gave up his life for her (See Ephesians 5:22-32).

When a husband uses the headship argument to justify making unilateral decisions for his wife he is misusing his position.

In the question we’re answering today, a husband told his wife she was not allowed to take a job she wanted to take and felt she could competently manage along with her household responsibilities.

But let’s carry this idea even further. If we see Biblical headship as a husband having authority to make all decisions on behalf of his wife and family, what if a husband decides his wife can’t visit her parents any longer? Or she can’t talk to her relatives over the phone or go out during the day without him? What if he decides she has to wear her hair short or long, give up her girlfriends, not go on the computer, eat fish instead of pizza?

What if he decides she’s not really sick so she’s not allowed to the doctor? Or, he doesn’t want her to volunteer at her kids school, or attend her best friends wedding? What if he wants her to wear mini skirts, or get breast implants? How much authority does a husband have to take over the decision-making choices of his wife who is an adult woman, created also in God’s image? 30%? 75%? 50%? 100%?

Jason Meyer, pastor for preaching and vision at Bethlehem Baptist Church in Minneapolis, (John Piper’s former church) recently said, “Hyper-headship is a satanic distortion of male leadership, but it can fly under the radar of discernment because it is disguised as strong male leadership.Make no mistake—it is harsh, oppressive, and controlling. In other words, hyper-headship becomes a breeding ground for domestic abuse”(tweet that).

Jesus didn’t just teach us about headship, he also modeled submission. But Biblical submission is not just for women or wives. All believers are called to submit to authority (1 Peter 2:13), to one another (Ephesians 5:21), and to God (James 4:7). I have often found the person who demands unchallenged authority and decision-making power over another person often refuses to submit his own self in each of these areas. He won’t submit to authority –he makes up his own rules. He refuses to submit himself to others, or even to God. These individuals are called dictators, biblical fools, not biblical leaders.

Please hear me. Submission is an important discipline for all believers. It challenges our self-centered orientation and teaches us we don’t have to have our way all the time. That is a good thing in marriage where you have two sinners arguing, or in a family where everybody has their own ideas or preferences, or even in a church where factions and disunity could rule if mutual submission was not practiced. However, Christ shows us that Biblical submission is always a voluntary position that is taken by the one who choses to submit (see Philippians 2:6-8). When a wife is not allowed to make choices, how can she voluntarily choose to submit?

Biblically a husband is told to take the lead in serving. Biblically a wife is told to take the lead in submitting. Does that mean a wife never serves? No. Does that mean a husband never submits? No. When the relationship is functioning as God intends, both serve and both submit and it’s a beautiful thing. The destructive elements become obvious when one person is told she must serve and submit and the other refuses to serve and submit.

So what do women do within such an unbalanced marriage? How does she honor God and respect and even choose to submit to her spouse without dishonoring herself by allowing herself to be abused, controlled, or turned into a child?

Friends: How have you navigated submission in your marriage when your husband is hyper controlling?