Tell me a little bit about your situation before working with Leslie and her team. What led you to want to seek out some guidance?

My husband was involved in an affair that was going on for 5+ years. He was continuing to lie to me, constantly trying to make me believe that he was getting out of it. It was a horrible situation and I was not equipped to deal with it in a productive way. I was completely falling apart and it was destroying me and my family.

My daughter had attended a conference that Leslie spoke at and she bought her book for me. After reading the book I realized I desperately needed help to deal with the situation. I contacted Leslie and was fortunate enough to be accepted as a client.

How did you find out about Leslie and her team? What were your first impressions of them?

As mentioned above, it was through my daughter. After reading the book, I believed that they had the tools I needed to come through my situation in a Godly manner.

I was so thrilled to be accepted.

How is your situation changed since working with Leslie and her team? What positive changes have you made.

Where do I begin? First of all, understanding the manipulation and emotionally destructive abusive behavior was such an eye opener. The truth that the lies my husband was telling me weren't not nearly as destructive as the lies I was telling myself was life changing. I realized that I continued to accept his lies because I wanted to believe them. I finally began to face the reality of the situation.

I loved that I was given a recording of each of our sessions. I listened to each one and actually transcribed them so I could go back and work through them. I needed to remind myself constantly of the things I was being taught to do.

Leslie and her team gave me the courage to file for divorce, which was granted 2 years ago.

(there is much more to this story, it is ongoing, and I am actually working on putting it together in book form, which I've had so many people suggest I do – whether or not it will ever be published, I have no clue – it is up to God.)

What were some of your biggest “ah ha” moments while working with Leslie and her team?

So many of them.

The lies my husband tells me not nearly as damaging as the lies I tell myself.

I really struggled with control issues. We would get into screaming matches. Leslie's team taught me some ways to walk away and not get involved.

I was struggling at work with concentrating on my job. They helped me learn how to overcome that.

I liked that Leslie ‘coaches' rather than counsels. Our conversations were a useful tool to look honestly at the situation and do worst case scenario and face it. Once I was able to face the worst case scenario and come up with a plan around it, I was able to deal with it. I cannot tell you how much that has helped in so many situations. I've also shared that with others and it has really helped them as well.

Any tips you would give to someone in a similar situation?

First of all – read Leslie's books. Then if at all possible sign up for coaching or at least do the group counseling. Don't wait 3 years into it like I did. Do not expect the situation to change. Don't allow him to put it on you – it is not you.

Don't get embroiled in the trash. Don't get into it with either him or her – particularly not her.

Proverbs 15:22 – listen to the wisdom of wise counsel. However, be careful who you listen to. One of the many things I appreciated about Leslie – she did not tell me what to do. She laid out options and made it clear if I stay, to stay well – and gave tools for survival. 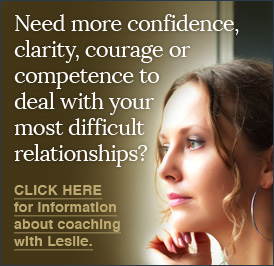 Look at the great results people achieved from coaching with Leslie!The coaching sessions have been an eye opener for me and surprisingly superior to some of the counseling I have received in the past. I think the limited distractions of travel time, person and place allowed me to focus more on what you were saying, hear you better and get deeper into my own experience. Your style is objective and goal oriented and yet you are very empathetic to the pain experienced and the slow process of growth. Some of the conversations are still alive in my memory and are a source of continued encouragement towards my stated goals. I gained a lot from the sessions because they were Christ centered, focused, relaxed and profoundly effective. Thank you so much.
Cynthia.Wow! I am so grateful for the opportunity to work with Leslie. I learned not only to recognize, but to deal with, some life-long struggles. I feel more confident in my ability to make decisions (a BIG thing for me!). I feel that I can move forward in this phase of my life better because I have some tools that I did not have prior to working with Leslie, whether they are for personal growth, marital/family relationships and life in general.
Terri D.Going through the coaching process with Leslie has been a very positive experience! I specifically sought her out because I wanted to work with someone who:1)Understands the unique dynamics of an emotionally abusive relationship 2)Wouldn't just tell me what she thought I wanted to hear 3) Looks at all of life from a biblical perspectiveI''ve gained clarity as I''ve spoken with Leslie about my difficult marriage and issues with my children, and feel better able to move forward with confidence and a renewed perspective after working with her. I highly recommend the coaching program!
Woman stuck in a destructive marriage (T.L.)"Leslie has a gift of asking the right questions and pin pointing ''twisted thinking''. Much of my thought process stemmed from childhood and was made worse with an emotionally abusive man. She coached me, and coaxed me to find out what was keeping me stuck.By the time we finished our first ''phone session'' I had a new key to life and who I was!I could write on and on about how grateful I am for all you have done!"
50 year old Interior designer who was stuck in her business and life.

"I'm able to be more present without feeling anxious, I'm setting better boundaries, I'm communicating more clearly, I'm not procrastinating, especially in the areas of conflict, I'm more organized at home, and I'm just enjoying being alive. Thank you."
Susan N. single professional woman"Underneath massive changes have been taking place in my life and more importantly in my understanding of the problems and limitations within which I am functioning. You have helped me tremendously to see more clearly where I have obstacles over which I must overcome, both, internally and externally.Considering my circumstances, I cannot have imagined anyone else who could have helped me in the way you have helped me. Your coaching, encouragement, wisdom, insight, perspective and prayer have been an answer to prayer for me. Thank you."
Tom, a 40 something professional in a difficult marriage.