He Says I Abused Him When I Resisted His Control

Since we’ve been discussing whether or not Christian women should resist the oppressive control of their spouses or even church leaders and how that resistance should look, I thought this question was timely. 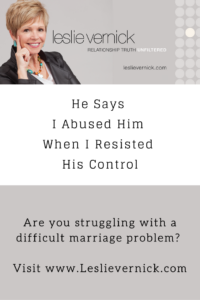 Question: I separated from my husband after 48 years of marriage because of his emotionally destructive and sometimes physically violent behaviors toward me. Now he says that I was the abuser in our marriage, and he is insisting that I apologize to him. There is some truth in what he says, however, I do think I was only showing some reactive and some resistant behaviors to his abusive ways. What should I do?

Answer: Although we’ve been on this topic for a few weeks now, I thought it would be a good idea to answer your question because your situation is not uncommon. As a Christian woman/wife, once you start resisting oppressive control and begin speaking and standing up against patriarchal oppression or abuse at home, you will be labeled as an ungodly and un-submissive woman. You may even be accused that your behaviors are sinful and abusive by those who believe that women should keep silent, suffer for Jesus, endure mistreatment for the sake of the gospel, and keep their families together at all costs.

This is what those who hold power believe. [Tweet “Trying to talk with them will not change their minds because they would then lose power and power is never willingly yielded by the more powerful to the less powerful.”]

That said, you were not specific on what you did to resist his abusive control over you that your husband labeled as abusive. But let me say this: Rage that is stirred in defense of human dignity (your own or someone else’s) is God-breathed. Rage born in defense of oppressive power is manipulative, deformative, and self-centered. God knows from where your anger and resistance came. Therefore, has the Holy Spirit convicted you that what you did was abusive? Did you intentionally pay back evil for evil or cause harm to him? If so, how would you like to handle that awareness? If not and your conscience is clear, then you have nothing to apologize for.

Your husband’s insistence that you apologize to him shows that he still hasn’t understood his oppressive and controlling ways. A sincere apology for wrongdoing is never demanded or coerced by the one who feels harmed. It is offered by the one who has done the harm, along with efforts to make amends and repairs for the damage done. He’s focused on your apology, but has he offered his own sincere apology for how he has treated you over the years? Or is he still blame-shifting and demanding your compliance? If so, nothing has changed. He’s still attempting to dominate and control you.

Your next steps are crucial. You have now separated. Yet you are still listening to him tell you what you should do (apologize). In this season you have new freedom to do your own work, think your own thoughts, and get healthy. I’d encourage you to take that path rather than do what he tells you to do. If he isn’t willing to look at himself and do his own work and look at all the 48 years of his abusive ways, then there is absolutely no hope that things will ever be different if you move back home.

You separated for a good reason. Don’t lose ground by allowing yourself to be manipulated and controlled while apart. If you do sense your need to apologize, ask God if it’s wise to verbally apologize to your husband, or right now, simply confess it to God. Sometimes abusers use your apology as a weapon to further antagonize, demonize, torment and abuse you. If you think that might happen or have experienced that in the past, please make sure you get some help in discerning your next best steps forward.

If you do feel led to apologize to him, perhaps you can do something in writing, with no further contact. You might say something like: “I wish I had been stronger to handle myself in a better way when I got so angry and (did ……..or said…….). I’m sorry I said ………and I’m not sorry I left. I have been unhappy with the way you’ve treated me for years. I’ve tried talking with you and nothing I said made any difference. I should have left before I allowed myself to get so depleted and worn down. That’s my mistake and my lesson to learn. I will not return to a relationship where I am treated with (whatever your experience was here) .”

[Tweet “Don’t demand he apologize. That can only come from him and if he does it, look at his actions, not his words.”] Is he willing to understand the harm he caused you over the years? If not, he is using words to get a free pass to say he’s sorry and then do it again? Don’t allow that. You took a giant step forward by separating. Now continue your next right steps forward, even if they’re baby steps.

Friend, when someone has gotten the best of you and you reacted or resisted in ways that dishonored your own self, did you apologize? If not, why not?

Morning friends, We had an amazing CONQUER conference. It could not have been better. Over 800 women showed up from all over the US, Canada, and even Germany to be with us. God’s presence and Spirit were clearly felt. Vocal soloist Nichole Nordeman was so raw and real. Lots of tissues were used as she…

How to I make good female friendships? I’ve been burned.

As most of you know, I spent a week in January, pausing my life in order to refresh my spirit, recharge my batteries, and reconnect with some of my girlfriends. I had a wonderful time laughing, crying, praying, resting, exercising, and being challenged by some wise and wonderful women. I highly recommend taking some time…

Morning friends, I’m here in Chicago for a few weeks visiting family. I am appreciating the cooler weather but I am getting homesick. Getting out of my regular routine and surroundings is good for a bit, but I’m a regular habit girl and I can never seem to find my stuff living out of suitcase…