We’ve had a great discussion on our blog regarding suffering and whether or not an abused wife should willingly suffer in an abusive marriage. I’m so glad that women are waking up to the error of this traditional teaching.

Here’s another question I receive often that I want to help you think through. 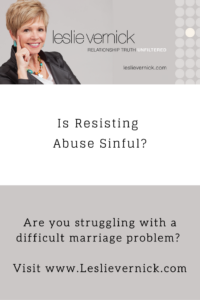 Question: My pastor says that my husband and I are both sinners and I am just as emotionally abusive as my husband when I refuse to submit to his leadership. Is this true?

Answer: If I had the opportunity to rewrite my book, The Emotionally Destructive Marriage, I would talk more about this concept and clarify the distinction between reactive abuse and resisting abusive control.

Reactive abuse is when you or someone else do not handle provocative situations in a mature or healthy way. Instead you allow your negative emotions to decide how you will respond. You get aggressive and hurtful, even harmful toward others whether verbally or physically.

Road rage would be a good example of reactive abuse. You’re angry someone cut you off or is driving too slow and instead of handling those feelings in a mature way, you react and can cause great harm to others by your reaction. The Bible warns us “In your anger, do not sin” (Ephesians 4:26). Why does it warn us? Because when we feel angry, we feel most entitled to be reactive and retaliatory. We see this happen all over our world right now. People are angry about all kinds of things and not always handling their anger in wise or mature ways.

In a destructive marriage, when a victim assertively and/or aggressively stands up to her oppressor, pastors or people helpers often label her behaviors as reactive abuse. He sinned, you sinned. You're both guilty of abusive behaviors. However, a better description of this dynamic is that the victim is resisting the control of her oppressor. I wish I would have explained this more in my book and answered more directly the question, is resisting oppressive control sinful?

To answer this question, first let’s look at where controlling abuse is found in the Bible. The Bible calls it oppression, lawlessness, and abuse of power. Here are some verses you can look up for yourself to see what Scripture says. Proverbs 21:2; Psalm 10; Ecclesiastes 4: 1-3; Micah 2, 3; Psalm 43:2

We see God tells his disciples not to misuse their power to oppress others. Mark 10:42-45;

We see Paul tells husbands not to be harsh with their wives Colossians 3:19

When the Hebrews were slaves and oppressed by the Egyptians, God saw what was happening.

Moses told the people of Israel what the Lord had said, BUT THEY REFUSED TO LISTEN ANYMORE. Why? Because they had become too discouraged by the brutality of their slavery. God doesn’t shy away from the hard truth and the devastating effects of oppression on one’s body, soul and spirit. His people were worn out and struggled to believe that God cared.

Maybe that’s where you are right now. You’re too discouraged, too angry, and can’t hear from God anymore either. Can’t wait anymore for God to work. Can’t listen to his ways because of your own discouragement and pain. If that’s where you are, I want you to know, God sees you and understands.

He saw Haagar – a slave that was mistreated by her owner, Sarai – Abraham’s wife. When Haagar ran away she was alone in the wilderness, despondent and ready to give up. When no one else saw her, God did. When she realized it she said, “The God who sees, sees me.”

When a husband misuses his position as the head to dominate and control a wife’s thoughts, feelings, decisions and her very person, he is not exercising appropriate headship and she is not sinning or being ungodly when she resists his attempts to control her. She is an adult, and with adulthood comes the responsibility to steward one’s own life. Marriage doesn’t demote an adult woman to the status of child. But even children as they grow up and mature start resisting oppressive control of parental authority.

As a mom you will see your child appropriately resist your control over her as she grows. This is a good thing. For example, remember when your little one told you “I can feed myself. I want to hold my own fork. I can dress myself. I’m not wearing that shirt or skirt. I don’t like peas. I don’t want to take piano lessons anymore.”

This individuation and separation from you as her parent helps her become a person in her own skin. A person who can make decisions, can think, can handle life wisely and maturely without you helping her all the time. This independence is gradual and comes with growing maturity.

However, when an unhealthy parent exerts coercive control over a growing child, especially as she enters adolescence and adulthood, the child will either strongly resist (which is a good thing) or collapse and comply thus becoming emotionally crippled as an adult. The child is not sinning or being disobedient by resisting that parental oppressive control. How she resists may be sinful, but the resistance itself is not sinful or dishonorable. It’s healthy and necessary.

That’s why it makes no Biblical sense to believe or teach that an adult woman who chooses to get married, or is in an arranged marriage which still happens in certain cultures, now must regress her adult status and decision making power to the status of a small child who cannot make choices for herself. Instead she must yield to the total control and authority of her life to her husband to be considered a godly wife.

The Bible teaches that submission is an important spiritual discipline for all believers to practice. Submission teaches us that we don’t have to get our way all of the time. When we live in community whether in church or family, it’s important for everyone to learn to submit one to another. However, submission never means you have no choices. Even the choice to submit or not submit is a choice you make. [Tweet “To be forced to submit isn’t called biblical submission. It’s called coercion, intimidation, and bullying.”]

Therefore is resistance to oppressive control sinful? No. Here are some Biblical examples:

Exodus 1:15-22 Two women named, Shiphrah and Puah are Hebrew midwives. They are told by the Pharaoh that they are to kill all baby boys because the Pharaoh was threatened by the growth of the Hebrew people. The Bible says, “Because the midwives feared God, they refused to obey the kings’ orders. They allowed the boys to live too.

When Pharaoh called to them and asked why did you allow the baby boys to live, they lied. They said “The Hebrew women are more vigorous than the Egyptian women and have their babies so quickly that we cannot get there in time.” And the Bible says, So God was good to the midwives…..and because the midwives feared God, he gave them families of their own.

They lied to protect the innocent from harm. Is lying a sin in this instance? No, it was good to resist oppressive Pharaoh and God rewarded the midwives.

The Bible says if a woman is being raped, she is to resist by screaming for help. If this happens in a place (the countryside) where no one could hear her, she is not to be considered responsible or guilty. Only the man is. She is a victim and she resisted that oppression or act of aggression against her (Deuteronomy 22:25-27).

King Saul was jealous of his servant David because he was becoming more popular with the people after he killed Goliath. Saul tried to kill David and David ran away. David resisted the King's orders and did not stay passive. And God protected David. Yet when David had a chance to retaliate and kill King Saul, he did not, but also let him and his men know that it was in his power to do so, but he chose not to retaliate or seek revenge even though he did resist King Saul’s authority. (1 Samuel 24-28)

Jesus fled when the religious leaders were upset with him and sought to throw him off a cliff. (Luke 4:29).

Both Peter and John refused to be silenced by the authorities when they told them that they weren’t allowed to preach anymore. They resisted but also were willing to accept the consequences of beatings and jail time. (Acts 4-6)

[Tweet “Self-protection is not unbiblical or ungodly.”] It’s how God wired you. When you resist or even react in order to protect yourself or your loved ones from harm, your action is not considered reactive abuse or sinful. You have not initiated violence or harm towards another in anger or out of revenge, but you are protecting yourself and in doing so, harm to another may be the consequence. (See Nehemiah 4:11-15; Ecclesiastes 4: 9,12; Exodus 22:2,3).

You might be thinking that the New Testament is different. Jesus doesn’t want his people to fight back. Jesus is very clear. We are not to retaliate or seek revenge against someone who harmed us. That is not God’s way. Yet Jesus does tell us what to do when being oppressed and it’s not to stay passive and accommodate the oppressor. Jesus teaches us how to resist oppressors in a godly way. Stay tuned, next week, I’ll give you some examples.

Friend, have you been accused of being abusive when you were simply resisting someone’s oppressive control over you? How did you handle that?

Does God Want Me To Suffer?

Morning Friends, This week’s topic is one that underlies most Biblical counsel women in destructive marriages receive. It is something that we must understand if we are going to wisely deal with a destructive spouse. It is the issue of suffering Suffering is universal, and we will all experience it at some point in…

Does God Care More About Sex Than Marriage?

Good morning friends, Thank you for all your comments and notes encouraging me to continue writing this blog. I want to serve you and meet your needs and so I appreciate the feedback. I was in Dallas, TX all weekend speaking at the Wonderful Counselor Conference, so what I thought I’d do is share with…

How to Get Negative Words Out of Your Head

Morning Friends, My new website has launched, and we will be moving the blog over there permanently in a few weeks, so please go there and sign up to receive it if you haven’t already done so. Just go to www.leslievernick.com and, on the home page in the upper right hand corner, sign up for…