My Daughter Is Dating A Boy She’s Crazy About

Today’s question is a little different in that it is a parenting question from a concerned parent. If you have worried about your daughter’s dating partner, or if your parents did or said something that helped you wake up to the danger in your dating relationship, please share with this woman to help her get through to her daughter that something may be off or dangerous in her boyfriend. 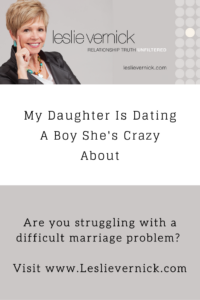 Question: My daughter is dating a boy she’s crazy about and he seems to be crazy about her but I don’t have a good feeling about it. She’s stopped hanging out with her friends and dropped out of some of her school activities just to spend more time with him. She met him at the church youth group but his parents do not attend our church. She’s 16 and I don’t know what to do. Her father was abusive and we’re now divorced. I don’t’ know whether I’m just hypersensitive to this whole thing or she’s picking someone like her dad. What are things I need to look for or what can I tell her?

Response: I know it’s tempting to think you are reading into things, but I’d trust your gut instinct. Did you know that:

40% of girls age 14 to 17 report knowing someone their age who has been hit or beaten by a boyfriend.

Nearly 1 in 5 teenage girls who have been in a relationship said a boyfriend had threatened violence or self-harm if the couple were to break up.

1 in 3 teenage girls has feared for their safety in a dating relationship.

It’s important that all parents, as well as teenagers, understand what a healthy relationship looks like and be able to identify the first signs that the dating relationship may be unhealthy and potentially abusive.

People usually put their best foot forward in dating relationships. It’s not always easy to tell whether a dating relationship is healthy. However, as I’ve said before there are three essential ingredients for any relationship to flourish. They are mutual caring, mutual honesty, and mutual respect.

A young girl can be totally swept off her feet by an intense young man’s obsessive love for her. It feels so intoxicating that she believes it is true love. But over time he becomes more controlling. He isolates her from her friends and family in order to maintain that control. You sense some of that isolation has begun by noting your daughter is spending less time doing the things she used to do and less time hanging with her girlfriends.

What can you teach her? First, it’s important to teach your daughter how to say “no” and to be willing to say “no” early in any relationship. For example, when she says “No, I can’t talk on the phone right now, I have a test to study for or homework to do”, his response will help her (and you) see how she is respected and cared for. She needs to pay attention to what happens when she says “no” or “I don’t want to do something” her boyfriend wants her to do. Is there respect for her no, for her need to study? Does he care about what’s important to her or is their relationship all about making him happy and doing what he wants?

Is she free to express her different opinions as well as her own thoughts and feelings without fear? Honestly answering these simple questions can give her a good read as to the health of the relationship even after only a few dates.

Second, along the same lines teach her not to be overly accommodating just to please him or make him happy. She won’t be able to discern whether or not her opinions or feelings are valued if she doesn’t ever express them.

[Tweet “When you talk about dating in general, share with her that two red flags she needs to watch out for are possessiveness and isolation.”] Early in dating those things may be passed over as “he’s really into me” or “we just want to spend time together” but encourage her to also hang out with her friends again to see what happens when she does.

If she reports any kind of abuse, insist she break up with him. This is not the time for second chances or mushy grace. [Tweet “Christian women have sometimes been taught forgiveness means endless second chances.”] Ending the relationship is the best for her and for him as he learns that he cannot treat people this way. By doing this she also learns she does not deserve to be treated this way and God doesn’t ask her to sacrifice herself to keep him happy.

Here are some extra resources that can help you help her:

Friend, when you have been in that situation, what advice would have helped you?

How Do I Rebuild My Life

Morning Friends,   I am in Round Top Texas, the place where Joanna Gains from Fixer Upper from HGTV loves to find great antiques. I’m here for my yearly retreat with women I love. We’ve been gathering together for ten years now and it’s amazing the love and support a group of godly women can…

Topic: My friend is depressed. What can I do?

Good morning friends, As you think of me, pray for wisdom as I work on my new book The Emotionally Destructive Marriage. The task seems daunting and overwhelming at times. I’m encouraged by your kind words but desperately need your prayers. Rejoice with me, I will be doing an interview with Focus on the Family…