He Has Aspergers, Do I Stay?

It’s been a hard week and I’d appreciate your prayers. It’s hard all over and for everyone for sure. We need one another’s support and prayers for times like these. As I’ve been struggling and wrestling with something in my life, I’ve learned to press pause and remind myself that I do have choices. I can cope in good ways or bad ways.

For example, when I’m stressed, I overeat. But I’ve learned to press pause and ask myself what’s my best choice here. I can eat a box of cookies, or I can go for a walk. Both work to feel better. At least temporarily. One is a healthy choice and I still feel better after the walk. The cookie choice, not so healthy. I feel calmer while eating them and later feel regret. Paying attention requires my ability to pause, notice and then choose. Today’s question reflects that opportunity for this person as well. 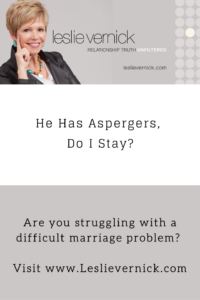 Today’s Question: My husband was diagnosed with Asperger’s over a year ago. He’s an engineer and 56 years old. I was separated for two months living in the same house with him with my children. He promised he would work on the marriage so I called off the divorce.

For 15 months every two weeks, our therapist and I would ask him why he’s not doing the simple things I’m asking him to do. For example, find a movie for us to watch on TV, ask me to take a walk in the park, read some literature of yours to learn more about marriage and how I’m feeling empty.

He says he feels fully filled. He has no remorse, he doesn’t change. He’s been getting told this for 15 months he’s lying to my face being deceitful lying about me in front of my child trying to say he can’t trust me when I’ve never given him a reason not to trust me in 20 years.

I have worked hard having a diagnosis of bipolar for the past 15 years. I don’t have episodes, I don’t go crazy, I am fully in control of my emotions. My question is if he’s not working on the marriage for the past 15 months when he is supposed to be so happy and I gave him another chance to have his family together and have his wife and his income, do you feel since he takes no responsibility for his actions or even cares about how I feel at all and is it OK to finally divorced and throw in the towel?

I’ve also been seeing my pastor at my church for the past 10 years dealing with past pornography problems and other marriage problems so I faithfully go to Christian therapist and pastor and they know how he has been treating me and they say I’ve been emotionally neglected and it’s the indifference that you talk about. I just feel like I can’t go on anymore in this relationship. At 46 years old I feel that I will be losing my sanity If I continue in this crazy cycle that benefits him always and never me.

Answer: It sounds like over the years you’ve worked hard on yourself. You’ve also brought his problems to his attention and competent people helpers, yet nothing really changes. How long do you keep hoping? How long do you keep bugging and badgering him to do what he says he will do? How long do you live this way when nothing is changing? These are your questions to wrestle through. No one can answer these for you but you, because you are the one who has to live with the outcome of your choices.

He says he’s fine. He’s content, he’s happy, he’s not hungry. Neuro-diverse individuals are handicapped in certain ways. They are incapable of understanding nuanced emotions and differences in people. They are self-referencing. Meaning that they don’t naturally see other people’s needs, feelings, or problems. If they don’t have that need, feeling, or problem, then you don’t or shouldn’t. If he feels fine with the way things are in your marriage, then you should feel fine too.

However, when a neuro-diverse individual accepts the diagnosis that they aren’t “seeing” the world correctly, then we hope that he/she would now be more open to feedback, instruction, and correction. For example, if your husband realized that he was color blind, I hope he would receive your feedback on his clothing choices (especially if he wanted to look his best). Purple pants and a green shirt may not be his best choices if he had an important presentation to give at work.

Professionals have told him he isn’t “seeing” correctly regarding how to do marriage/relationships. You have told him “I’m lonely, I need more, I am not content or happy.” In other words, you’re saying, “even if your tummy is full of food, mine isn’t. I’m still hungry.” Yet he doesn’t respond appropriately. He makes no effort to “feed” you emotionally by taking the initiative to do the things you or your therapist have asked him to do. In his mind, if he’s not hungry, you must not be either. (Which is the Asperger’s). But when you say, “that’s not true, I am hungry” he refuses to adjust his behaviors. That’s not Asperger’s. That’s selfishness and indifference. What does that mean for you?

Frankly, it means he doesn’t want to change. It means he isn’t interested in learning how to feed your needs or nourish your spirit. But you have bigger problems than his diagnosis of Asperger’s. It’s not simply that he doesn’t “see” that you’re hungry (which is his Asperger’s) but that he doesn’t care (toxic selfishness). In addition, he’s undermining you with your child, accusing you of breaking trust, telling lies that are not true. (That behavior is not Asperger’s).

Now you have to think through your next steps because if you’re not conscious of all your choices, you may default to some unhealthy ways to cope. Here are the most obvious choices in front of you.

1. Unhealthy – Stay focused on getting him to change. You’ve been here. You’ve done that. [Tweet “Doing the same thing hoping for different results is the definition of insanity.”]

2. Unhealthy – Get more bitter and resentful when he won’t change and stop doing your own work because he won’t do his.

3. Unhealthy – Leave the marriage in a bad way, angry and bitter that he’s ruined your life and now you have to live alone.

4. Heathy – For now, grieve your broken dream of him changing and having a good marriage. Accept reality. He doesn’t want to change. Now you have some new options from this place.

Option 1. Stay in the house/marriage without expecting/waiting/begging for any emotional connection. Only you can decide whether you can do this in a good way whether for the short term or more permanently. You might choose this option because despite his emotional anorexia and selfishness, he’s a good financial provider or you need his medical insurance. Perhaps you have local family and grandchildren that you enjoy visiting and/or your church is a strong source of support and you can build a life independent of him to meet your emotional needs.

Option 2. Communicate to him that you regretfully accept he has no interest in changing and being a “husband” in real-time. And because of that, you are unable or unwilling to “pretend” that you have a marriage. He’s consistently shown he’s not willing to heed the wisdom he’s been given or do what they have suggested, you will now live separately or get divorced so that you and he can be at peace.

[Tweet “Once you accept he’s incapable and unwilling to do what you need, your new question becomes how do you feed and nourish your own self?”] What kinds of activities, friends, purposeful things would make your life feel more interesting, creative, nourishing, and fulfilling to you? Even if he’s content watching television all weekend, you don’t have to be. You can start to build your life in a way that brings you joy.

Friend, how do you press pause and start to become more aware of all your choices – both healthy and unhealthy before moving forward?

Is There Hope For A Narcissist?

Morning Friends, I want to make a few comments about the purpose of this blog. I wrote this in response to some other comments within the blog but I wanted to share it with you all. First, I am not providing personal counseling within this blog for the individuals posing these questions. I am providing,…

How Do I Live With A Perfectionist?

Morning friends, This is a busy week. We have our virtual CONQUER CONFERENCE this coming weekend and have over 750 women from all over the world attending. Pray for my health, stamina, and all the other speakers and workshop presenters and attendees that they would be encouraged, loved on, and connected more to God and…