I’m scared. The world has turned upside down over the past week just as we thought things were returning to normal. What do we do with our body when it’s still shaking after watching the news? Or our mind when we see pictures of children dying and mothers fleeing their homes with littles in tow? Or our emotions seeing the horror inflicted on people who refuse to give in to a bully dictator?

Now just imagine when you live at war in your own home. War at home where bully dictators called husbands demand their way, demand control over a person they have no right to control, their wife. Independence is not allowed. Non-compliance means punishment. Compliance and obedience are demanded. 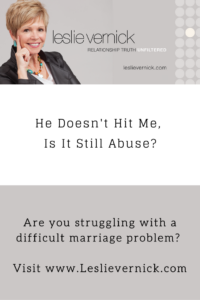 Question: My husband says that his behavior is not considered abusive because he doesn’t physically hit me. Is it still abuse when he controls all the money and won’t let me make any decisions of my own? He says God says he’s the head of our home and I must submit.

Answer: Thank you for asking this question. It’s crucial that you understand an important dimension of abuse. If not, you will miss the bigger picture as Christian people helpers often do.

Domestic abuse is never directly about hitting, slapping, or punching. A pattern of physical violence in marriage happens for one purpose: control. An abuser becomes physical in order to more fully dominate, intimidate, humiliate, and scare you so that you do what he wants. It’s a means to get you to stop resisting or refusing to do what he wants. If he can scare you or harm you, you are more likely to comply with his agenda. Right?

That’s why a woman who separates from a destructive spouse can often be in more physical danger than before. Her abuser fears losing control over her. She’s defied him. She’s left him and now she will pay. That doesn’t mean a woman shouldn’t leave if she needs to, but please if that’s you – do it wisely. Please get a safety plan in place before you leave by visiting your local domestic violence shelter or call the DV hotline at 1800 799 SAFE (7233) and they will walk you through a safety plan for your particular situation.

However, without ever being physically violent, a husband can control a wife with intimidating looks, threatening gestures, name-calling, breaking furniture, punching holes in walls, and misusing Bible verses. These are meant to scare you and/or guilt you into compliance.

This “power over” dynamic is not defined as Biblical leadership or godly headship. It’s called bullying and has a huge negative impact on a marriage. It assaults the God-given dignity of you as his wife. A person who God made and God loves.

The writer of Proverbs describes the safety and trust embodied in a good marriage when he writes, “He trusts her to do him good, not harm all the days of his life.” (Proverbs 31:11,12). The marriage relationship must be rooted in safety and trust if it is going to be viable long term.

Romans 13:10 reminds us that love does no harm. That doesn’t mean love never hurts. But it does not intentionally cause harm to the other person and when it does, the relationship is not safe nor can you trust.

If you are a conservative Christian woman who ascribes to the traditional view of headship and submission, it’s important for you to understand how the Bible, not your husband, defines headship. Being the head does not mean your husband gets to make all of the decisions in the family nor all of the decisions for you as a person. It also doesn’t mean he gets to have his way all the time.

The Bible clearly has a different word for those behaviors and they’re not described as leadership, but selfishness. Jesus was very clear when he washed his disciple’s dirty feet that the leader serves others first. (John 13:1-17). A Godly leader initiates sacrificial servanthood as an example for the rest of the family to follow.

Even after Jesus washed his disciple’s feet and explained this to them, they still didn’t get it and started arguing among themselves who was going to get to sit at Jesus’ right hand (Luke 22:24-3). Jesus strongly reminded them that his form of headship or leadership wasn’t about being first or getting your way or dominating over other people. He told his disciples “You know that the rulers in this world lord it over their people, and officials flaunt their authority over those under them. But among you, it will be different. Whoever wants to be a leader among you must be your servant, and whoever wants to be first among you must become your slave” (Matthew 20:25).

When your husband uses headship passages as a means to control you, understand this is not God’s plan. It is part of an abuser’s strategy to get his own way and to control you through spiritual bullying and intimidation. It’s called spiritual abuse, not godly headship.

And that brings me to other forms of coercive control. [Tweet “Physical abuse alone is never sufficient to gain long-term control over another adult.”] Prisoners of war know that. Prison guards know that, and your husband knows that.

Ginny Nicarthy writes regarding a report on torture from Amnesty International. She says:

Most people who brainwash…….use methods similar to those of prison guards, who recognize that physical control over prisoners is never easily accomplished without the cooperation of the prisoner.

The MOST effective way to gain that cooperation is through subversive manipulation of the mind and feelings of the victim, who then become a psychological as well as physical prisoner.

What better way to control a Christian wife than through the Bible to make her feel guilty or ashamed when she complains that the way he treats her is harsh and unloving. What better way to make you feel afraid to speak up or stand up for yourself than by quoting scripture and telling you that you’re unsubmissive and selfish. That you’re ruining the family by refusing to die to yourself or submit.

What better way to abuse you sexually than to quote 1 Corinthians 7 and say that God says you aren’t allowed to say no. Your body is his to use however he wants. What better way to undermine your confidence as a person, a woman of God, and a mother and wife by constantly questioning your judgment, criticizing your choices, or reminding you how stupid, careless, thoughtless, selfish, or crazy you are.

What better way to keep control over you than to refuse to give you any access to the family money, no credit in your name, no joint bank accounts, or mutual decision-making financially. Instead of being treated like an equal partner, you are diminished to the status of a child or a slave.

Picture yourself in any other environment where you are constantly controlled, criticized, undermined, and devalued. What happens? Most people begin to shut down if they can’t get away. They get quiet, stop having opinions, or making decisions. It’s easier to be invisible than to be repeatedly questioned, squashed, or told your ideas are wrong or ungodly or just plain stupid.

Remember at its core, abuse is not physical. It’s not about getting angry or losing one’s temper. That’s why an anger management class is not an appropriate treatment for an abuser. He may stop physical abuse because he knows it will get him arrested.

He switches to other controlling tactics that aren’t illegal but usually just as effective.

Abuse is not about anger out of control. It’s about oppression and domination over another human being, often by shaming, degrading, and depriving them of their God-given dignity as well as seeking to suppress their God-given freedom and right to choose what’s best for them as well as to say no to another person, including their spouse.

[Tweet “To summarize, the abuse of power can be physical for sure as we’re witnessing in our world, but it also is mental, emotional, psychological, financial, sexual, and spiritual.”]

Friend, how did you understand you were being controlled, even if you weren’t being physically hit?

Good morning friends, Today I’m heading out to Virginia to do a webinar for the AACC (American Association of Christian Counselors) on domestic violence and emotional abuse. I will be taking some of the content from my new book I’m writing so you’re all invited to attend. There is a $10 charge for non-members and…

Setting Boundaries With an Adult Daughter

Morning Friends, I’m in Texas this week with some of my writing and speaking girlfriends. We do this once a year. It’s called Spa Week–although we’re not really at a spa. We’re at a Christian retreat center, in our sweats and sneakers, doing some exercising, walking and eating right, compliments of Carole Lewis and her…

Is It Wrong To Keep A Record Of Wrongs?[Guest Blog]

Morning friends, I’m excited to share with you a new book that’s just come out, Is It Abuse, by Darby Strickland. Darby is a colleague, friend, and fellow warrior in helping Christian women who are in abusive marriages get sane, safe, and strong. This book expertly and Biblically unpacks the whole concept of controlling abuse…