Is It Wrong To Go To Court?

Thanks for all your support for one another on this site. This next question does not have a one size fits all answer. But I thought I’d address it because many of you will face similar situations. How do you deal with injustice? Do you keep fighting or let it go, especially when letting it go costs you? 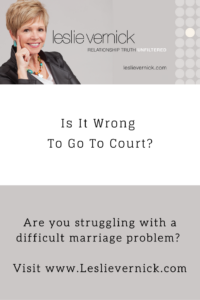 Question: While praying and fasting for answers to my painful divorce, God showed me 1 Corinthians chapter 6 where it talks about avoiding lawsuits with believers. It says in verses 7&8 “To have such lawsuits at all is a real defeat for you as Christians. Why not just accept mistreatment and leave it at that? It would be far more honoring to the Lord to let yourselves be cheated. But, instead, you yourselves are the ones who do wrong, cheating others, even your own brothers. Vs9 “Don’t you know that those doing such things have no share in the kingdom of God? Don’t fool yourselves…”

I’m fighting for money I put into our home for a kitchen renovation as well as a portion of our home because he paid off our home with non-marital funds so I don’t get my half. Long story short, is Paul saying that I shouldn’t take him to court, that I should just let myself be cheated because instead, you yourselves are the ones who do wrong, cheating others, even your own brothers? Thank you for taking my question!

Answer: Thank you for asking this question. I think it’s important for us to discuss and wrestle with difficult questions and Biblical teachings here on this site. We may not all agree at times, but I want you to learn to think through these matters and express your voice in an assertive, godly way. Plus, a multitude of counselors brings more wisdom.

Over the years I have seen women who are getting out of destructive marriages often treated unfairly and unjustly, in church and by secular courts. You said you are “fighting” to get your share of money in a kitchen renovation in the marital settlement. As you prayed, God led you to this passage in 1 Corinthians 6. I would pay attention as the Holy Spirit led you to read this particular passage in your particular situation.

First, I am not a theologian, but I think Paul writes here in 1 Corinthians in response to some previous communications around problems in the newly formed church. We can pick up some of this in 1 Corinthians 3 when he speaks of divisions in the church and how immaturely they behave.

In 1 Corinthians 5, he scolds the church for not taking action over a sexually inappropriate relationship happening within the church. He’s telling leaders not to be passive with grossly sinful behavior happening right within their own church fellowship. He’s saying stop ignoring it. Stop pretending you don’t see what you see or don’t know what you know. Stop being tolerant of this man’s sin. Publicly denounce it and put him under church discipline.

I think of this passage in light of all the excuse-making, hiding, excusing, deceiving, and covering up churches have done over the years. Churches who know their leaders or congregants are doing things that should not be tolerated such as the sexual abuse of children, racism, misogyny, sexually inappropriate relationships between those who are not married or married to other people, and abuse of Ecclesiastical power. Paul reminds us we’re all sinners, but the church has a responsibility to be an example of righteousness and justice and that giving grace does not mean covering over evil. (See also Ephesians 5:11). We must also remember that in that culture, there was not the legal protection in place against such abuses as there is today.

In 1 Corinthians 6, Paul continues his rebuke on the church for not having a place where financial disputes among members can be mediated and resolved in a godly way without bringing public shame to the church by heading to secular courts. Last, he concludes by speaking to the victim of financial injustice. He advises even if your church doesn’t handle it well or fairly, would it not be better to lose your money, than fight in a secular courtroom over this and potentially dishonor yourself, the other person, and God?

We have to look at Paul’s words in light of the culture in which he spoke. Are his words describing godly action for the people in that day and time, or were his words proscribing what Christians should do for all times in the future? It’s important not to take one verse or even one chapter of the Bible to see “what God says or thinks” about a matter. [Tweet “It’s important to look at the entire passage, who it’s written by and who it’s written to and where else does the writer of the Bible say similar things or things that may seem to contradict this passage.”]

I don’t necessarily believe this passage forbids Christians from using secular courts to settle financial matters, especially when we are not seeking to harm someone through the court but only receive a fair settlement on what we are legally entitled to receive.

For our purposes here, I see three essential truths that are clear.

1. As human beings, we long for justice. God is a God of justice. Yet we may not find justice in the secular courtroom (or the church for that matter). God is the ultimate judge and we need not fret over injustice on this side of Heaven although it may cost us financially as well as emotionally. Secular judges can be bribed and biased. We see this often in the courts today with women who are fighting narcissistic, entitled husbands who drag on custody and financial settlements in the secular courts for years.

2. As Christians, we should not ultimately depend on unbelieving judges or secular courts to give us true justice. Unbelieving judges are not wise in the Lord even if they are wise in the law. This passage in 1 Corinthians 6 is in contrast to Paul’s advice in Romans 13 where he says God puts in place governing authorities to protect us from evildoers who break the law. In1 Corinthians 6 Paul is talking about civil lawsuits with other believers over financial matters, not criminal suits over criminal matters or other kinds of wrongdoing. This is important because he is not forbidding us to call the police, press charges, or ask for justice in criminal matters. But it’s also clear churches have biases and ignore things that should not be overlooked (as in 1 Corinthians 5).

3. Last, when we have been wronged financially, Paul is not saying our only godly option is to avoid civil lawsuits and just graciously accept financial mistreatment. In his culture, he advocates that believers turn to the church for mediation of financial wrong-doing or settle matters of financial injustice through wise church advisors. This requires the church to have such a mediation process in place which is usually not available in our culture. In our culture, we have lawyers who might be Christians, who can mediate such matters wisely and fairly when possible.

Ken Sande’s Peacemaker’s organization has sought to be the model of godly arbitration for civil (financial) disputes among believers so that civil court can be avoided (following Paul’s advice in 1 Corinthians 6). This might be ideal in workplace disputes or church disputes where both parties are Christian and agree to abide by the decision of the arbitrator.

But what happens when there is an initial agreement to abide by the decision of the Christian arbitrator and then there is no follow-through in actually paying out the amount due financially? Then what? Peacemakers or churches have no “legal” teeth to enforce such an agreement. Then how do you respond? This can also happen in secular court financial settlements.

In divorce, there is a legal decree for child support or alimony, but no actual money comes forth. In these instances, is one sinning if you go back to court and sue for non-payment when you have to feed your kids or don’t have enough housing money or have been swindled out of most of your future retirement? Or are you supposed to let it go? Is it Biblically acceptable to continue to push towards greater legal recourse?

When someone has broken the law, even if it’s around money, is it acceptable to hold them legally responsible to make restitution or follow through on their agreement?

Only you can make that decision. Paul reminds us that life isn’t always fair. He advises that it is better to eat your financial loss than to lose your soul fighting over your rights. So many women I work with will never get justice from a church leader, a Christian arbitrator, or a secular judge on this side of heaven. Corruption and injustice are everywhere (Ecclesiastes 3:16). There comes a time when you must choose. Do I continue to fight? Or do I accept that I will not get justice this side of Heaven, but going forward, I will not allow injustice to destroy or deform me?

Friend, if you have battled through this, I would love to hear your words of wisdom for this dear woman.

Do I have to give him another chance?

Blessings Everyone! Lately I have been deeply grieved by the depth of our own self-deception and how it so impacts our relationships with one another. Being a counselor you’d think I’d get used to it but I don’t. Sometimes I have to confront someone’s self-deception. Even after all these years, it always surprises me when…

Is Numbed Out Better Than Feeling Sad?

Morning friends,   I’ve recently started taking my 3 granddaughters, ages 9, 8, and 7 hiking over Christmas vacation. Our first hike was short, about 1 and a half miles and easy. They loved looking over the mountain top, seeing the vista below. Eating snacks and being with Nana was fun too. They were game for…