Forgive and Forget, Is That Wise?

Loved all the interaction on the blog last week on emotional abuse. It’s so validating to know you are not alone and you are not crazy. Here’s another tactic that abusive individuals often use to guilt trip someone into silence around the offense. “If you forgive, then we can’t talk about it anymore. You have to forget.” Is that true? 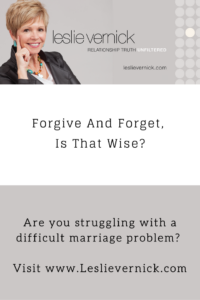 Today’s Question: My husband keeps telling me I have to forget the past if I’ve genuinely forgiven him. He says that I have not really forgiven if I haven’t forgotten his sin. I don’t want to make him feel bad, but I don’t think I’ll ever forget what he did. Am I wrong?

Answer: Counseling for over 30 years with couples attempting to recover from serious marital sin, I have often heard one of them say, “Why can’t you just forgive and forget?” or “You’re holding onto the past? Can’t we start with a clean slate?” or, “God says that we’re to forget the former things. Each day is a fresh start.”

Christian counselors and pastors are also guilty of using these same phrases when the one who has been sinned against feels stuck and is unable or unwilling to be silenced and continues to bring up past offenses or hurts in the counseling session.

[Tweet “There is a time for putting the past in the past, but doing so doesn’t mean forgetting the past, it means healing from it.”] Below are three reasons why you should not forget the past.

1. The past is instructive. The past reminds both sinner and sinned against that sin is always painful and destructive to someone. Remembering helps both of you to stay aware that you never want to return to where you were. It also keeps you both vigilant, so you don’t slide back into the old habit patterns that created the problem in the first place.

For example, Tom, one of my former clients, reminds himself every day that he is an alcoholic. To forget would mean disaster. One wrong decision could wreak havoc on his entire present life that he has worked so hard to rebuild. He attends weekly meetings and joined a men’s discipleship group where he remembers what it was like to be lost, drunk, hopeless and helpless and what it feels like to be rescued by Christ. He never wants to go back to his old life. Remembering he’s an alcoholic as well as a new creation in Christ, helps him know what to do when the lure for just one drink sings her deceitful song.

2. The past is often still the present. John swears he’ll never hit Sally again and feels insulted that she won’t let go of her “irrational fear”. He wants her to reconcile and trust him again. It’s true that John has not hit Sally for over eight months. But John continues to demonstrate attitudes and actions that are rude, selfish, and inconsiderate. He is consistently unable to empathize with Sally’s feelings and unwilling to respect her “no”.

John has not allowed his past to instruct him (about himself) but Sally has learned something from it. John may have learned not to hit her again (due to his fear of legal consequences), but Sally fears John’s heart has not changed. He continues to minimize his offenses, refuses to follow the counselor’s treatment plan, and is still ruled by his own desires rather than by Christ. Sally can’t and shouldn’t forget the past because if she chooses to stay with John (or is told by her pastor she must), their past as a couple will continue to be her present reality.

John demonstrates no new history (fruit of repentance) to give Sally any other data points in which to rebuild safety or trust. To trust his words when his behaviors don’t match them is foolishness, not godliness (see Proverbs 25:19).

3. Forgetting the past could put you and others in continued danger. Over the past few years, we’ve read numerous stories of church leadership covering up the sexual abuse of children in their congregations.

None of us know all of the details of these situations but, for whatever reasons, whether to protect the church’s reputation from ugly scandal or misapplication of Biblical forgiveness and forgetting, the leadership closed their eyes and allowed other children in their congregation to be vulnerable to a known sexual predator.

[Tweet “Sin always, always, always has negative consequences.”] Sometimes the consequences are short-term but other times they are permanent. If someone molested one of your children, no matter how much he or she repented, I hope you would never allow him or her unsupervised contact with any of your children or anyone else’s children that you know. You may forgive him or her, but you must never forget.

When we encourage someone to forget, we are asking him or her to do the impossible. God gave us our memory for a good purpose.

Remembering keeps us wise, so we don’t become repeat victims or continue to put others or ourselves in harm's way.

When a person guilty of a painful or repetitive sin keeps pressuring you to forgive and forget, pay attention. He is doing so because he is unwilling to do the hard work to learn from his mistakes. He is unwilling to be empathetic to the pain he’s caused you.

Instead, he wants to be free from the pain he feels and put it all behind him. In addition, he is unwilling to be held accountable by you and wise others, who know what’s going on, to call him into awareness when he is getting close to the edge of repeat destructive behavior.

[Tweet “Godly forgiveness does not mean or require forgetting.”]

Friend, have you been told you’re wrong for “not forgetting the past?”

Blog Topic: My Husband is Negative. What Can I Do?

Morning friends, I am in sunny California until tomorrow visiting my adorable granddaughters. Thought you’d enjoy seeing how much they’ve grown. When I return, I am sitting in my chair for the next 5 days straight doing nothing but working on my book. Please pray God gives me wisdom and flow for it to come…

Topic: How Do I Live with a Tyrant?

Good morning friends, I’m so excited about the new webinar series that I’ve started. It will begin this Wednesday night, February 15th at 9pm ET, 6pm PT and go for three weeks. This Wednesday I will be talking about Getting Rid of Stinkin’ Thinkin’. February 22nd will be on Managing Negative Emotions and February 29th…