We had our big workshop yesterday on the Three Shifts You Need to Make to Move From Victim Mindset to Owner Mindset. I hope you got to watch it. We had a lot of positive comments and good questions. 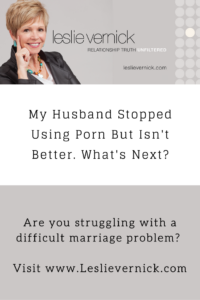 But I wonder if you are zeroing in on his “problems” or “issues” and neglecting your own? Because you are in Conquer, you are familiar with the term #doing your own work. Even spouses of alcoholics (addicts) are encouraged to stop focusing on the addict and do their own work through AL anon.

It's so tempting to focus on the person with an obvious problem, the addict. The one who is clearly dysfunctional. Problematic. Sick. Even if he is technically clean from his acting out addictive behavior you see the remnants of unhealthy relating. But instead of focusing on his dysfunction, what about working on your own growth and healing? By doing so you take your eyes off him, (blaming or excusing) and put your eyes where they belong. On your own work and growth.

That doesn’t mean you never speak into someone’s life. You do (Hebrews 3:13). And when it’s a healthy relationship there is usually appreciation and compromise to make a relationship work for both of you. [Tweet “But if you’re expecting an unhealthy immature person to change in order to make your life work better, then you’ll probably be waiting a long time.”] A better strategy is to take responsibility for your own life and well-being.

For example, if your husband smoked in the house and you asked him to stop smoking and he refused, then what? What are your next best choices? What do you need to do to not be exposed to secondhand smoke if he refuses to change or smoke outside?

If your husband refuses to do his own work to deal with his ADHD, depression, anxiety, and anger, etc., then what do you need to do to not allow his choices to continue to harm you? This is your work to do. Both to accept your husband’s decision and to make your own. For too long women, especially wives, have been counseled to stay passive victims to another person’s unhealthy choices. But I do not believe that is what the Bible teaches or God calls us to do.

For example, in the Old Testament Nabal made a poor choice to not extend hospitality to David and his men, even though this was a common Jewish practice. David was insulted and outraged. Abigail, Nabal’s wife didn’t stay passive. She didn’t try to change him. She accepted her husband for who he was but did not allow his decision to be her decision. She gathered food and provisions for David and his men and courageously went out to meet them. She did not know how David would receive her, or what her husband would do when he found out. But she did what was right, even when her husband did not (1 Samuel 25).

In the New Testament, Jesus tried to have a constructive conversation with the Pharisees many times about their hearts, and the changes they needed to make. Those conversations only enraged the Pharisees, and they wanted Jesus dead. Jesus knew their plan and fled. He didn’t allow their sinful pride and envy to thwart his own ministry and God’s plan (See John 10:39, 11:48-53).

Your husband will still struggle with his own issues. You are clear on this, but let me ask you to think about it a different way. What are your problems with his problems? Are you afraid of him? Are you unsafe? Lonely? Resentful he won’t do any more work on himself? Despondent that you don’t have a partner in your marriage? Understandable. But now you have things you can work on. [Tweet “You can’t fix him, but you can steward yourself and your physical, emotional, mental and spiritual health.”]

Friend, How do you discern the difference between the other person’s problem and your problem?

How Do I Forgive Myself?

Morning friends, I so appreciate you – you’re the best! I have great news! My new book, The Emotionally Destructive Marriage: How to Find Your Voice and Reclaim Your Hope is going to be available a month early on September 17th instead of October 17th. I’m so excited about what this book will offer…

How Do I Get My Church Leaders To Get It?

Morning friend, We’re going to be opening our doors to new CONQUER members on April 12. If you know a woman who has been anxious to get in, please have her join our waitlist and attend our free workshop on April 12, “How Long Do you Keep Trying? And how do you know change is…