What Makes A Person An “Abuser”?

I’m doing a free webinar December 7th on How to Move from Victim Mindset to Owner Mindset. (CLICK HERE to register). In it, you will learn to write a new chapter to your own life story, even if the situation never changes. 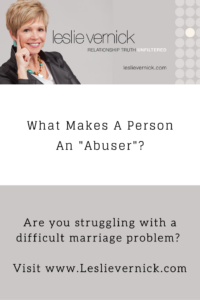 Answer: Let me begin by telling a true story. When my granddaughter was about 2 ½ years old, I was taking care of her and her baby sister. She was very drawn to her daddy’s computer which sat open on his desk. I knew he did not want her playing on it and she knew she was not to climb on his desk chair to pound on the keyboard. Yet when my back was turned, she climbed up on his chair, stood over the keyboard, pounding away.

That wasn’t true. She did know she was not supposed to be up on that chair or playing with the keyboard. But where did she learn to lie and manipulate her Nana with her tears? Who taught her those tactics? No one. Sin comes naturally to all of us. It’s our parents, teachers, friends, religion, culture, and consequences who teach us what is acceptable and what is not. What is good and what is bad. What is right and what is wrong.

Ideally, when that happens, as a child matures those external standards become internalized into that person’s own personal conscience. Later, when that child or adult is tempted to lie, or steal or hurt someone else, those internal controls are operational and help restrict certain kinds of sinful behavior. Why?

1. The person doesn’t want to feel bad about themselves if they violate their own conscience.

2. The person doesn’t want others to think badly of him or her if they behave in those ways.

3. The person doesn’t want to get in trouble or face the consequences if he or she gives in to temptation.

Proverbs teaches us to value wisdom so that we can become our best selves. It also warns us to stay away from temptations that will harm us, ruin our lives, and hurt others. However, Proverbs is also realistic about some people. It doesn’t whitewash evil or cover up for fools. Proverbs says that wise people listen to instruction, but fools and wicked people refuse. (Proverbs 12:15)

[Tweet “Fools don’t learn from their mistakes.”] They blame others instead of taking responsibility or disciplining themselves (Proverbs 12:1). The wicked are described as actually enjoying plotting evil and harming others. Yet they are good at pretense and image management (Proverbs 2:12-15).

But your question is how do the wicked become wicked? Or foolish become foolish? Or abusers become abusers. Is it generational? Genetic? Learned? Here are a few of my thoughts.

Science now tells us that the brains of narcissists and psychopaths are different from the brains of those who don’t have this problem. But we still don’t know why. Are these differences because of biology, or due to repeatedly making poor choices?

Therefore, when we look at the brain structure of a narcissist or sociopath that is different from someone who does not have these problems, we have to ask ourselves, are these differences because they were born that way, or has their brain changed in response to their chronic life choices and “thinking habits?”

Their very character becomes deformed growing further and further away from the image and character God intended them to have. As C.S. Lewis wrote in The Great Divorce that “the one who repeatedly grumbles becomes nothing but a grumble.” That’s who he is, not just what he does.

We don't have a clear answer from science yet. But what we do know from science is that in addition to our own personal choices for good or bad, when someone experiences trauma, neglect, abuse in childhood, there are consequences in the brain. In other words, we know that trauma impacts the brain not only for the one traumatized but for that person’s children even if they didn’t experience that trauma or are yet unborn.

However, it’s important to also note that not everyone who experiences abuse, neglect, or trauma develops a personality disorder or becomes a sociopath or an abuser as a result of that trauma. We must ask ourselves what else is at work?

Our heart. [Tweet “Even after something traumatic happens to us, we have choices to make about what we will do with what happens to us.”] Will we hate or forgive? Will we curl up in fear? Retaliate or trust God? These particular decisions repeatedly made over our lifespan, create not only the particular neural pathways in our brain but our character traits of good and evil.

Again C.S. Lewis writes….”Every time you make a choice you are turning the central part of you, the part of you that chooses, into something a little different than it was before. And taking your life as a whole, with all your innumerable choices, all your life long you are slowly turning this central thing either into a heavenly creature or into a hellish creature.”

For example, a quiet timid personality might engage in much more covert tactics to get his way than a more aggressive personality. Someone who grew up in a home with little teaching about morality or honesty might learn to lie or sneak or cheat much more than someone who grew up differently. However, each of us has an internal God-given moral compass, that knows right from wrong, love from hate, evil from good, even those who repeatedly choose to ignore it.

Morning friends, I’m sitting again on the deck of the ship in the South of France.  I’ve never been here before but it is just beautiful. In the harbor there are yachts that look like mansions, the lifestyles of the rich and famous. But for a moment, it’s fun to get a glimpse of it….

If I Leave It Will Only Get Worse

Morning friends, I am so thankful for this community. I hope I get to meet you all at our CONQUER CONFERENCE in October. For a sneak peek at the speakers who will be there, I will be doing five FB Lives next week, one each day. Each day I will be chatting with you and…