How Do I Speak Up To My Trial Lawyer Husband?

Morning friend, Do you have a hard time asking for what you want or need from your friends? Children? Husband? Doctor? Neighbor? Pastor? Counselor or coach? I’d love to hear from you the reasons you think it’s hard for you to be direct and say what you want or need. Granted you may not always get what you ask for, but sometimes we never ask. Why is that for you? 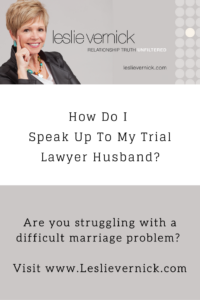 Today's Question: My husband is a verbal abuser. He was a trial lawyer. He is brilliant and articulate. He changes his assaults from time to time, particularly when one is not successful, but he has certain mantras that are repeated. The current one is: “I don’t understand you. You are not making any sense. YOU ARE NOT COMMUNICATING!” This is said after he has cut me off mid-sentence, not listened to what I said, and by cutting me off, has denied me a chance to talk. How should I respond? I would like some actual words to remember and say back. How do I nip this in the bud?

Another one is: “I CAN’T HEAR YOU!! You are not facing me while you talk.” Of course, he often tries to talk to me when he’s in a different room or when he’s not facing me, but if I do so it is a major offense. So strange. I always respond by calmly moving and repeating what I said. Any other possible responses?

This is all part of his current attack to paint me as a bad communicator.

I am a perfectly fine communicator. But I expect normal communication, not those with ulterior motives. Normal communication has a desire on both parts to understand each other. This person, at least unconsciously, does not want me to be able to communicate. How should I respond?

Answer:  Interpersonal communication involves both talking and listening for both spouses. From what you describe, it does not sound like your husband wants to do any listening, just talking at you. That’s not communication. That’s bullying, ordering, blabbering, lecturing, scolding, preaching, teaching, and pontificating.

[Tweet “Interpersonal communication involves both talking and listening for both spouses.”]

But for a moment, let’s give him the benefit of the doubt. Next time when he says, “I don’t understand you,” I’d like you to try an experiment. Try to see his statement as his valid experience. From what you say, you assume when he says those words, he’s using it as a diversionary tactic to get you to overexplain or try again, where he can once again discredit your ability to communicate because he still does not understand.

I’d like you to press pause on that thought and for this experiment, instead be curious. For example, you could simply say, “What don’t you understand?” See if he can tell you. Maybe you discover he understands what you said but doesn’t understand why you don’t agree with him. Or maybe you’ll see he misunderstood something in what you said and you can clarify. If that happens, is that a different outcome for both of you?

Another approach could be instead of reexplaining what you just said, ask him to tell you what you just said as best he understands it. That way, you will be able to better know whether he listened to anything you said. If not, perhaps your thoughts are correct, he’s simply attacking you from another angle.

You’ve asked what you could say in these moments and I’ve given you two approaches. But I wonder have you been direct in sharing your experience with him and asking him for what you want/need?

Or, “I’d like to be talked to as a person you value and respect.” Or “I’d like for you to stop interrupting me and cutting me off and listen to what I have to say.” Or, “I need to feel safe when you ask me questions and I often feel like I’m on trial. That doesn’t work for me.”

Hear me, none of these approaches will work with a person who is bent on damaging your reputation and your sense of confidence and worth. But doing so will help you value yourself, stand up for yourself and gain confidence in your abilities to hold your own, which changes the dance of your relationship as well as your own internal sense of self. That is a game-changer for you, even if he doesn’t change or respond positively. And, if he escalates his verbal assaults and tactics, that clarifies things and gives you more wisdom on what your next steps might need to be.

Jesus was an excellent communicator but he did not always have good outcomes. At times he spoke his truth, other times he kept his mouth shut knowing that speaking would yield no good results. Sometimes I think we tell ourselves if only we said it the right way, then the other person would change. He’d wake up. He’d finally see the light. And that is a possible outcome when we stop reacting in our own negativity and learn to speak the truth in love. However, it’s not a guaranteed outcome.

I’ve said it before, but I’d encourage you to do your work. Learn to speak the truth about what it’s like for you to talk with him, telling him what you need or want to make this a better conversation for you.

But remember, don’t do it to change him. Do it for you. In doing so, you will start to transform your internal experience of being with him from something that feels like a continual assault, to something that feels like you have done well and are proud of your side of the street even if things in the marriage don’t change. His attempts to rob you of your confidence, courage, and value will fall flat because you are no longer giving him any power to do so or needing him to give it to you for you to be healthy.

Friend, When did you begin to realize that despite living with an immature, unhealthy person, you had your own work to do to get healthy and strong?

How do I talk with my husband when he’s always right?

Hi Friends, I know, I know, I haven’t posted my Alaska pictures yet. Some of you have gone to see them and have been disappointed. I’m sorry. I am not computer savvy yet and I confess – I don’t remember how to do it. My secretary was swamped with other things and so I couldn’t…

I am so excited to announce the launch of my brand new podcast, “Relationship Truth: Unfiltered!” And I want YOU to be among its first listeners.  If you know me you know this isn’t the same “how to have a happy marriage” stuff you’ve heard so many times before. This is real, biblical advice you…