Morning friend, I will be speaking at the Lighthouse Christian Church on October 23rd. If you’re local, come join me. I’d love to meet you. We’re talking about recognizing healthy and toxic relationships and how to heal from destructive ones. 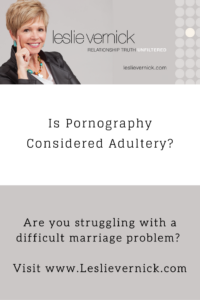 My husband and I reached out to a couple that are leaders at our church for godly help. They stated that they do not believe that viewing pornography is biblical grounds for divorce because a physical person is not involved. The couple quoted the scripture Matthew 5:28. Can you provide some insight?

I’m so sorry your church has not taken a strong stand considering the well-documented damage pornography has on a person’s mind, sexual abilities, as well as intimate relationships.

Jesus says, don’t mess around. He tells people to take decisive action if they have this problem. Gouging out your eye or cutting off your hand will not keep you from lusting, but what Jesus meant was, DO what it takes to deal with this problem NOW. Sadly, many men don't listen, and even more sad is Christian people helpers don’t confront it seriously.

[Tweet “People believe the lie that they can play with fire and won’t get burned.”] But they’re wrong. The Bible is full of warnings about sexual immorality and the consequences of unbridled lust.

For example, Paul writes, “there should be no sexual immorality among us and that such sins have no place among God’s people.” He goes on to say that “we should not be fooled by those who try to excuse these sins, for the anger of God will fall on all who disobey him.” And later he tells us to “expose the worthless deeds of evil and darkness.” (See Ephesians 5)

Does he hate it? Is he repentant? Is he doing everything within his power to stop and eliminate this habit, this sin, this pleasure, even when it costs him? For example, is he willing to be without Internet access? Is he willing to put controls on his computer? Is he going for help with his thought life? Is he honest and open with you and others about his struggle? Is he willing to be held accountable? And, is he grateful for a wife who holds him accountable for his behaviors so that he doesn’t burn himself and his entire family down to the ground with his own foolish fantasies or actions?

If so, then your initial response would be gracious and forgiving, coupled with an uncompromising stance against allowing such evil in your home and marriage. No woman in her right mind, Christian or otherwise, would allow her husband to bring another woman into their home to have sex.

In the same way, if your husband is not repentant or desiring and willing to change, you should not turn the other way, or close your eyes to your husband ogling other women or watching pornography. It degrades you, diminishes him, and demeans the women he ogles.

This is a tough stance, but Jesus and Scripture call us to take a tough stance. If your husband or church won’t, you must. If you don’t your husband will continue to behave as if he can have his cake and eat it too. He can enjoy all the perks of home, marriage, and even family but still live treacherously and lustfully. You can choose. Don’t let him.

Remember, this is not just his life it’s your life and your children’s lives. Your strong stand may be the one thing that will get his attention and hopefully motivate him to face his issue. If he refuses, then it’s time you quit enabling his habit to destroy you and your children.

Friend, when have you had to take a strong stand on this issue? Has your church supported you or enabled him?

Hi Sweet Friends, This weekend I had the awesome privilege of speaking at Emmanuel Baptist Church in Johnstown, PA not only for their women’s event but also for their Saturday evening and three Sunday services. God truly was present and it doesn’t get any better than being a vessel that He uses to help people…

Morning friends, I’ve relocated to our summer cabin. Since all my May speaking/travel schedule has been postponed until Fall, there was no reason not to move up to the mountains now. Phoenix heat has been near or at 100 degrees over the last ten days. It’s wonderful to enjoy 80 degrees, sunny, dry, beautiful days….

Getting Healthy After Divorce

Morning friends, Oswald Chambers tells us, “The great enemy of the life of faith is the good that is not good enough.” How about you? Do good things clutter out the best things in your life? Sometimes busyness masquerades as godliness. Don’t let it fool you. Busyness is just busyness. Godliness takes time to slow…