He Said I Should Be Happy He Came Home To Me

So glad that you chimed in on not seeing some of your responses on the blog posts. We’re checking into that on our technical side so hopefully all will be running well. In the future if you have questions on issues related to the tech side of things, please reach out for help using our contact form here. 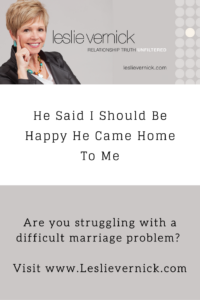 Answer: Aren’t you the lucky one. He chose you instead of his mistress…. and that means you should be grateful. You should not feel hurt or angry that he’s lied and cheated on you. Just forgive and forget. Get over it and quickly he tells you.

Here’s a reality check. He’s the one who broke his wedding vows. Broke your trust. Cheated on you with another woman and now he thinks you should be grateful because he chose you? Hello? My question for you is DO YOU STILL WANT TO CHOOSE HIM? He doesn’t get to make that decision right now. You do.

Adultery is one of the clear biblical grounds for divorce. Listen carefully to what he’s telling you. [Tweet ““I cheated. I lied. I broke your heart, destroyed our trust but since I came home to you, you need to forget about all of that.””] Is that true? No.

He shows no repentance. And since he wants to move forward and work on your marriage, what exactly does that mean? It means that he will blame you for his cheating. That something was wrong with your marriage (or by implication you) so he had no other option but to cheat.

But that’s not true. [Tweet “Adultery is not a marriage problem – it’s a character issue that causes marriage problems – broken trust.”] There are plenty of unhappily married folks who do not cheat on their partner. Why not? Because they do not want to be a cheater and a liar. Your husband did something damaging to you and to your marriage but he refuses to look at what he did. He doesn’t want to let you talk about it or be a witness to the impact and pain it caused you. Why not? This is his work to do, not marriage work.

You cannot rebuild broken trust with someone who is unrepentant and unwilling to do the hard work to understand why he felt entitled or justified to cheat in the first place. Granted he may have been unhappy or troubled about some things, but he chose to cheat. He could have gone to counseling. Talked with you. Gone to the pastor. Done lots of other things. His unhappiness did not make him cheat. If you don’t hold firm and he doesn’t do his work, you will be seeing a repeat of this pattern again and again and again. Is that what you want your marriage to look like? Him being free to cheat when he feels like it and you being obligated and grateful that he comes home?

I hope not. And if you’re tempted to give in to his nonsense, then you have your own work to do. For example, Are you afraid to be alone? Are you not capable of supporting yourself financially? Have you put your entire well-being in your marriage and it scares you to let that go? Are you afraid God will be angry with you don’t go along with your husband and say, “No this is too serious to ignore?”

An affair is betrayal at its worst. You will have your own healing work to do around that. He has his own work of honest self-examination and self-reflection to understand and repent of what he has done. Next, he will need to care about the impact he has caused you and work to rebuild broken trust. If he is not willing to engage in any of this work, please do not expect him to be a faithful or honest man in the future.

This is tough truth, but strong medicine is meant to help not to harm. You asked this question because I think you already know the right path to take, but you need support. We’re here for you.

Friend, do you ever feel gaslighted by the nonsense of what your destructive husband says are your next steps forward? How do you get clear on what’s true?

Does God Care More About Sex Than Marriage?

Good morning friends, Thank you for all your comments and notes encouraging me to continue writing this blog. I want to serve you and meet your needs and so I appreciate the feedback. I was in Dallas, TX all weekend speaking at the Wonderful Counselor Conference, so what I thought I’d do is share with…

Are You Willing To Suffer In An Abusive Relationship?

Morning friend, Thanks for being here and part of our community. We need one another. Women all over the world are being abused and mistreated and sadly many churches continue to misadvise women on how to respond. If you need more connection and community with other like-minded women, CONQUER, my educational and support group is…

How Hard Do I Push My Husband For Change?

Happy Wednesday friends, At least I hope it’s happy for you. But if it’s not, can you embrace your pain without adding more suffering?  You see, many of us run from pain, avoid it like the plague.  And because we refuse to accept pain as a normal part of being a broken human being living…