Thanks so much for your prayers for my family and me. It was a long, hard 3 weeks of dying but my mother is with Jesus now and that is what she wanted. My dad misses her and it will take him time to create a new normal, so if you think of me, pray for him also. I’m home now yet tired. Loving well is hard work. 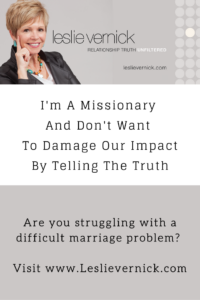 Today’s Question: I’m a missionary with my husband (and our kids). While he has had negative patterns of communication, maybe abusive/controlling patterns (still discerning how serious), and workaholism since we were dating, I only started being honest with myself about it all within the last few years.

I’ve contributed to enabling him, being afraid to stand up to him, etc., for forever. I also prayed for years for God to convict him and change him. I am now starting to work on me, and I know that’s an important step. I think part of my issue is that we live on a metaphorical pedestal in a metaphorical fishbowl, and I have been terrified of ‘ruining kingdom work’ b/c of sooooo many stakeholders in what we do here, so many people watching us.

We have witnessed other families fall apart in ministry for various reasons and have seen the devastation that can cause. I also do not have viable access to counseling, so I’ve been figuring out all of this on my own through prayer/journaling and reading and watching programs like yours! (Thank you!). As I’ve begun to work on me, detach in healthy ways from his moodiness, and let go of him into God’s hands.

I don’t have a lot of romantic, sexual or other feelings towards him…. Like in letting go of the eternal hope to fix or change him, I’ve discovered maybe there wasn’t much more solid underneath… and I’m not sure that I feel motivated to rebuild. And I’ve been attracted to other men for the first time since being married (21 years), though I am trying hard not to act on any of that. But it does scare me (and humble me) to think that in the end, it could be ME that destroys our marriage!

So, I know I need to keep fighting for my marriage, have some hard conversations with him about how he’s affected me, keep myself from sinning (guard my heart!!).

But, how do I learn to love and feel affection for him again? Is it possible to ‘fall in love’ again at this point? Even if he works to rebuild trust, I’m not sure I want to let him. Is that horrible? Is the right thing to keep working at this if he’s willing (finally) to change? I guess I just really feel stuck and regretting my choice to marry him, and am not sure that I am capable of sticking it out, (and that seems like such a negative way to look at it or to live) even though I know there would be huge implications for our ministry, our kids, and life in general.

How do I find the energy, courage, etc. to keep doing the work, keep motivated, and stay focused on fighting for the best outcome when my heart isn’t in it anymore????

Answer: Thank you for your courage in reaching out and your honest vulnerability. Even though you are a missionary and on a very public platform, you are still a human being with needs, feelings, strengths, and weaknesses. [Tweet “You are waking up to some very tough truths both about your marriage and yourself and it’s tempting to simply close your eyes and go back to pretending and trying harder.”] But I’m going to recommend you keep doing the hard work of healthy growth.

It’s very tempting to stay stuck in regret over marrying him in the first place, but please stop. Give up the “should of, could of,” refrain of regret. The truth is you didn’t know what you didn’t know about him or about yourself. Now you know. He’s got some unhealthy patterns in his life that impact you and your relationship. You also now know that you’ve had some unhealthy patterns yourself. You’ve enabled him to some degree. Maybe out of fear or duty or wrong teaching. But you’re waking up. You’re growing and changing and feeling new feelings and that scares you too.

In addition to letting go of your regret, I’d also encourage you to let go of what you think the future outcome will be as you change. [Tweet “You are scaring yourself from your next right steps forward by creating all kinds of stories about what might happen.”] Stories with outcomes you don’t like. But the truth is: you don’t actually know what’s going to happen when you do the next right thing.

For example, when Queen Esther did the next right thing and went uninvited into the King's presence, she didn’t know if she would live or die. When Abagail went against her husband’s orders and prepared food for David and his men who were heading to kill her entire household, she had no idea what David’s reaction would be. When Moses’ mother placed her baby in the river where Pharaoh’s daughter would be bathing, she didn’t know whether her baby would live or die. When Ruth chose to accompany her mother-in-law back to Bethlehem, she would not have imagined she would meet and marry Boaz and be in the lineage of the Messiah. We think we know what’s going to happen, but we actually don’t know the outcome. But God knows. Can you trust him?

You know you need God’s wisdom and God’s help as you tell the truth first to your husband and then to those who oversee your ministry. You both need some counseling and your board should provide the funds for you both to get competent help. I would not recommend marital counseling because right now both of you need to figure out what you truly want and the support to get there so that means individual counseling. For you, restoring your marriage feels overwhelming so I’d encourage you to continue to work on you. If your husband does his own work to change and grow, that may give you some encouragement. And if he chooses not to, that clarifies things for you and your board overseeing the “ministry”.

I’d love to invite you to join CONQUER. CONQUER is an online educational and support group for Christian women in destructive marriages that I’ve run for ten years now. We’ve had missionaries and pastor’s wives in our community. It is safe and supportive. We will be opening our doors on September 30th and I invite you to join this amazing group for your continued growth and support. There are scholarships available. https://leslievernick.com/conquersignup

Friend, what words of support and wisdom can you give this woman to help her let go of her past regrets and future outcomes so she can take her next right step forward?

When Is Marital Counseling Not A Good Idea?

Morning friend, I’m heading out to the American Association of Christian Counselors conference in Orlando. I’d appreciate your prayers as I travel and speak. I’m feeling a little worn out from the last month and need some extra prayers to stay healthy and strong.  Today’s question: My pastor keeps pressuring me to try marriage counseling…