A Courageous Woman Refused To Submit

Prayers appreciated for my family. My step-mom is in the final days or weeks of her life and it’s been hard. Pray that she is taken home to heaven with a minimal of suffering and discomfort and comfort for my father who will deeply miss her.

Instead of our normal question and answer format, today in light of recent news stories, I wanted to talk about a woman who is rarely mentioned in a positive light in the Bible. Only one chapter is devoted to her story and then she is forgotten. Yet she set an example for woman today to emulate in light of rampant sexual harassment, misogyny, and the objectification of females. 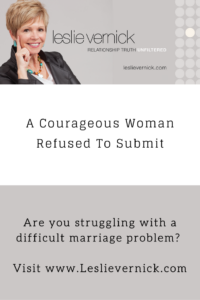 “On the seventh day of the feast, when King Xerxes was in high spirits because of the wine, he told the seven eunuchs who attended him…..to bring Queen Vashti to him with the royal crown on her head. He wanted the nobles and all the other men to gaze on her beauty, for she was a very beautiful woman. But when they conveyed the king’s order to Queen Vashti, she refused to come.” Esther 1:10-12 NLT

From a young age, many women are trained to give, to go along, to accommodate, and to not hurt anyone’s feelings. “Be nice,” we’re told, “Or people won’t like you”. We’ve learned to please, to placate, and to pretend so as not to make waves. To keep the peace. To be loved and accepted.

Before marriage and after, I was told to obey authority and to submit to my husband, even if his requests seemed to me foolish or unreasonable. Passivity and dependence seemed to be the Biblical definition of a gentle and quiet (feminine) spirit.

Yet the Scriptures reveal many women who were strong and stood firm. They didn’t always obey or submit. Like the Hebrew midwives, they disobeyed the authority, and like Abigail, who didn’t submit to her husband’s foolishness.

One of my favorite unsung heroes is Queen Vashti. (Has anyone ever heard of her spoken of in a positive way in Sunday School or from the pulpit?) She refused to allow herself to be treated as a sexual object for her husband’s friends to ogle.

In a culture where females were often devalued and disrespected, Queen Vashti said no to her husband’s drunken demand. She refused to be objectified or submit to his orders. As a result, she lost her position as Queen but she preserved her integrity and she set an example for other women to follow.

There are many other Biblical examples where God empowered women to stand up for themselves, for others, and for what was right.

How about you? Are you a pretender, a peacekeeper, or a courageous warrior? [Tweet “Ask God to give you the courage to stand up and say “No”. It may cost you, but what does it cost you to stay passive and accommodating?”]

Where have you been too nice, too accommodating, or too passive? What has it cost you?

I’d like to invite you to attend my free webinar August 19th Four Lies that Christian women believe that keep them scared and stuck in their destructive marriage. https://leslievernick.com/joinwebinar

How Do I Heal From His Awful Words And Behavior?

Morning friend, So glad you are here. I’ve been watching comments on the feed and I hope you are all seeing your comments. If you’re still experiencing a problem posting or seeing your comments, please let me know. Question: How do I overcome some of the awful and disrespectful things that my husband has said…

Is It Controlling to Ask Someone to Stop Hurtful Behavior?

Morning friends, I hope you have been watching the new videos I’ve been posting each week on my home page. Are there any thoughts? Please leave your comments or questions on the YouTube response form. We’d love to hear whether they’re helpful and what topics you’d like to see me…