I just returned from a great women’s retreat “He Makes All Things New” with Called to Peace Ministries. It was wonderful to meet some of you in person and be able to give you a real hug. I’m a little worn out after speaking 7 times and doing two interviews so for this week’s blog I answer a question that I’ve been asked a lot, but it’s a past blog post I wrote for Christian counselors. You might want to forward it to your pastor or counselor so they stop telling you to forget the past. 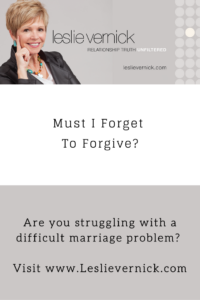 Why We Must Never Forget Even When We Do Forgive

Working for over 30 years with couples attempting to recover from serious marital sin, I have often heard one of them say, “Why can’t you just forgive and forget?” or “You’re holding onto the past. Can’t we start with a clean slate?” or, “God says love keeps no record of wrongs.” or “That we’re to forget the former things. Each day is a fresh start.”

Christian counselors are also guilty of using these same phrases with their clients, usually when the one who has been sinned against feels stuck and is unable or unwilling to be silenced and continues to bring up past offenses or hurts in the counseling session.

[Tweet “There is a time for putting the past in the past, but doing so doesn’t mean forgetting the past, it means healing from it.”] We must never forget the past because…

1. The past is instructive. The past reminds both sinner and sinned against that sin is always painful and destructive to someone. Remembering helps both of them stay aware that they never want to return to where they’ve been. It also keeps them stay vigilant so they won’t slide back into the old habit patterns that created the problem in the first place.

Tom, one of my clients, reminds himself every day that he is an alcoholic. To forget would mean disaster. One wrong decision could wreak havoc on his entire present life that he has worked so hard to rebuild. He attends weekly AA meetings and joined a men’s discipleship group where he remembers what it was like to be lost, drunk, hopeless and helpless and what it feels like to be rescued by Christ. He never wants to go back to his old life. Remembering he’s an alcoholic as well as a new creation in Christ, helps him know what to do when the lure for just one drink sings her deceitful song.

2. The past is often still the present. John swears he’ll never hit Sally again and feels insulted that she won’t let go of her “irrational fear”. He wants her to reconcile and trust him again. It’s true that John has not hit Sally for over eight months. But John continues to demonstrate attitudes and actions that are rude, selfish, and inconsiderate. He is consistently unable to empathize with Sally’s feelings and unwilling to hear her “no”.

John has not allowed his past to instruct him (about himself) but Sally has learned something from it. John may have learned not to hit her again (due to his fear of legal consequences), but Sally knows John’s heart has not changed. He continues to minimize his offenses, refuses to follow the counselor’s treatment plan, and is still ruled by his own desires rather than by Christ. Sally can’t and shouldn’t forget the past because if she chooses to stay with John (or is told by her counselor she must), their past as a couple will continue to be her present reality.

3. Forgetting the past could put you and others in continued danger. We have all heard and read about stories of gross negligence, injustice, and oppression when church leaders have covered up for the abuser and villainized the accuser. This misapplication of grace enables the abuser to continue his abuse and harm. When we tell victims to forget the past, we put them in greater danger.

Sin always, always, always has negative consequences. Sometimes the consequences are short-term but other times they are permanent. If someone molested one of your children, no matter how much he or she repented, I hope you would never allow him or her unsupervised contact with any of your children or anyone else’s children. You may forgive him or her, but you must never forget. That would be irresponsible, foolish, and potentially dangerous.

When we encourage someone to forget, we are asking him or her to do the impossible. God gave us our memory for a good reason. [Tweet “Proverbs reminds us that to put our trust in an unreliable person is like walking on a broken foot or chewing with a broken tooth.”] In other words, not smart.

Remembering keeps us wise, so we don’t become repeat victims or continue to put others or ourselves in harm’s way.

As a Christian counselor or pastor, when a person guilty of a terrible or repetitive sin keeps pressuring his spouse to forgive and forget, pay attention. They are doing so because they are unwilling to do the hard work to learn from their mistakes. They are unwilling to be empathetic to the pain they’ve caused. Rather, he wants to be free from the pain he feels and put it all behind him. In addition, he is unwilling to be held accountable by his spouse and wise others who know what’s going on, to call him into awareness when he is getting close to the edge of repeat destructive behavior.

[Tweet “Biblical forgiveness does not mean or require forgetting.”]

Friend, Have you been told to forgive and forget in the past by someone or believed that’s what God required?

If My Spouse Kills Himself, Will It Be My Fault?

Morning friends, I love you all. I love your heart. I love how you spend so much of your precious time helping one another, sharing your stories, resources and heart with one another. I love that you are humble and confess when you have reacted emotionally or harshly and want to learn to walk in…

Am I Wrong for Not Wanting Reconciliation?

Morning friend,  I had a wonderful time in Istanbul and Greece on my cruise. It was two years of waiting, but worth it. I especially enjoyed seeing Ephesus and Mars Hill, where the apostle Paul was, and visiting the place he preached in Acts 16. It’s hard to get back on track, especially with the…