My New Marriage Is Abusive. Now What?

I'm heading to the Called To Peace retreat in Asheville, NC this weekend. It's going to be a wonderful weekend of healing, rest and restoration for women. I'm so excited to be their speaker and I ask for your prayers. I'll be speaking 7 different times, some on panels, but I will need prayer for my stamina, strength and spirit to be strong and clear. If you're there, please come up to me and say hi. I'm open for hugs. I've been vaccinated. 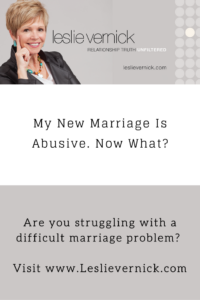 Today’s question: I’ve been married a very short time, since December 2020. It’s been a rough transition for me, going from the single girl to married with a stepdaughter. And then two weeks into our marriage, finding out I’m pregnant. We’ve been up and down and all around. In an effort to be well, I’ve sought biblical counseling.

It was revealed to me that my husband probably has narcissist personality disorder. Which explains all the emotional and psychological abuse I’ve been experiencing. He begged me to kick him out so he could move back home to his parents. To the point where I believe he was picking fights with me to get me to do it. Eventually he left. We started counseling but he hung up on us in our 3rd session. That counselor also citing a personality disorder.

Now, he wants to move back. He believes we can put our issues in the past and “just move forward”. He doesn’t want to do counseling. Won’t get help for substance abuse, saying he can control things. All while it’s been so volatile (from him) in our separation. He says we can’t work on our marriage separated. I get torn because he’s pretty convincing and I want my marriage to work but as healthy people. How can I stay empowered to stick to my boundaries while honoring him as my husband?

Answer:  I’m sorry that you have had such a painful awakening so early into your marriage. But most women on this blog would tell you that destructive behaviors and entitled thinking show up soon after the honeymoon and become patterns long term. He has a daughter from a previous relationship. You say, he’s up and down and all around. What does your stepdaughter’s mother say about their previous patterns in their relationship? I would guess, they were the same, although he probably paints himself as the victim.

Your dilemma is that you’re tempted to fall for his charming love-bombing right now. You're pregnant, scared, hurt, and want your new marriage to work. But let’s continue to look at the facts.

You said he begged you to kick him out so he could get his parents to take care of him. Now he’s ignoring his hurtful behavior toward you and asking you to ignore it too. He wants you to move forward, close your eyes, don’t ask questions, don’t seek repentance. Just move forward. Now he’s different. He abuses substances (you don’t mention what) but now he can control himself?

Really? [Tweet “If he could control himself why didn’t he do it before?”] What’s different now?

Here’s the truth. We don’t just move forward from wrong thinking, bad behavior, selfish motives and addictive behaviors. We need help and support, which he refuses. We also need to admit our wrongs and develop a specific plan so that we don’t fall into our previous habit patterns. He refuses to go to counseling. Instead he wants you to believe that he’s not that bad and he doesn’t need help. He believes that but don’t you fall for it. Your new husband has some serious problems and without long term consistent accountability and help, he will not change.

However, you mentioned that a previous counselor diagnosed him as a narcissistic. If that is true, it’s very typical of that type of personality disorder to believe they are above the rules of life or the law and don’t see any reason to change. They’re more special and therefore more right than anyone else. With that mindset, it’s highly unlikely he will change. Not because it’s impossible, but because he doesn’t believe it’s necessary. It’s everyone else’s fault and problem.

Honoring him as your husband doesn’t mean falling for his lies or enabling his destructive thinking and actions to continue without consequence. If we think of the children’s fable “The Emperor’s New Clothes”, was it more honoring to lie to him about his nakedness than to tell him the truth? You can honor your husband by speaking the truth in love, with respect and kindness, along with strength and good boundaries. Here’s a sample of what that might look like.

“I know you want to just move forward, but I don’t believe that ignoring the past we’ve had together will result in changes in our future. My goal is to be as healthy as I can so that I can be the mother and wife God calls me to be and the person I can be proud of. I can’t pretend that what we went through was no big deal. It was a big deal for me and for me to move forward with you I need time and accountability with a 3rd party counselor to rebuild broken trust and safety. I don’t feel emotionally safe with you and I don’t want to live with someone who is unwilling to face the hard things and work on them. I’m going to get the help I need to stay strong and get healthy. You’ve clearly said you won’t go for help, so where does that leave us?”

[Tweet “You can be both honoring and respectful holding onto your boundaries of what you will do and won’t do, and what you can live with and won’t live with.”] It’s not just about you anymore. You also want to be healthy and a good example for this new baby. Staying strong and firm with your boundaries is the only way forward if you don’t’ want to repeat the past. I know it’s hard when he’s love-bombing you with promises, but you’ve been there before, and it didn’t end well. Don’t do it again.

Friend, how were you able to not succumb to the love bombing and empty promises of the abuser and stay firm yet respectful with your boundaries?

Morning friends, Hope you had a great weekend. I got a bad cold but had a great speaking event at the Casablanca Bridal Shop in Newport Beach, California. The sponsoring organization, Celebrate Forever, seeks to educate couples on what makes relationships work, and equip them with the tools and skills to transform bad relational habits…

Morning friends, This week I’m traveling to Toronto, Canada for some meetings. It’s so beautiful here. I wish I could stay longer. I’ve loved Vancouver, BC when I vacationed there a few years ago. But I’ve never been to Montreal or Quebec, which are on my bucket list. I know we have a few Canadian…