Despair, A Time For Change

I just read the most amazing book you all have to check out. It’s called The Making of Biblical Womanhood by Beth Allison Barr. She is a pastor’s wife as well as a Ph.D. History professor on women. She tells a riveting story of Christian women teaching and preaching throughout the church history as well as more recently. She says that the movement to define Biblical Womanhood by John Piper and Wayne Grudem is not biblically or historically accurate or representative of the heart of God for or towards the role of women in the church. I learned so much from this book and appreciate the author’s courage in speaking out on what history tells us but has been forgotten or erased in our modern church teaching on women’s role. 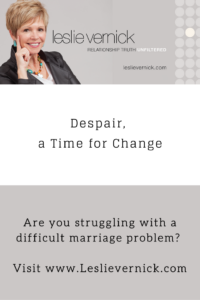 Today’s Question: I've been married over 30 years and our relationship is becoming increasingly toxic. My husband and I fight frequently about everything, from our adult children to finances. My husband is a Christian with many good qualities and is never physically abusive, but our relationship has become destructive because we cannot communicate.

There are two predominant patterns: when we argue, he will go silent, sometimes for days. I almost always break the ice by trying to initiate a new conversation but even then at the risk of another blowup. He occasionally apologizes, but rarely with any real sense of sorrow.

The other pattern is that when I bring up a concern about something he has done – or not done – (I'm careful to use “I” messages and speak calmly), he becomes extremely defensive, gets loud and turns the tables – attacking me as a person (accusing me of being selfish, immature, negative, miserable, a chronic complainer and on and on). In other words, if I raise a concern about his actions, he attacks me as a person.

Also, another thing happens. When I confess something about myself that I'm not proud of (for example, being jealous of a friend), he quotes Bible verses to me and then uses my confession against me in future arguments. As a result, I'm not inclined to share much anymore.

His most recent outburst/accusations were withering, and I'm so depressed I've spent much of the last two days in bed. (I've had ongoing struggles with depression/anxiety and much of it is related to my marriage), https://www.cdhfinechemical.com/cdh_data/xanax-alprazolam/. I don't want to leave, but I'm not sure how much longer I can handle the fighting and the personal attacks. When we're not arguing, he's a very jovial person, but we're never far away from the next fight. I'm walking on eggshells, and always wondering what mental notes/criticisms he is making about me for use in the next argument. Please help! Thank you.

You say that your relationship is destructive because you cannot communicate. I don’t agree with this diagnosis.

The reason I ask these questions is that you’ve been married over 30 years. If your marriage felt happy, loving and safe for a long while and then began sliding downhill, we have to look for what’s going on. Sexual addiction might be one thing. A hidden affair might be another or possibly built up resentment. A brain problem or chemical disorder could be impacting his mood or thoughts. Or even a mental health issue like depression https://www.pharmacybc.com/ For depressed men, anger and shame are often present where, before getting depressed, they were not issues.

[Tweet “On the other hand, maybe he’s always been that way and what has changed is you.”] You’ve grown tired of dancing around his moods and catering to his emotional temperature. You’re tired of being the “good submissive” wife and losing your voice or choice in family decisions. You’re tired of being beaten down and silenced and you’re waking up to the amount of control your husband exercises over you. And your change is creating more conflict and stress than when you just stayed silent and gave in. This often happens when a woman begins to wake up to the destruction in her marriage. But now what?

You mentioned that you’re struggling with anxiety and depression. That’s not uncommon. In fact, one of the reasons I started this ministry was when I was writing my book Defeating Depression. So many of the depressed woman I counseled were tired of constantly walking on eggshells. Tired of crushing themselves to save their marriage. Tired of living the script others had written for their lives, but not at all the story they wanted. Tired of believing that God cared more about their marriage of their spouse than their own safety and sanity.

Friend, even if he won’t go for help around your marriage, help me understand why you haven’t gone for some help for yourself? I think this is the best place where you need to start making a change. A husband’s destructive attitudes and behaviors are often not a marriage problem. They cause marriage problems for sure, but they are individual heart issues.

Your marriage is in trouble, but so are you. You’re spending a ton of energy trying to get your husband to “see”, to hear you, and to change. It’s not working. It’s time to redirect. For now, you are going to have to focus on you so that you get stronger. What changes do you need to make in order to get yourself healthy mentally, physically, emotionally and spiritually?

Here is where many women get and stay stuck. They believe they NEED their spouse to change in order for them to be okay. And therefore, they try in every which way to get him to see it. To get help. To stop it. To change. And when that doesn't happen, they start to go downhill into a pit of despair.

I wish I could give you the magic words to say that would wake your husband up to his destructive behavior but the words that you’ve already tried are the ones that have the best shot. “I” statements. Non-shaming language. You’ve done that. Even Jesus couldn’t get through to certain individuals. Like Judas, like the rich young ruler, Jesus let them go.

You might not be able to influence your husband to change, but what do you need to change in order for you to be okay and not be stuck in bed overwhelmed with depression? It might mean you need to separate to get some clarity, safety and space to heal, as you are not staying well. But even if you do get away, it also might mean that you need to work on you for a season to get stronger so that his cruel words do not suck the very life out of you. You are a precious daughter of God. [Tweet “Don’t let your husband be an identity thief and rob you of who you are.”]

So let’s go back to your next step. If your marriage used to be happy and safe, then I would confront him on the changes that are occurring in him that are threatening to break apart your relationship. Is he having an affair? Does he have a secret life you don’t know about? Are there resentments he’s not talked about but stuffed and stuffed and stuffed? Does he have something medical going on?

On the other hand, if he’s always been this way but you are no longer willing to live like this, then you need to make some hard choices. You don’t know what’s going on with your husband but you do know that you aren’t doing well. It’s time for you to change your dance steps starting with you. As you get stronger you will need to formulate healthy boundaries, including possibly separating, so that he cannot knock the wind out of you as he is doing now.

Friend, share collective wisdom. If you were in her shoes, what next step would you take?

Morning friends, Hope you had a great weekend. I got a bad cold but had a great speaking event at the Casablanca Bridal Shop in Newport Beach, California. The sponsoring organization, Celebrate Forever, seeks to educate couples on what makes relationships work, and equip them with the tools and skills to transform bad relational habits…

Morning friends, I leave in a few days for the long drive home to PA. I’d appreciate your prayers that we have safe travels and no car problems. We’ve had such a great time with our granddaughters. I hate to leave them, yet I am ready to get back to my own bed, my own…

Morning friends, Thank you for sending me examples of the lie’s that you’ve been told that have kept you stuck, afraid and feeling hopeless in your destructive marriage. I am going to do a Facebook live this Thursday, April 20 at 7:00 PM ET to discuss Three Things that Christian Women are Regularly told to…