How Much Should I Forbear

Do you ever read the Bible and “see” a new verse in there?  One that you’ve never seen before even though you’ve read it from cover to cover several times? I love that about God’s word. It’s living and active. It comes alive in different places in new ways each time we read it. The verse that popped for me recently was in 1 Chronicles 28:20. I confess Chronicles is not a go-to book I read often. But here is the verse that popped out for me, and it’s so applicable to our ministry here, I thought I’d share it with you.

“Be strong and courageous, and do the work. Don’t be afraid or discouraged, for the Lord God, my God, is with you. He will not fail you or forsake you.”

God has given us each our own work to do. It’s not fixing someone else’s life, but rather stewarding our own so that we reflect God’s character and God’s wisdom especially in today’s tough times and with ungodly, unloving people. It’s easy to pay back evil with evil. It takes strength and humility to overcome evil with good. 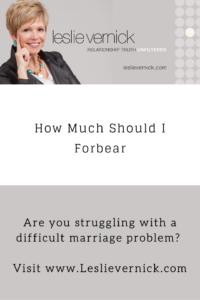 This week’s question:  Thanks to you and a couple of other helpful counselors, I realized last year that my marriage was hurting and in need of change. I confronted my husband with some of the things he was doing, and we sought counsel from a Biblical counselor who said we should most definitely not split up, but work on things together.

Ultimately he did not change until I asked him to leave and get counsel by himself. By then, I had gotten a couple of pastors involved, and he felt compelled to go. Counseling seemed to be effective. He was gone for two months until he seemed truly repentant and I was willing to let him come home. He has done better than before but has gone back to some of his old behaviors. It’s mild compared to what it was before, but how much should I let slide? Am I to expect perfection now? How much space should I give him to grow? And how can I talk to him about these issues without becoming a nag? Thanks in advance for your help.

Answer:  This is such an important question because you don’t want to wait until things get back to where they were before you separated. [Tweet “You are wise to understand your husband will never be perfect. Nor will you.”] However, there are certain attitudes and actions that are toxic to having a healthy, safe, and trusting marriage.

You don’t give specifics in your question but let me give you some examples. If his problem is with out of control anger and in the past his rage led to some pretty dangerous or scary things and now you see his anger ramping up, do you forbear and wait? Or speak up? If his problem was with pornography or other addictions and you see him slipping into some old habits, do you close your eyes and give him his space to grow or do you have a tough conversation with him?

There are two essential things that a person must possess if he or she wants to change and maintain that change. The first is self-awareness. [Tweet “When we want to get healthy, we must notice when our actions or attitudes are not healthy.”] For example, is he aware he’s getting angry?  Is he aware that he’s making the same old excuses he used to make when he got close to doing whatever you objected to in the past? Is he aware he’s slipping into his old ways? Maybe not all the way back to where he was, but is he conscious that his old history is now becoming current history? If not, his counseling did not help him learn the most important aspect of maintaining change and that is noticing when you’re slipping into your old patterns.

The second thing someone must do if he or she wants to change and get healthier is to listen to the feedback of others. Your marital history shows he didn’t listen to your feedback when you tried confronting him earlier. When he went to marital counseling with you he didn’t listen to that feedback or counsel either. He only paid attention when you told several pastors and separated. Then he went for counseling and seemed repentant, so you reconciled.

It seems like his motivation to “change” was not Christ but getting you to allow him to return home. Now that he’s home, the motivation to grow or change isn’t there like it was before.

So here is what you can do to see a little more clearly what’s going on. Give him feedback. Not in a nagging way because you can’t nag someone into change. But speak the truth in love. Here’s an example.

“I’d like to talk about something that is concerning me. When would be a good time?”  (If this first statement makes him angry, defensive, argumentative or shut down, you already know he’s not going to listen to the rest of what you have to say. Now you know that he does not have the desire to grow or change because he’s unwilling to hear your concerns – just like before).

If he does agree to listen, then say something like this. “I’m seeing some old familiar patterns resurfacing in you or in our relationship that scare me. I thought you had decided to stop……….or change …..and that’s why I said you could move home. It’s not okay with me when you……..or do………  (you fill in the blanks)

I will not be a nag about this. But if you have no heart to change this, I need you to know I will not allow myself to return back to the way things were. I’d like you to think about whether the change you said you were going to make was genuine or not.  And if it was genuine understand that right now you are having problems sticking to that change, and I’d encourage you to get some help to grow into the man you say you want to be.”

Then listen and watch his response. Change is hard for all of us.  We don’t do it perfectly and sometimes we do slip into old ways even when our desire is genuine. But usually when we receive feedback either from a loved one, a trusted friend, or even our mirror or bathroom scale that tells us that our unhealthy eating patterns have crept back into our diet, we stop. We reevaluate whether or not we really do want to make that change and then do it (or not).

You can’t change him. Only he can do that with God’s help. But you don’t want to let yourself slip back into old unhealthy ways of putting up with it either. As you continue to grow strong and healthy, you can speak into his life with grace and truth, hoping and praying he will listen (Hebrews 3:13). And if not, then you’ll have to decide what you can and cannot live with.

Friend, when you have found your own self slipping back into old unhealthy ways, what has most helped you to get back on track and keep doing your own work instead of focusing on what someone else needs to change?

How to I make good female friendships? I’ve been burned.

As most of you know, I spent a week in January, pausing my life in order to refresh my spirit, recharge my batteries, and reconnect with some of my girlfriends. I had a wonderful time laughing, crying, praying, resting, exercising, and being challenged by some wise and wonderful women. I highly recommend taking some time…

Morning friends, I am back in the USA but in the next few weeks, I will be visiting family in Chicago. As lovely as other countries are to visit, there is no place like home.   Thank you, Aly, for sharing with us last week.   Today I’ve asked another woman from our community to…