Is Not Talking Cruel

I’d appreciate your prayers.  I’ll be speaking at the River Conference this weekend at Prestonwood Baptist Church near Dallas, TX. This is my first event since COVID and I’m sure it will feel a little weird.  Pray that people are met by God this weekend and find help to help others. 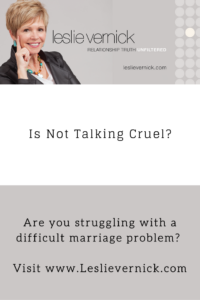 Question: My desires are to stay well, overcome evil with good, obey God, keep myself in the love of God, live out CORE. I have been seeing things as they are and have stepped back to observe rather than ‘try to fix' by explaining, defending, encouraging and inviting us to work together since the last few years.

I have openly explained that he is free to be who he wants to be. No longer am I going to talk, talk, and talk to try to make things better when there is still not mutual respect, investment and care. I have slowly and lovingly said that I want the best for both of us and our marriage and that the best is God's way but it takes two people to walk God's way to make a marriage of God's design.

As of late, I quit talking all together unless extremely necessary. i.e.: (where did you leave the car keys?) I go out for walks, visit friends, etc. and no longer say where I am going. I make something to eat for myself, etc. I speak respectfully when I do need to say anything at all.

My reasoning for what I have been doing as of late is because I considered these things:

So my question is this:

Is my not speaking except when absolutely necessary, living my own life basically, doing my own thing for now an unwise idea or a wise one? Should I handle ‘detaching' a better way?

Two years ago I talked to him about the fact that all the things that I had suggested to make a beautiful marriage were only honored by me and not him so I invited him to initiate what he would like to do. He has made no attempt.

Answer:   I’m sorry this has been so painful for you. Living with a spouse who does not desire to engage in anything more than superficial niceties can be tough. He interprets a lack of conflict coupled with superficial chit chat as “all is well”.  You don’t want him to look at it that way and therefore stopped talking except for necessary conversations. And is that to protect you from further pain or is that to continue to “show him all is not well?”

[Tweet “Detaching doesn’t necessarily require silence and no conversations.”] Detaching means you let go of your need/desire for him to get it. To change. To be different than he is right now. In other words, detaching means you live your own life, do your own work and accept he does not want to engage in personal or difficult conversations with you. He does not want you to tell him what he’s done wrong or expect him to apologize. You’ve told him that he’s free to be the person he wants to be yet you’re not okay with that person.

You’ve learned that things can be superficially peaceable between the two of you as long as you abide by his rules. When you transgress and want more, you pay. You know that. You’ve known that for years. Yet it’s hard for you to be at peace with this living arrangement. It seems like you still have hope or some expectations that he’ll get it and change.

I wonder if subconsciously you are still trying to control him. For example, you wrote, “I therefore stopped saying anything at all now. I don't want to do things to control an outcome but I feel if I just never confront him and talk about superficial things (now that I stopped trying to change him)… I believe he interprets that as all is well and it isn't”.

I wonder if you still want to control the way he interprets your silence or lack of silence. You don’t want him to think everything is fine when it’s not fine for you. You want him to understand how that bothers you when he doesn’t acknowledge it or apologize for it. And the things you want are totally reasonable but with your spouse, history shows you they are unrealistic. Whether you continue to confront him, or you go dark with silence, you want him to get it. It’s a different strategy, but same outcome.

What’s your goal in your own work right now? You said you want to stay well but for what purpose? Can you accept he’s not motivated to work on a better connection with you or a deeper relationship with God through repentance of his own sinfulness? Can he be pleasant enough or safe enough to live together as long as you stay on the surface of things and not require or expect him to change or get it? Can he care for you in a superficial way like financial stability, or helpfulness around the house and can you care for him in superficial ways like preparing meals or other support? Can you both experience the best parts of your life – financial stability, family holidays, grandkids, a nice home, some mutual help and/superficial support if nothing else changes?  Only you can decide that, but that is your work to do to stay well or leave well.

It seems like your silence has two purposes. One is to protect yourself from continued disappointment. He’s not all that interested in a deeper friendship or changing himself. That’s understandable. But the other purpose is to communicate without words, “It’s still not okay with me that we live this way.”  If it’s not okay with you and he does not change, then what’s your next move? [Tweet “Continuing to knock your head against the wall hoping he’ll get it and change is the very definition of insanity.”] Silence is your way to tell him it’s not OK but what outcome are you waiting for? He’ll get it? He’ll finally give you an apology? Then it does seem like you are still waiting and hoping that he will change his ways. I think it would be healthier for you to believe him.  He’s not changing.

Friend, what does detaching mean to you?  How did you do it and stay well?

Topic: Part 2, How to I “Minister” to an Abusive Spouse?

Good evening friends, I had an extraordinary weekend that has left me physically exhausted, but with a great feeling of accomplishment. I PASSED my motorcycle safety course and am now the proud owner of a motorcycle license! Never in a million years would I have thought I would do this let alone pass! The course…

Am I Empathetic Or Enabling?

Morning friends, It’s a glorious day today at our cabin. We were in Phoenix over the weekend to bring our granddaughters home and it was pizza oven hot…..and draining. Drove back here yesterday and it is more pleasant. For those of you who are interested in the Southern Baptist Training curriculum that I’ve been working…

How do I tell my mother she can’t visit my kids?

I’m back from vacation. This e-mail came my way a few weeks ago and I was busy with final edits so I didn’t get a chance to respond sooner but I think many of us struggle in similar ways with certain people in our lives. Forgive the lengthiness of it. I felt background was needed…