Am I Crazy Or Is He Lying

It’s hard to believe that our world has been shut down for a year now. I had planned a trip to France in April that was cancelled this week due to continued COVID restrictions. It’s easy to get angry and depressed. What’s much harder is to take responsibility for our own emotions in an unfair, unpleasant situation and figure out how to face those challenges or restrictions or new opportunities with positivity, patience, strength and dignity. That’s what I’m doing, how about you? 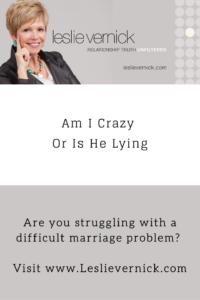 Today’s Question:  It took me many years to know (almost) for sure that my husband is emotionally abusive. In the beginning of our relationship it seemed like a fairy tale. I wanted to make him happy. I catered to his every need. I do want to add that I was not a Christian when we met. I would look for love any way I could get it and thought that usually meant through sex and being servant-like to guys.

So my husband seemed wonderful and made me feel secure at first. But soon that all changed. I was a stay at home mom and he took control of all the money. He would not give me money to do laundry at the laundry mat. He had to come with me to the grocery store. He refused to pay the bills but bought himself whatever he wanted. He told me I was too sensitive and that I always made him out to be the bad guy. He lied to me about small things and big things and said (and still says) that he has never lied to me and that I always think the worst of him.

Once I became a Christian a light went on in my head. I was worth something. We have been married 16 years and have two boys. My oldest son wants me to leave. He says “mom he treats you (us) terrible.”

I feel like I am crazy one minute and then the next minute I know that it’s emotional abuse.

This morning my husband said, “You seem to think I lie to you all the time when I have never lied to you.” He can seem so calm and in control at times and so out of control others. He will not listen to me and when I comment about his behavior or something he said, he tells me “That’s ridiculous.” Or “You don’t know what you’re talking about.”

Answer:  It does feel crazy, doesn’t it?  My heart goes out to you and anyone else who lives this way. This doesn’t sound like a healthy marriage but more like a POW camp. But here’s the deal. [Tweet “Nothing will change if nothing changes.”] That means that if you want something to be different, you will need to be the one who initiates some changes. The way it is right now is not only toxic for you and your boys but believe it or not, it’s also destructive for your husband.

First, it’s important for you to get some wise Christian support. I’m glad you are here on this blog. When we are isolated, the words of an abusive person ring truer than when we have other voices to listen to. The book, Unbroken: A World War II Story of Survival, Resilience, and Redemption tells the true story of Louie Zamperini, an Olympic runner who was a prisoner of war during WW2. Isolation was one of the tactics used by the Japanese to mentally and emotionally break the captured soldiers down. When they weren’t allowed to communicate with their fellow prisoners of war and receive support, comfort, and validation, it was impossible for many of them to stay strong, hopeful and even sane.

But another important thing I realized as I read this book is that the Japanese soldiers who treated American prisoners inhumanely didn’t feel good either. Lording over someone and being cruel doesn’t only dehumanize and degrade the victim, it dehumanizes and degrades the person doing the abuse. For the best interests of everyone in your family, it’s time to get strong enough to initiate some changes.

There is a tremendous imbalance of power and control in your home. Your husband has all the power and control, you are the object he controls, not the person he loves. He controls the finances, he controls the mood of the home, he controls what you do, where you go, and even tries to control what you think and how you feel. That’s why you are constantly questioning your own thoughts and feelings and ask yourself “am I crazy?” He decides what you think, not you. He tells you what you should feel, not what you do feel.

You mentioned that he twists reality telling you he’s never lied to you. But your own gut and experience tells you something very different. That’s crazy making and not God’s best for you, or for him.

On my website there is a free resource page where you can find my article, Who has the Final Say? God’s design for marriage is to be a partnership, not a dictatorship. When you became a Christian, you began to experience your true value and worth. Now it’s time to learn to live in that truth. [Tweet “A diamond is still a diamond, even if your husband throws it in the trash or tells you it’s just a rock.”]

When you know and believe that you are a loved, valuable, worthwhile human being and live from that core place, toxic people lose their power to manipulate you. They can’t control and intimidate you as they once did when you felt worthless, dependent and needy.

Changing you might also require you to be less financially dependent and find some means to earn money of your own. Having the ability to support yourself and your children, if necessary, gives you choices you don’t have when you are totally dependent upon your oppressor.

Journaling what he says and does when he’s out of control as well as what is said and agreed upon will help keep you clear minded. The journal isn’t to prove to him that he’s emotionally abusive or lying but it’s to keep you from feeling crazy when he denies doing what he did or saying what he said.

As you get stronger, you can invite your spouse into necessary changes. If he refuses, don’t beg, plead, or badger or argue. Simply step back from the relationship and allow him to experience his own core loneliness, unhappiness, and misery without taking responsibility for his feelings.

Next time he is disrespectful, abusive, or controlling, lovingly but firmly invite him to treat you and your children with kindness and respect. If he refuses, (which he very well might do), then he not only loses the opportunity to grow as a husband and father, he loses the closeness and fellowship of his family.

Unfortunately, sometimes consequences including separation are the only things that will wake a destructive person up enough to begin to realize change is required. As you already know, actually doing the hard work of change is a whole different step and requires time and consistent effort as well as accountability and support.

That’s why you both need wise people around you to help you on this journey. There is no short cut to growth and healing, but it is God’s will that you both know Him and mature and live in the truth of who He is and who we are in Him.

Press on dear one. For your growth, for the wellbeing of your husband and the future of your boys and family, take these next courageous steps and see what God does. Don’t focus on fixing your marriage or your man. Focus on strengthening your own CORE and putting God first and leaving the outcome of your marriage to Him.

My educational and support group CONQUER will be opening up to new members in April. I encourage you to join the wait list so you get notified when it’s open. It’s a group where you will find support and help.

Friend, what other steps have you taken to shift the imbalance of power and control in your marriage?

My Husband Doesn’t Speak To Me. Do I Have To Have Sex?

Morning friends, Went for another hike last weekend with friends. This time, someone knew where we were going and so all I had to do was follow. What a great illustration for us and Jesus. He knows where we are to go, what steps to take, what pitfalls and dangers are ahead. He shepherds the…

Morning friends, I am back in the USA but in the next few weeks, I will be visiting family in Chicago. As lovely as other countries are to visit, there is no place like home.   Thank you, Aly, for sharing with us last week.   Today I’ve asked another woman from our community to…