When Is It Biblical Abandonment?

How many of you set a New Years Resolution for 2021? Maybe to get into shape or lose weight? Those seem to be the #1 goals most people set. Did you know that most people who make New Years Resolutions don’t keep them? In fact, about 3 weeks into January, they are back to their old habits. That’s why it’s so important for you to build new habits, not make new intentions. Remember, our actions are what changes us, not our good intentions.

What small action step could you take this year to reach one of your goals? For example, last year I realized that because I sit so much (working) I was losing some lower body strength. But I know myself. My intentions to regularly exercise at the gym, or even with a video never happened. I was always busy with something else. I knew I SHOULD, but I didn’t. So what COULD I do?

This was one small step I did take. Every morning when I brushed my teeth (which was already a habit I practiced), I would do 50 squats while brushing. Every night while brushing, I would do 50 lunges for each leg. That’s it. I added these two-minute exercise sessions while doing something that I already did, brushing my teeth.

For a whole year, I squatted and lunged, twice a day, 7 days a week. And guess what? Those small changes made big changes over time. My legs are stronger. I have better balance. My core got stronger too because it takes some coordination to brush and lunge or squat at the same time.

Friend, you don’t have to take big steps to make big changes. What small change could you commit to that would help you get closer to where you want to be?

Maybe it’s reading one chapter in the Bible every day. And then doing it. Maybe it’s standing on one foot while you brush your teeth to improve your balance. Maybe it’s making your bed right after you get up so that your environment feels more orderly or beautiful. Make it small enough that you can do it, no excuses. And then do it, do it every day and watch over time what happens. 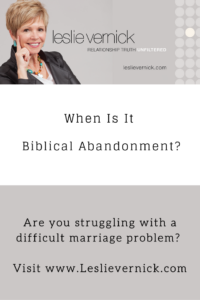 Todays’ question: At what point when a husband feigns fights that result in lengthy and innumerable separations with ABSOLUTELY no contact, do I consider it ‘abandonment’ and file for divorce?

When I mention divorce, he says he doesn’t want a divorce; however, his actions are not commensurate with his behavior (stonewalling) the last 10 years of marriage. PLEASE HELP.

Answer:  I’m going to respond to your question because it’s a very typical question I receive where you already know the answer, but you’re afraid to take action on it. You ask others so that you can gain validation or confidence and that’s fine, but you are still the one who will need to take action.

Your husband does not want a divorce he says. But what does he want? And what do you want? That’s the question. And is he (and are you) willing to take action to make that happen?

Wanting something isn’t enough. I may want to get in shape or change jobs or read my Bible through in a year or save more money. There is nothing wrong with my wants, but they will not become a reality unless I take action steps towards doing what’s required to get what I want. Click To Tweet

Your husband says he wants a good marriage, but then avoids dealing with problems or conflicts and runs away or stonewalls. It’s like a smoker saying, “I don’t want to get lung cancer.” Of course, he doesn’t, but is he willing to stop a habit that will make getting lung cancer more likely?

You want the same thing but you can’t make a relationship work with someone who doesn’t want to take actions in line with healthy relationship patterns.

There is one word in your question that caught my attention. You said he feigns fights and then separates and goes no contact. What do these fights look like and what part do you play in this fighting? Does he provoke you to rage and then have an excuse to leave you? What is his rationale for leaving after one of these fights? Is there some work here for you to do in order to be healthier in your interactions with him during these fights?

The Apostle Paul addresses the idea of abandonment in 1 Corinthians 7 when an unbelieving husband wants to leave the marriage. Paul tells a wife to let him leave for God has called you to live in peace. (1 Corinthians 7:15).

What next steps do you need to take to move closer to what you want?

Don’t confuse yourself by thinking, “I want him to do his work.” You have no control over the action steps of someone else. Of course, you’d want him to change, but that’s not your work to do, it’s his.

He may want you to change too. And you can self-reflect if there is something you are doing in these “fights” that make things worse between you.

However, if he does not want to do his own work, what do you want for yourself? To get healthier? To get some closure and peace? Only you can decide what you want and then take action towards that end.

Friends, what small action steps have you taken to change you, that has made a big difference over time?

Is It Your Role To Be Submissive To Your Spouse?

Morning friends, What robust discussions we’ve had over the past two weeks.  I love how you minister to one another with the loving heart of God. If you have time, head on over to my Facebook Fan Page tonight (Wednesday) at 7:30 pm for my  Moving Beyond Challenge. It’s Easy! Simply Sign Up here.  Sometimes we need a little…

Please pray for me

Hello everyone, Today instead of answering a reader’s question I want to ask you all for prayer. This month I am over committed and I don’t know how I am going to do everything I need to do with excellence. That’s why I decided to forgo writing a response to one of your questions and…

How Can I experience God more deeply?

Q. I’ve been a Christian for a long time. I believe in the Bible and have asked Jesus to forgive my sins but I want to experience a deeper spiritual life. I don’t really know what it means to practice God’s presence or abide in him. Can you help me learn how to do this?…