Is My Hope Realistic?

For me, Christmas is the season for quiet.  For stillness. For reflection on the reality of “Emmanuel, God with us”

Pray for me that I would know that God is in this place. So many places the Bible reminds us that the person didn’t realize that God was present when he was.

How would your life be different if you lived in the reality that God is with you?  Always with you? 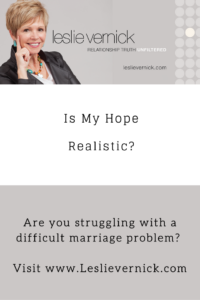 That was 6 years ago. I am unhappily married now for about four years. Separated 9 months ago. My husband is a doctor and was a pastor (stepped down last year). He has a temper, verbally is abusive. We have been in counseling for a few years.

Last year, I felt unsafe and prayed and spoke to the counselors and we separated. It is hard as people say just get divorced you cannot stay separated forever he might never change, you are young you can start over etc. He says I’m deserting him and suggests it is grounds for divorce.

Here is my dilemma.  I struggle to keep hope alive as nothing seems to change and my family are concerned for my safety and don't quite understand why I’m still in this. Please comment on how to keep hope alive if no change is evident.

I know to pray and read Bible, but am emotionally finding it harder and harder to be positive.

Answer:  I’m sure you do struggle to keep hope alive in the face of mounting evidence that your husband is not changing.  I also don’t hear anything in your question that says he is aware he needs to change. As the saying goes, you can’t change something unless you see it needs to change.

Let me ask you a question. Why do you need to keep hope alive? What’s the pressure to stay positive about your marriage or about him?  Isn’t it more Biblical to be truthful than to be falsely positive?

Also you mentioned that he’s accusing you of desertion, which he claims is grounds for divorce. It seems like he has no concept of the pain and fear he’s caused you. It appears that he believes that you owe him unconditional devotion as a wife, regardless of how he behaves. Is that true?

Giving up means you don’t trust what God is doing. Letting go and surrendering to God means “Not my will but yours be done.”  Jesus showed us this in the garden when he didn’t feel like going to the cross, it was painful, yet he trusted his Father and surrendered.

Jesus let Judas go, even knowing that he was up to no good.  The story of the prodigal son in Luke 15:11 shows a loving father, letting his younger son go to live a sinful life. He didn’t beg him to stay or cling to him when the son wanted to leave. He let him go.

Perhaps what you need to let go of is your hope in what God will do in your husband. Henry Cloud has a chapter in his book Necessary Endings called Hoping Versus Wishing:  The Difference Between What’s Worth Fixing and What Should End.

What reason is there to have hope that tomorrow is going to be different?  (The best predictor of future behavior is past behavior)

Cloud says, “The difference between hoping and wishing is that hope comes from real, objective reasons that the future is going to be different from the past.  Anything other than that is simply a wish that comes from your desires.”

God calls his people to put their hope in him, not necessarily in what he will do, or what we think he should do.  Elijah is a good example of a godly man with misplaced hope.  He believed it was God’s will for King Ahab and Jezebel to repent and he was right. It was God’s perfect will, but that’s not what happened.

I don’t think Abigail hoped that Nabal would change. She knew who her husband was and lived in that truth to protect her family from David’s outrage at Nabal’s foolishness (1 Samuel 25)

I don’t think that David hoped Saul would change after repeated lies and false promises. David knew that Saul was out to kill him despite promising change (1 Samuel 24,26)

Proverbs reminds us, “Hope deferred makes the heart sick, but a dream fulfilled is a tree of life” (Proverbs 13:12).  In other words, when you hope and hope and hope and your hope is continually dashed, it makes you sick inside.  It sounds like that’s where you are at right now. But if what you hope for is showing some movement, then your hope grows and flourishes into a tree of life (nourishing and alive).

The first component of CORE strength is to live in truth and to stop pretending. I don’t have hope that God will enable me to fly if I jump out of the window.

Could God perform a miracle and enable me to fly? Yes he could, but will he defy his own laws of gravity?  He might, but it’s not something I am going to hope for or test. That would not be living in the truth of what I know and how God acts.

In the same way, there is no evidence in Scripture that God changes people without their consent and cooperation. Therefore to hope that he will, is not living wisely. But to hope that God will work in you through the painful process of letting go is living in truth. From that place you can regain your energy and stay positive for God promises he will cause all things to work together for OUR GOOD, which is to be conformed to the likeness of Christ (Romans 8:28,29), and we can hope in that truth.

Friend:  What helped you to let go of hope without giving up that God was still good and still at work, even if the outcome didn’t turn out the way you wanted it to?

Help, I Am Bitter and Angry

Morning friends, I just returned from attending the American Association of Christian Counselors Conference in Nashville. It was an amazing event with over 7,000 Christian leaders from all over the world. I spoke twice on my new book and had lots of opportunities to talk with people…

Is Restitution A Part Of Repentance?

Morning friends, I hope you have something fun planned for July 4th. My 3 granddaughters are coming up for the weekend with their parents. We have installed a zip line and a slackline on our cabin’s property. One more thing we need – a big tire swing. Everything kids love to do. I’ve been practicing…

What Details Do My Kids Need To Know? Part II

Morning friends, Today’s question is a follow up to last week’s discussion on what to tell the kids about what’s happening in the marriage. However, this week’s question is rooted in one mom’s fear of parental alienation when she separates. This is a very real issue in high conflict relationships and something you must be…