Can I Honor God Even If I Disobey My Spouse?

I hope you were able to have a good Thanksgiving even if you celebrated with just you and God. Holidays always bring their own stress, but with the virus on the upswing in many states, it can create even more dilemmas with having boundaries and learning to speak up for yourself.

Our free webinar on 3 ways to move beyond Victim Mindset is Thursday, December 3, at noon or 7:30 pm ET.  Register here. 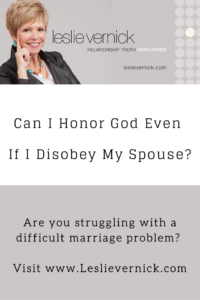 Today’s Question: I have learned so much since discovering your resources! I especially appreciate the sample conversations you give us in this blog; they are so helpful in illustrating what a healthy one looks like.

Nine years ago our eldest daughter moved out in part because of my husband's emotional and verbal abuse toward her. He disowned her and coerced me to also. I agreed in part because I had had an alliance of sorts with her and felt guilty about it.

How does “forsaking all others” from our marriage vows apply to this situation? I'm also concerned about how the resulting unpleasantness would affect our teenagers still living at home. Thoughts?

Marriage needs to be a priority but in many homes, children take center stage. However, I also believe that being “marriage-centered” is not any less problematic or unwise than being “child-centered.”

We are called to be God-centered people. Therefore, one question I usually start with when I feel spiritual confusion around an issue is this: What course of action would honor and glorify God the most? Click To Tweet

However, his older brother felt indignant because of the kindness his father showed his wayward brother and refused to attend the family party. The older son didn’t sin in the same way his younger brother sinned. The older brother’s sin was his pride and self-righteousness. His refusal to attend the family party insulted his father’s position and his kindness, just as the younger brother’s leaving home with his early inheritance insulted the father. The father didn’t disown his prideful son even as he pleaded with him to welcome his younger brother back home. Both sons disappointed their father and behaved sinfully. Yet the father remained a devoted father, an example of love and truth.

Let’s fast forward to you and your situation. It’s been nine years since you spoke to your daughter. Do you think this honors or glorifies God? You’ve acquiesced to your husband’s request not because you believed he was right but because you felt guilty about your own unhealthy alliance with your daughter and were afraid of the repercussions. Does that glorify God?

Here’s another story in the Bible that may shed some additional light on your dilemma. Abigail was married to a wealthy but surly and foolish man named Nabal. Everyone knew how ornery Nabal could get. David (before he was the king) was traveling in Nabal’s territory and requested hospitality and kindness for his men. He reminded Nabal how he and his men were gracious to Nabal’s shepherds when they were traveling near him. But Nabal refused to extend standard Jewish hospitality to David and his men. David reacted angrily and threatened to kill everyone in Nabal’s entire household. When Nabal’s servants heard what Nabal did, they ran to Abigail and asked her for help.

Abigail knew just what to do. She prepared food and drinks and loaded them on donkeys and went out to meet David’s men as they were heading her way to seek revenge. She didn't make excuses about her husband’s character. She humbly asked David to accept her apology and the meal she prepared for his men.

There are many lessons we can glean from Abigail’s courage, David’s uncontrollable anger, and Nabal’s foolishness. But did Abigail dishonor her husband by going against what he said? She was not submissive to his order. But were her actions glorifying to God? I think they were. And, later the story tells us that when Abigail told Nabal what she had done, Nabal had a stroke and died (See 1 Samuel 25 for the story).

Now let’s look at the submission question. Does God call a wife to give unquestioning submission to her husband even if he asks her to do something or cooperate with something wrong or hurtful towards other people? No. The Bible qualifies submission as “unto the Lord” (Ephesians 5:22). When a husband asks his wife to do something wrong, I do not believe she should feel obligated to submit. She might feel afraid to dissent, but the Bible does not call her to submit.

I’m glad that you told him already that you want to reach out to her. He told you if you do that, he will leave the marriage, but you doubt he will follow through. Before you take your next step, make sure you are ready to deal with the fallout if you contact your daughter. Make a safety plan, make sure there are consequences set up if he gets abusive or if decides to leave the marriage. I hope you can let him go if it comes to that.

He is positioning himself as god in your family, not a husband. He believes he has the right to judge and control everyone around him and if they refuse, he will punish. That is not his role but as long as you cater to that, his delusion is reinforced.

Let me give you some ideas about how you might approach him. But keep in mind, it’s never about saying the right words. Jesus had the right words and he was still hated sometimes. You have to be ready internally to challenge him and stick with your resolve because he will not like it and may escalate his abuse.

“It’s been nine years that we have talked to our daughter. I sense God wants me to reach out to her. I know you don't like that, but as I read the Scripture, I feel called to be a minister of reconciliation (2 Corinthians 5:18-21). God wants me to be a peacemaker and to love other people, including our enemies, including our very own daughter.

You may have different convictions than I do but I have to listen to God first and am going to reach out to her. She has hurt us, but we have also hurt her. You feel she is wrong, but we have also done wrong to her. I believe as a woman of God, as much as it depends on me, I am to do all I can to bring about peace and healing in our relationship” (Romans 12:18).

Friends, if you were in this kind of situation, what would you do?

Help, I’m discouraged. What can I do?

Morning friend, We did it. We launched our new Podcast, Relationship Truth: Unfiltered. I hope you have listened to the first few episodes and subscribed. This week I’m talking about what defines a relationship as healthy or unhealthy? To listen, click here. I’d also love to hear from you regarding what topics would you like…

Morning friends, Summer is well underway but it feels different this year doesn’t it? We’re in the midst of history-changing moments and my hope is that it’s creating change for the better. My granddaughters left to go back home this weekend. We had fun painting and horseback riding. My prayer is that they grow up…

Do I have to give him another chance?

Blessings Everyone! Lately I have been deeply grieved by the depth of our own self-deception and how it so impacts our relationships with one another. Being a counselor you’d think I’d get used to it but I don’t. Sometimes I have to confront someone’s self-deception. Even after all these years, it always surprises me when…