My Husband Doesn’t Speak To Me. Do I Have To Have Sex?

Went for another hike last weekend with friends. This time, someone knew where we were going and so all I had to do was follow. What a great illustration for us and Jesus. He knows where we are to go, what steps to take, what pitfalls and dangers are ahead. He shepherds the way. Others may think they know the way you’re to go, but that’s not always true. Stay close to him. He is the only one who knows you and loves you perfectly.

To sign up for my free webinar on December 3, on living your own story instead of being a victim in someone else’s story, sign up here. 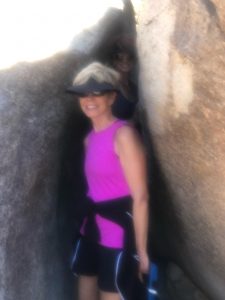 Today’s Question: My husband has not spoken to me for months but still wants to have sex with me. Am I wrong for refusing? We are both Christians.

Answer: You say that you “refuse” to engage in sexual intimacy with your husband who has not spoken to you for months. You’re wondering as a married Christian woman if that’s okay with God.

On some level, you must believe it’s acceptable since you are continuing to refuse his overtures for sex. Since he has not spoken to you in months, how does he communicate with you that he desires sexual intimacy?

Here’s the bottom line. Touch and talk are the primary channels human beings use to become more intimate with one another. They are also the primary ways we harm one another. For example, you can talk superficially such as, “Nice weather we’re having,” and never really get to know someone personally. Intimate conversation goes deeper. Intimate talk is about sharing one’s dreams, goals, ideas, and feelings. Personal conversation builds closeness and intimacy. On the other hand, conversations, where there is screaming, mocking, degrading, demeaning, and dismissing comments, kills closeness in any relationship. It makes conversations feel unsafe. Refusing to talk to someone for long periods of time is also manipulative, punishing, and breaks trust.

The same holds true with touch. You can shake hands (pre-COVID) with lots of people that you will never build significant relationships with. Physical closeness moves beyond superficial touch to personal touch, a hug, a pat on the back, a squeeze on the shoulder. Physical intimacy with someone moves even closer with kissing, sexual touch, and mutual nakedness. And, in a moment of anger a slap, a punch, a pinch, or forcing someone to do something sexually breaks trust and safety. And that always kills intimacy.

God does not only care about the sex act in marriage, he also cares about the relationship that expresses that sexual act. God created sexual intimacy for our good and our pleasure. It cements people together. That’s why he tells us not to be casual about sex and to save it for a committed, safe, relationship, i.e. marriage. Click To Tweet

So right now, your husband has withdrawn all conversation from you. He refuses to talk. Yet he expects you to be willing to engage sexually with him. That makes no Biblical sense. He’s treating you like a body to use, not a person (wife) to love. You are within your Biblical right to refuse to enable that kind of selfish thinking.

To love him well doesn’t mean letting him use you sexually so that his sexual needs are satisfied. Rather it means you will be strong enough and loving enough to confront him on his silent treatment and invite him into a meaningful conversation about the status of your marriage so that hopefully all aspects can be healed and restored.

If he refuses, don’t beg him to do what he is unwilling to do. But don’t pretend you have intimacy when there is this huge problem in your relationship he refuses to discuss and resolve.

Meanwhile, get some help for your own self so that you don’t beg, cave in, or get reactive and bitter. The silent treatment is a manipulative tool of coercive control. If he can get you to react to it by breaking you down, he will continue to use it to control you to get what he wants. This is an immature and unhealthy person’s way of handling his or her own internal feelings and problems. When you notice it controlling you, you have your own work to do even if he never changes.

Friends, How have you been able to stand strong yet loving against the manipulative tactic of the “silent treatment” when someone has used it on you?

How do I let go of my dream?

Thanks for your encouraging words about last week’s blog. Today’s question has to do with letting go. Question: I read your book, The Emotionally Destructive Relationship, and am working to grow and heal but there is something I can’t seem to get past. I met my husband (now ex-husband) in high school and we married…

Good morning friends, I’m in sunny California celebrating my granddaughter’s third birthday.  She is such a joy to watch growing up. She wanted to be a princess, so here are some pictures of her in her princess dress as well as pictures of her two sisters enjoying her birthday party.    In light of the…

Are You Willing To Suffer In An Abusive Relationship?

Morning friend, Thanks for being here and part of our community. We need one another. Women all over the world are being abused and mistreated and sadly many churches continue to misadvise women on how to respond. If you need more connection and community with other like-minded women, CONQUER, my educational and support group is…