Identifying and Owning Your Problem 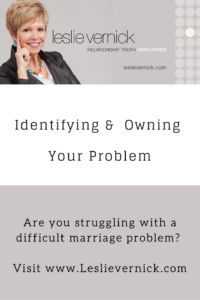 
I have been married to my husband, who is in his mid 60's (which he acts like at home), for nearly five years. Yet, to the public, namely young attractive females, he is extremely charming and acts like he is in his 30's. He comes off as being the nicest and most caring guy in the world.  I'm often told how lucky I am! These young women eat up his attention and vice versa. He will go out of his way to be noticed, finding a reason to be standing by them and making conversation. He is very empathetic (which he never shows me) when they have problems, especially to his daughter-in-law that he hangs out with when he visits his son back east.

I have watched him numerous times scan a room using his peripheral (I call it shifty eyes) and then set out to make his move. One time in a store, we were walking along and then I realized he was no longer walking with me. I looked back and, sure enough, there was an attractive lady coming down the aisle and he had stopped to pretend like he was interested in an item on the shelf, while I could see him looking at her with his shifty eyes. Even when caught in the act, he will deny to the hilt and tell me I am just paranoid! The reason it's so obvious to me is his whole character changes, his body movements increase, and he acts all giddy.

My daughter’s husband has ruined our family. How do I cope?

Morning everyone! This past Saturday I spoke at a lovely church in Springtown, PA on the topic, Lord I Just Want to be Happy! It was so encouraging to me to see men and women excited to embrace the truths God sets forth in his Word for our emotional well-being and health. I love, love…

Do I Owe My Husband An Apology?

Morning friends, This weekend represented one of the reasons I moved to Arizona. The weather was absolutely spectacular. It was sunny and 70 degrees. Back in Pennsylvania, it was cold, dreary and raining and I was glad I was gone. My bones ache in that kind of weather and I crave the warmth and the…