My Husband Is On The Spectrum. I Feel Guilty Leaving.

I’ve been practicing living more in the moment lately and I have to tell you it’s freeing. When I can stop worrying about the future or regretting or ruminating about the past, there is a lot to enjoy and be grateful for right now.

For example, I was taking a bath, something I rarely do, but had played pickleball and was all sweaty. I have a big soaker tub but am usually in a hurry so showering is my go-to. But this night, I thought soaking in the tub would relax my tired and achy muscles. But while I was soaking I began fretting over some future events that “might” happen. I could feel my mood plummet and body tense as my mind was fixed on the “worst-case scenario” about what could happen.

Then I had this new thought.  I’m here, right now in this beautiful tub with lavender smelling bubbles all around me. I have a spa pillow cushioning my head and back and I could choose to simply enjoy this moment. I don’t know the future. I can’t do or fix anything about what I’m worrying about. But I can right now, be grateful for the relaxing warm water I get to soak in. I can enjoy the pillow that holds my head back comfortably, the soothing smell of lavender, and the silkiness of the soap bubbles against my dried-out skin. And, as I just stayed right there in that moment, life was good.

I wonder how many of those beautiful moments we miss because we’re looking backwards or forwards with anxiety or regret? Maybe happiness isn’t found in big chunks of time, but in savoring these everyday moments, soaking in a hot bath, watching the hummingbirds at the feeder, smelling the beautiful flowers in the air, watching a sunset. For me, I don’t want to miss the beauty and goodness of the moment because I’m not paying attention. How about you? 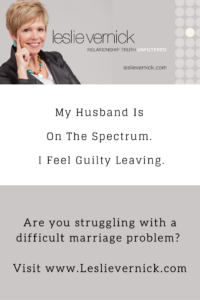 Today’s Question: I want to ask you about an Asperger’s/ Neurotypical marriage.  The damage done “unintentionally” by my husband who has Asperger’s, feels as though it is intentional. The damage feels the same, the PTSD diagnosis is still PTSD.  It did not change because the damage came from an Asperger’s man.

Answer: First, before I answer your question let me give a disclaimer that I am not an expert on Asperger’s or Autism Spectrum disorder as it’s better defined these days. However, I think I can answer your question and refer you to a few other resources that may help you as well.

Asperger’s syndrome (as it used to be called) is a developmental disorder along the Autism Spectrum in which an individual may be very high functioning and intelligent but lacks in social awareness and processing.  The brain of a person with this neurological problem works differently than someone without it, especially how it processes language and social cues.

He or she processes language literally. As a result, he often misses or misinterprets what someone really means, especially emotional nuances within conversations. For example, if you say, “I’m tired and sigh with a frown on your face” a normally wired person may ask you questions like, “What’s wrong?” Or “What happened?” Or “Are you physically tired or emotionally tired?” Someone on the Autism spectrum would zero in on the literal details of what you said and have trouble connecting the dots to gain a bigger or more nuanced picture.

Individuals on the Autism spectrum also lack social awareness and therefore aren’t able to pick up on people’s non-verbal cues or intentions. For example, most neuro-typical individuals (NT as they are referred to) would clue in when someone they were talking to was bored or disinterested. A person on the spectrum would not. Individuals on the Autism spectrum have difficulty perceiving people’s intentions, needs, feelings, or motivations and therefore often respond inappropriately in social situations. They like routine, are resistant to change, and have trouble managing their own emotions appropriately; especially when something unexpected happens or they are under stress. Describing or labeling their feelings can become a challenge for them.

Because a person on the spectrum has a hard time being aware of other people’s needs or feelings, he can be perceived as selfish and uncaring. He often has problems managing anger and can appear rude, insensitive, and indifferent although he is usually shocked when someone accuses him of this because from his point of view he does care. He just can’t see what’s wrong. He is neurologically unable to see things from another person’s point of view. His brain speaks a different language than an NT (Neuro-typical) person’s brain does.

Being married to someone on the Autism spectrum presents unique challenges and opportunities. But so does being married to someone with cancer, muscular sclerosis, blindness, bi-polar, or a spouse who is chronically unemployed or has a host of other difficulties. Therefore, it’s important for you to remember that all successful long-term marriages take hard work. No individual, no matter how talented, intelligent, or spiritual, has all 52 cards in their deck.  Therefore, all marriages require that we learn some fundamental lessons about acceptance, forbearance, tolerance, forgiveness, love, sacrifice, boundaries, patience, and speaking the truth in love where necessary. Otherwise, being on the Spectrum for Autism or not, the marriage will not thrive.

The biggest challenge whether or not you and your husband can make your marriage work will not be the diagnosis itself but what your husband does with it. For a moment, let’s put it into a different category. Let’s say your husband was born blind. He will unintentionally do some things that upset you. He may accidentally bump into and break a treasured antique vase that you received as a gift from your grandmother because he miscounted the steps he needed to take to get to the couch. Now what? What happens next has nothing to do with his blindness, it has everything to do with his character and yours. Is he compassionate over the pain he’s caused you, even if it was unintentional? Or does his blindness now give him a pass to not care about the impact his unintentional act has on you? Or worst case, does he use it as an excuse to be cruel and harsh towards you?

But you too have a part to play here. If you judge his breaking the vase as intentional rather than accidental, that incident feels different for you than if you accepted that it was an accident because he couldn’t “see.”

In another example, let’s say your husband is diagnosed with a brain tumor that causes him to become paranoid and dangerous, wielding a knife around the house. It’s not his fault and I hope you would feel great compassion for his plight. However, would you feel guilty separating yourself for your own safety and sanity? Is your safety or sanity unimportant because he’s ill?  Or has a neurological problem?

You say you have PTSD and want to leave but feel guilty.  First, I hope you are getting your own help for your trauma symptoms and guilty feelings.  There is a newer label for what you might be experiencing. It used to be called Cassandra Phenomena but has recently been relabeled Ongoing Traumatic Relationship Syndrome (OTRS).  It describes those who are living with chronic relational trauma, especially identified in the Autism/NT marriage. Would you feel guilty if you were sick with cancer and needed to have your own treatment? Or if your husband was a heavy smoker and refused to quit or smoke outside, would you feel guilty if you moved out because you developed asthma or lung cancer because of second-hand smoke? Taking care of you is important, Biblical, and not selfish.

I’m curious, however, what is your husband’s response to his diagnosis and the effect his limitations have on you? Does he show any concern, even if it’s hard for him to “feel” empathy? A while back a book came out written by a husband who was diagnosed with Asperger’s who wanted to do all he could do to win his wife back. It’s called, The Journal of Best Practices by David Finch.  I’d encourage you to read his intro on Amazon where his wife asked him to take the test and his response. Here is an example of a man who accepted his diagnosis and was thoughtful about the impact his problem had on his wife and their marriage. He then becomes a student, so he can learn what he can do to minimize that painful impact, even if he will never be cured or able to see exactly what she means or feels.

I can’t tell you it’s okay for you to leave your marriage. That is something you must wrestle through and talk to God about. Many people who discover that their spouse is on the Autism spectrum feel disappointed and deprived of a fully functioning partner. You must grieve these real losses and your desire for the deep emotional connection you thought you would have in marriage. However, there are other women who are married to men who are not on the spectrum who feel that loss also, or never get that connection either.

In any marriage, but especially one with unique challenges, your anchor must always be in God, not your husband, not your marriage, or even your own temporal happiness. Click To Tweet

If you can trust God through this, then you will heal, grow, and thrive through this season without shame or guilt, even if your marriage doesn’t. I have worked with women who have chosen to leave without guilt and those who have chosen to stay without resentment. Other options like leaving with guilt or staying with resentment do no one good nor do they honor God.

For those who might be wondering if they or their spouse might have Asperger’s syndrome, there is a free test for it at www.aspergerstestsite.com. You can read more about Cassandra Syndrome or OTRS here.

Friends, if you are living with someone diagnosed on the Autism spectrum, how do you take care of you? What resources have you found helpful? What encouragement can you give this woman whether she says or leaves?

Am I Crazy Or Is He Lying

Morning friend, It’s hard to believe that our world has been shut down for a year now. I had planned a trip to France in April that was cancelled this week due to continued COVID restrictions. It’s easy to get angry and depressed. What’s much harder is to take responsibility for our own emotions in…

Lessons On A Hike

Merry Christmas friends, I know for many of you today will be hard. I thought instead of talking about someone else’s problem, I would share with you something God taught me this weekend that might be helpful to you as you enter this New Year and New Decade of life. I’ve always wanted to hike….

Should I Love The Unlovable?

Morning friends,  I hope you are doing something for yourself this season to recharge your spirit. This year normal holiday festivities are changed.  They may be virtual or non-existent, but our need for community and connection remains strong.   Even if you are single, divorced, or living out a “new normal” during this time, remember, you…