I was in Chicago recently visiting with my family. This past weekend was my 50th high school reunion, but sadly it was canceled due to COVID (Of course – I graduated at 10 years old). It was a little eerie going to the airport and sitting on a full flight for almost 4 hours wearing a mask. But I’m ready to start doing normal, regular things again, are you? 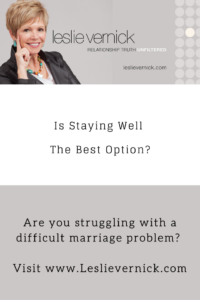 Miraculously, I have not seen or been aware of him drinking at all since he came home. He refused to speak to me or discuss anything about ways that I could help or support him or even the core reasons he drank other than to claim it was purely “situational” and that I & our relationship were the reason for his alcoholism even though that is absolutely not the case, as he had these issues before we met. He never officially entered any formal rehab or treatment facility after detox other than a few follow-ups. He claimed that they also agreed that he was an “exception to the rule as a classic alcoholic” and that nothing further for “recovery” would be needed.

Interestingly enough, not drinking, which all through our marriage was an enormous struggle for him, now seemed to be a miraculous NON ISSUE! With the absence of his drinking, our marriage remained void & his coldness & withholding remained if not even intensified more so.

My husband has been a master at cultivating a parental alliance with our daughter, which has created intense triangulation. About 6 months ago, my husband blurted out to me in front of our daughter that he would be divorcing me & that it would be no big deal & people do it all of the time. This was surprising considering the number of emotions he normally has.

He is a master at control & conceals, especially his feelings, words & emotions! Months past & nothing came of it after I tried to convince him that we are all under extra stressful times during this pandemic & it was not right to put any more stress or fear on to our daughter during this transitional time of her life. He is also aware that I was this age when my parents divorced & how hard it was on me. Since then, he has let me know that he does not love me & doesn’t want to be married any longer. He claims that there is no one else. When I tell him that things staying the same are not an option, he ignores me.

So my question is: Am I wrong to try to get well and stay well in a marriage that never was and looks to never really be any different? I know that I am not in complete control and that God is sovereign. I wonder if by staying, which is more in my comfort zone, as I have no income, that I’m not actually going against what God calls me to do? I feel a bit like a sitting duck just waiting for my official papers & replacement to ensue.

My other question is about the confusion of feeling like I need to learn how to treat him in the covert ways he has always treated me.

To detach, disengage, show no affection, have no sex, act like a robot! That’s an intimacy anorexic’s dream come true! He would have his ideal outcome a wife to complete his superficial image of a married man & I remain with the absence of a loving, intimate human spousal relationship! I know I have a lot of work ahead of me & it has been my greatest struggle to work on this while not focusing on him & our situation as well as trying not to have it take away time from my daughter when she wants the full-on constant interactive play & attention that my husband devoted to her from the minute he gets home until she is asleep.

I know it sounds crazy as most of the ladies here would love nothing more than that from their husbands. I put God first, husband second, children third (within reason) because the best thing you can do for your children is to love their mother/father & model a good healthy relationship.

It’s bittersweet that my marriage issues are so invisible & that leaves me feeling even more confused. I have been treated & felt so invisible for so long, and I came to believe that I was of no value.

Answer:  First, let me tell you something you probably have already heard before, but you’re struggling to believe it for yourself. You have value. Great value. Maybe not to your husband, but to God, you do. That has always been true and will never change. However, the person who needs to start valuing you more right now is not your spouse. It’s you.

You seem to be struggling with some hurts from your own parent’s divorce, which may cloud your ability to deal wisely and strongly with your current situation. Your husband has clearly told you he’s checked out of the marriage from what you have said. He’s said he doesn’t love you, nor does he want to be married any longer. His behaviors are consistent with those feelings.

You described him as an intimacy anorexic and completely shut down. However, from what you’ve said he does put a lot of energy into his relationship with your daughter. This could be healthy or not healthy; I don’t know. But you’re concerned that alienation has already begun.

His continued rejection of you as his wife, his life partner, is not a statement about your value or worth, but it is painful. Rejection always is painful. When your own parents got divorced when you were 11, it hurt. You probably felt scared and uncertain about what was going to happen to you. But their marriage problems and divorce said nothing about you or your value, lovability, or worth. It was about their sin and immaturity and their inability to work through and grow through their personal problems. It impacted you greatly. Sin has far-reaching consequences on others, but their problems, weaknesses, and sins were not a statement about your value.

That all said, your first question asked me if it would be a good idea to try to stay well in a loveless marriage. I don’t think that is a wise goal when you already know he’s checked out and ultimately planning to leave, even if he puts divorce on hold right now.

My advice to you is to start living in “what is” rather than “what if.” Living in “what is” means facing reality, not wishful thinking or worst-case scenario. It means that you regularly remind yourself that he has clearly told you and daily shows you that the marriage relationship is over. He doesn’t love you and wants out, even if he hasn’t finalized the ending yet.

What that means for you is that you must get comfortable with being uncomfortable if you want to grow and get stronger. Click To Tweet

Reality says he’s going to be gone sooner or later, and therefore learning to stay well is not your highest priority. Rather it’s paying attention to what you need to learn to live without him and be able to support yourself and your daughter. That doesn’t mean that you must leave him now, you are not ready to do that, but your goal is to get yourself ready. When he leaves, you want to be prepared and capable of handling yourself emotionally, mentally, spiritually, and financially.

To do that, I’d encourage you first to make sure you make copies of all your income tax records, savings accounts, financial records, bank balances, investments, etc. Make an appointment with an attorney for a consultation and find out if your husband was to leave you, what would be your next steps to be financially safe. If you have considerable financial assets, this is even more important. If you have very little then less so. You want to know and have a record of what you currently have so that you don’t naively give him the power to drain everything before he leaves without you knowing what’s going on and getting legal help to stop it.

Second, although you would love to continue being a SAHM, that may not be the wisest choice for you right now. I’d encourage you to think about what kind of work you can do and get yourself credentialed or prepared. You might need to go back to school, take some online courses, or re-license yourself if you previously had a career you enjoyed. Maybe you don’t have to work right now, but reality says that you might have to support yourself and your daughter at some point. Depending on the answer to your first step (financial safety), that will help you make better decisions about how much money you will need to live on if he does leave you.

Third, I’d work hard to make sure your bond with your daughter is secure, and you can support her relationship with her father without badmouthing him to her. However, if he is putting negative ideas in her head about who you are, or having an unhealthy dependency on her for support, you must get as healthy and strong as possible to counter those tactics in the wisest way.

In your second question, you asked how to learn how to treat him in the covert ways he’s treated you. That would not be God’s best for you. We are not to repay evil with evil but rather overcome evil with good (Romans 12:21). You may not overcome your husband’s evil towards you but doing the same back to him makes you just like him. How does that help you grow? More importantly, that is not what God wants for you.

Detaching your heart from your hope that he will love you or treat you decent is not being covertly abusive back; it’s simply accepting reality. You can still be a decent person and even kind to him where appropriate. You can treat him with respect (as a polite stranger or even an enemy) because that’s the kind of person you want to be. You need not resort to demeaning, snide, snarky, or covert attacks in retaliation for how he’s treating you. That only diminishes you. Your daughter is old enough to watch what’s going on. Don’t give her any reason to believe what her dad is saying about you. Don’t give him new ammunition to use against you with her if he’s already trying to alienate her affections.

I know this is not the reality you want, but it’s the reality you’re in. Just like the COVID-19 pandemic, it’s not what we wanted, but it’s where we are. Facing that reality and preparing wisely for your safety and growth through it will be the best way for you to use your time and energy to get stronger.

Friends, when were you facing this kind of unwanted reality, how did you let go of the “what if” and live in the “what is” space?

Five Indicators Of An Evil Heart

As Christian counselors, pastors and people helpers we often have a hard time discerning between an evil heart and an ordinary sinner who messes up, who isn’t perfect, and full of weakness and sin. I think one of the reasons we don’t “see” evil is because we find it so difficult to believe that evil…