He Says He’s Trying To Build Trust, But I Don’t Trust Him

I hope you had a relaxing and fun Labor Day weekend. The weather was beautiful here in the White Mountains and I probably walked close to 20 miles over the 3-day weekend.  I have loved walking here in the cooler weather, among the pine trees of Arizona. Yes, we have the largest deciduous pine forest in the world here in Arizona. No cactuses where I’m at and the terrain here looks more like Minnesota or the UP of Michigan. 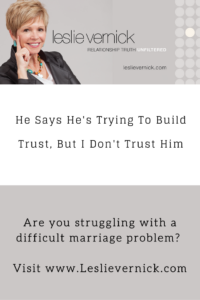 Today’s Question: I’m married 25 years to my high school sweetheart. Two kids, daughter age 20, and son age 12. I thought we had a fantastic marriage, with just the usual ups and downs and stresses that all families face. Before we got married, I knew my husband had a temper. He's always been quick to judge others. Our daughter, who just turned 20, and I have talked often about how he has a double standard…..”do as I say, not as I do”… and certainly don't call him on what he does wrong. His abuse over the years has been verbal, belittling, demeaning, controlling, and yelling. But that's not something a “good Christian” divorces over……so I thought I'd just live with it.


My husband seemed to go through these cycles of anger. He'd get angry at something, I'd have to pry out of him what was wrong, usually, something I did (the house isn't clean, laundry's not done, I don't cook enough, not enough sex). I'd straighten up and do better, and he'd treat me better. But 3 years ago, I found something that changed everything. He was mad at me, but all those checklist items that he normally accused me of were clearly not the problem at the time. So I got suspicious. It was then that I found out he was cheating on me.

Over the next 18 months, both of us in counseling, him for sexual addiction…I found out, in little drips and drabs that he had been with more than a dozen women, mostly one-night hookups, ever since about our 3rd year of marriage! He had been able to keep these lies a secret for more than 20 years! And I didn't know.

I finally asked him to move out of the house and I started divorce proceedings a year ago. But the attorneys became so expensive; he convinced me that we could “work out” a settlement without paying attorneys. I agreed, and we put a settlement in writing….which he refused to sign because “my word is good, I'll take care of you.”

He truly hopes our marriage will be restored in time, reminding me often that I am his wife and we are only separated. A year later, after watching him closely, he continues to lie…..has continued to cheat, blaming the addiction. His finances are nothing but lies, and he has recently decided to not honor a key part of our verbal settlement agreement. I have a new appointment with my attorney tomorrow, to resume divorce proceedings.

Outward appearances, he is charming, funny, helpful to anyone who asks, giving, hardworking….a great guy! We have been going to the same church since we were in elementary school…..we have the same friends.

His “story” to those he tells is that he “messed up big time,” and that he's working hard to restore my trust. They believe he is the good guy he portrays, still buying me flowers every week and bringing them to my workplace.

He is still active in our church, acting like nothing is different. However, I've been very, very reluctant to tell details, not wanting to put our friends in the middle, where they feel it's “he said/she said.” This puts me in a position where I feel as though I have little support from our friends there. It's a large church, and it's not unusual for someone to come to me each Sunday and ask if he and I “will make it.” I love my friends….I love the church we go to….how do I let them understand it is so much worse than they can imagine, that it is full-blown, Alice-down-the-rabbit-hole-bizarre.

Even though he's the one who cheated, I'm the one who filed for divorce….and it feels like that is what people key in on. He wants to restore the marriage, I don't think he can ever be trusted! How can I relay to friends and other church friends that with what he has done and what he continues to do, that I am doing the right thing?

Beyond that, if I feared his anger before, he is going to be beyond livid when the new papers from the attorney show up. How do I go about protecting my heart from his vindictive, acidic, 5-year-old temper tantrums? (that's what our daughter calls them). I am afraid of what he might do.

Answer:  I’m perplexed about your initial description that you thought you had a fantastic marriage with the usual ups and downs but then go on to describe years of temper tantrums, belittling, controlling behaviors, and verbal abuse that was standard fare even before you found out about all the lies and sexual acting out.

Next, you indicate that your husband is a master liar. He’s been able to keep his sexual addiction a secret for more than 20 years and you had no clue. I want you to ask yourself a question. When he convinced you to drop your attorney and agree to a financial settlement that he refused to sign because “my word is good” why would you believe that? His word has been anything but good.

Now a year later you continue to catch him in deceit and affairs and yet he’s telling everyone that although he’s messed up big time, he’s working hard to restore your trust.

What exactly is he doing to restore your trust? Buying flowers doesn’t restore trust. Telling the truth, being accountable, and keeping one’s word does. From what you have written, there is none of that. Click To Tweet

You have some really tough choices to make but one’s based on the evidence before you. There is no evidence that your husband is repentant or working on changing his ways. Charm is deceitful and your husband oozes charm, but he’s lacking godly character.

Does your pastor know what’s going on? I know you are reluctant to tell your “story” to all of your mutual friends and I affirm your desire to not to put them in the middle but at the very least, your pastor needs to know the full story so that he can support you and as the shepherd of the flock, hold your husband accountable if he is actively involved in this church. Your pastor not only needs to know about sexual addiction but also the years of deceit, continued deceit, and abusive behaviors.

I also think that you might need to sit down with your pastor either together or separately and work out a plan of what you are going to tell your mutual friends. Although he’s admitted messing up big time, he’s still being deceitful when he says “he’s working hard to restore your trust.” I think it would be more honest to say “I’ve messed up big time” and for you to say, “I don’t think that trust can be restored.”

You’ve decided to re-file the divorce papers. As you take this step you will need to accept that you will never receive everyone’s support. Some people will understand, others will not. It’s important as you take this step that you have a clear conscious and are sure of God’s leading. Also, ask your church leaders (and their wives) to stand with you and affirm that you indeed have Biblical grounds for divorce (as you do). Without having to give all the details to all of your friends, the leadership support would be a big help with your Christian community.

Last you asked how you could protect your heart from his vindictive tantrums? Probably the best way is to limit your contact with him. I would encourage you to have some firm boundaries right now. For example, no phone calls. No personal contact. E-mails only (so you have everything in writing) or communicating through your attorneys or an app called Our Family Wizard.

Keep in mind, he will not like your newfound strength because he’s used to manipulating and controlling what you do and how you think. If you don’t feel strong enough to be firm, surround yourself with some strong female friends who will help you stick to your resolve. He’s a sweet talker and seems good at convincing you that his lies are true.

Finally, remember that his tantrums and what he says and does are not about you and what you have done or haven’t done. Bottom line is that his actions and attitudes show you where his heart is. Jesus reminds us that it is “Out of the overflow of the heart, the mouth speaks” (Luke 6:46).  When someone is about to vomit all over us, we don’t ask ourselves why they are doing that, we just get out of their way as fast as possible.

I’d also strongly encourage you to attend my free webinar on Thursday, 9/10 on How Long Should I Keep Trying and How Will I Know His Changes are Real. Click here to register.

You seem to trust very easily despite your spouse repeatedly breaking your trust. From what you wrote, he is not rebuilding broken trust, he expects you to give it without any changes on his part. That isn’t smart nor does it work.

I’d also suggest that you join CONQUER, which is an educational and support group for Christian women in destructive marriages. You need other females who know what you’re going through, who believe your story and can help you with prayer, support, encouragement, and resources. To find out more about CONQUER, click here.

Conquer is only open twice a year and it opens its doors September 10th and closes September 18th…….  This is an opportunity for you to get safe, sane, and strong.

Friends, what steps do you think someone should make to start rebuilding broken trust?

Morning friends, This week I’m traveling to Toronto, Canada for some meetings. It’s so beautiful here. I wish I could stay longer. I’ve loved Vancouver, BC when I vacationed there a few years ago. But I’ve never been to Montreal or Quebec, which are on my bucket list. I know we have a few Canadian…

Why Do I Stay?

Good morning friends, I hope you had a wonderful Christmas. And if you didn’t, I hope you have let it go and surrendered it to Christ. Life is too short to brood over what didn’t happen. There is a freedom in learning how to let go of those negative emotions and if you need…

Do I Have A Biblical Right To Say No To Sex?

Morning friends, Thanks for your participation on the blog. That’s what makes the community. Can you believe I’ve been doing a weekly blog for over 10 years? We’ve made some progress in educating Christians and the church regarding the reality of abuse in marriage. But even on this blog, we still hear from people who…