In preparing for my free webinar next Thursday (September 10th) on How Long do you Keep Trying and How do You know the Change Is Real? (Sign up here), I received a question from a subscriber who asked what’s the difference between a marriage problem and a personal sin problem? 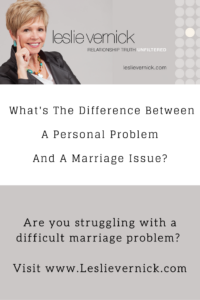 Most people like to think that when couples or individuals have problems in their marriage, joint counseling is always the best option. And for some marriage problems, that might be true. We know it takes two to tango and therefore most pastors and people helpers want both parties to be present in order to understand the dynamics of the relationship as well as work toward a godly solution.

However, when trust and/or safety issues have been repeatedly shattered and one individual in the relationship does not feel safe or has been harmed by another’s sinful behaviors, marriage counseling as an initial treatment plan is ineffective and often harmful. Let me share three reasons why.

1. The abused or betrayed or lied to wife (or husband) is afraid to speak or afraid to be honest during marital counseling. When you go to joint marital counseling, a counselor likes to hear both the husband’s and wife’s perspectives on how they see their problem. If one person continually lies, and the other protests or disagrees or calls the lies out, the counselor does not know who to believe and the one who tried to speak the truth is often in for more abuse after the session for “telling.”

Counseling of any kind, but especially marriage counseling cannot work when one person can’t speak freely or is afraid she has a price to pay when she does. Click To Tweet

2. When only one person is a “client” and the other is only there because he feels pressured or wants to manage his image with the counselor.

When an abusive/destructive person goes to joint marital counseling it’s usually because he was pressured to do so by his spouse, by a pastor, or by painful consequences. He goes reluctantly, not with the idea of working on anything for himself, but to blame his spouse and get the counselor to see what a great guy he is and how wrong or crazy his wife is.

There are no perfect relationships and so all marriages have issues. But what often happens is the one who has been deceitful, abusive, or cheated, is not truthful, or blames his spouse for his poor choices.  “She makes me so mad.” “She triggers me.”  “She pushes my buttons.”  “She’s a cold fish in the bedroom.” Meaning, it’s her fault that I do what I do.

The abuser is not in counseling to do his own work or address his own sinful choices or attitudes. He deflects the responsibility to her.  She’s to be the perfect wife who never disappoints him, never frustrates him, never says no to him. He lies about what he does or if he admits it, it’s always her fault.

It gives her false hope that if she works on these things, he won’t continue to harm her. That’s not true, because she isn’t in charge of him, he is.

It colludes with his belief that she’s the one who makes him act out and he doesn’t have to take responsibility for his own issues.

By admitting and working on her own things in front of him, she gives him more ammo to accuse and attack her at home.  That only causes more pain and harm to her and their marriage.

3. Marriage counseling is designed to be neutral. The counselor does not take sides.

Many individuals in destructive relationships hoped that the marriage counselor would be their advocate. Hoped that he/she would name the abusive and destructive behaviors out loud, or confront the sinful attitudes. But that’s usually not the case.

Marriage counselors are not supposed to take sides. They are supposed to advocate for the marriage and not for the individuals in the marriage. This makes it tricky when a wife wants to set boundaries, is tired of being forbearing and ignored and the husband is wanting the marriage to “go back to normal.” She is often labeled as the hard-hearted, unforgiving, unrepentant spouse while the chronic abuser, or cheater, or liar, seems to be the repentant one.

As I say in my book, The Emotionally Destructive Marriage, “When there is no safety and no sanity joint counseling is ineffective and often dangerous. If a destructive partner can’t see his part or take responsibility for his own wrong thinking, beliefs, or attitudes, everything ends up being the wife’s fault and her responsibility.”

Their old history keeps repeating itself, even in the counselor’s office which leaves a wife feeling hopeless that her spouse can change and hopeless that their counselor truly understands their problem.

Marriage counseling can be effective once the destructive individual in the marriage has done his own personal work of self-awareness, repentance, and empathy for the pain he has caused his spouse. The betrayed and hurt spouse must also do her own work to get stronger, reclaim her voice, and define what’s okay and not okay with her. Once that is in place, then and only then is it possible for them to communicate safely and constructively to explore whether or not marital trust can be repaired and rebuilt.

Friends, share what your experience of marriage counseling has been.

Morning friends, This week I am in Texas with a group of lovely women ministry leaders. We’ve been coming to this place for about 8 years to refresh, recharge, exercise, and encourage one another. I’m blessed to have a group of women who know the pressures and responsibilities of ministry who can speak words of…

Morning friends, Thanks so much for your support this week. Prayers are also much appreciated. We are in a battle, not only against evil and dark places where abusive individuals lurk, but also in a battle to help those who are blind but well-intentioned to see the evil of abuse in “Christian” homes.   Abuse is going…

I’m In A Destructive Relationship With Myself