I Have No Say. What Are My Next Steps?

I’m back at my home near Phoenix, and it’s pizza oven hot. Temperatures yesterday hovered around 115. But it’s been a nice change, and I got a chance to walk my 10,000 steps yesterday in our community pool, which has a walking track right in the water. I also got to visit with my granddaughters, which is always fun. Thanks for your prayers. Feeling a little lighter this week. 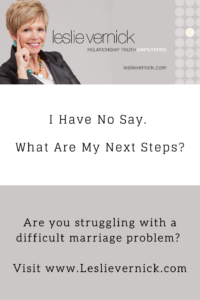 Today’s Question: It took me many years to know (almost) for sure that my husband is emotionally abusive. At the beginning of our relationship, it seemed like a fairy tale. I wanted to make him happy. I catered to his every need. I do want to add that I was not a Christian when we met. I would look for love any way I could get it and thought that usually meant through sex and being servant-like to guys.

So my husband seemed terrific and made me feel secure at first. But soon, that all changed. I was a stay at home mom, and he took control of all the money. He would not give me money to do laundry at the laundry mat. He had to come with me to the grocery store. He refused to pay the bills but bought himself whatever he wanted.

Once I became a Christian, a light went on in my head. I was worth something. We have been married for 16 years and have two boys. My oldest son wants me to leave. He says, “mom, he treats you (us) terrible.”

I feel like I am crazy one minute, and then the next minute, I know that it’s emotional abuse.

This morning my husband said, “You seem to think I lie to you all the time when I have never lied to you.” He can seem so calm and in control at times and so out of control others. He will not listen to me, and when I comment about his behavior or something he said, he tells me, “That’s ridiculous.” Or “You don’t know what you’re talking about.”

Answer: It feels crazy, doesn’t it? My heart goes out to you and anyone else who lives this way. This doesn’t sound like a healthy marriage but more like a POW camp. But here’s the deal. Nothing will change if nothing changes. That means that if you want something to be different, you will need to initiate some changes. Why? Because the way it is right now is not only toxic for you and your boys, but believe it or not, it’s destructive for your husband as well.

First, it’s important for you to get some good Christian support. When we are isolated, the words of an abusive person ring truer than when we have other voices to listen to. A while back, I read Unbroken: A World War II Story of Survival, Resilience, and Redemption. “Unbroken” is the true story of Louis Zamperini, an Olympic runner who was a prisoner of war during WW2. Isolation was one of the tactics used by the Japanese to mentally and emotionally break the soldiers down. When they weren’t allowed to communicate with their fellow prisoners of war and receive support, comfort, and validation, many of them couldn’t stay strong, hopeful, and even sane.

But another important thing I realized as I read this book is that the Japanese soldiers who treated American prisoners inhumanly didn’t feel good either. Lording over someone and being cruel doesn’t only dehumanize and degrade the victim, it dehumanizes and degrades the person doing the abuse. For the best interests of everyone in your family, it’s time to initiate some changes.

There is a tremendous imbalance of power and control in your home. From what you describe, your husband has all the power and control, you have none. You indeed are the slave. He controls the finances and the mood of the home. He controls what you do, where you go, and even tries to control what you think and how you feel. That’s why you are constantly questioning your own thoughts and feelings. Ask yourself, “Am I crazy?” For example, when he twists reality (saying, “I’ve never lied to you”), but your gut and experience tells you something very different. He tells you that you are too sensitive and are not seeing things correctly. That’s called gaslighting, and it’s crazy-making. This pattern is not God’s best for you or him.

On my website’s free resource page, there is an article called, Who Has The Final Say? God’s design for marriage is to be a partnership, not a dictatorship. When you became a Christian, you began to experience your true value and worth. Now it’s time to learn to live as if those things are true. Click here to read the article Who Has The Final Say?

When you know and believe that you are a loved, valuable, worthwhile human being, and live from that core place, toxic people lose their power to manipulate you. They can’t control and intimidate you as they once did when you felt worthless, dependent, and needy.

From this new place, you have some tough choices to make. If you feel safe, your first steps could be to initiate some needed changes and see what happens. Don’t talk about your feelings, which you know he already invalidates and minimizes. Instead, talk about a specific change you want to see happen. For example, you might say, “It’s not okay with me that you treat me like a child, and I have no say financially. I’d like to be treated as an equal partner.” That means…..”I want to have access to our bank account,” or that means…. “I will apply for a credit card in my name to pay for things”…or whatever small step you feel absolutely ready to follow through with.

If he refuses, don’t beg, plead, or badger or argue. Observe. Step back from the relationship because he’s telling you he doesn’t want a partner as a spouse. He’s also telling you that it doesn’t matter how you feel or what you want. Only his needs/wants count, and he wants a slave/servant for a wife. Pay attention to what happens next as you respond, “I don’t want to be that.” Does he get more controlling? Meaner? Does he withdraw and sulk?

If you still feel safe, you might also ask him a question to see if he’s willing and capable of being self-reflective. When the time is right (not late at night, not after a fight, not when he’s hungry or distracted), ask him, “What is the single most important thing you want to be as a husband and father?”

They get caught in their own internal lies, shame, and self-hatred over their inadequacies and failures (real and imagined) and usually do not know God’s forgiveness or the way out and are too proud to humble themselves and admit it. Remember that it does not excuse anyone’s mean and controlling behaviors. Still, it may help you feel less crazy and enable you to explore some compassion (versus resentment) toward him as you speak up and invite him to treat you and the children differently.

If he answers that question with a positive core value, such as “I want to be a loving person,” then the next time he is disrespectful, abusive, or controlling, lovingly but firmly invite him to live up to his core values (if that’s what they are) and treat you and your children from the person he said he wants to be, not how he feels in the moment. If he refuses (which he very well might do), then he not only loses the opportunity to grow as a husband and father, he loses the closeness and fellowship of his family. Unfortunately, sometimes consequences, including separation, are the only things that will wake an abusive person up enough to begin to see the need to change.

Remember, just because someone wants to change, doesn’t mean they will change. And if your husband displays consistent traits on what is called the Dark Triad, or is diagnosed as such (Narcissistic, Machiavellianism (deceitful and exploitative) and Psychopathy (callous and cynical), there will not be any change. You will not impact him nor influence him at all. Instead, you will continue to feel crazy and scared. This personality type’s core values aren’t positive or altruistic. They aim to win, dominate, control, exploit, and take as much as they can with as little consequences as possible.

For some, it’s tempting to move straight from awareness of abuse to separation or divorce, and sometimes that’s exactly the right next step. For others, their conscience won’t let them take that big of a step forward without first making some effort to invite their spouse to genuine repentance and healthy change.

But to do this wisely and safely, you will need the support of others to help you on this journey. There is no short cut to your own growth and healing, but it is God’s will that you mature and live in the truth of who He is and who you are in Him. It’s also His will that you and your children are safe from harm as much as it depends on you. Click To Tweet

Press on, dear one. For your growth, for the benefit of your husband and the future of your boys and family, take these next courageous steps and see what God does.

Friends, what helped you know for sure when it was time to separate from your destructive spouse?

My Wife’s Overreacting Because Of Her Childhood

Morning friends, I’m sitting outside on my deck at 8 am, and it’s simply glorious. The sunlight is sparkling, the air is clean and warm, and this is definitely my happy place, especially early when it’s quiet. I hope you take the time to be in God’s creation regularly. I’m reminded of Psalm 23,…

What Can I Do To Save My Marriage?

Morning friends,   Thanks for all your kind responses last week. Most of us have some trouble creating a new normal to our daily routines and rhythms. This is expected during the crisis, but our body and mind feel it. You may feel disoriented, disorganized, and distracted. It’s hard to focus. It’s challenging to get things…