Am I Judging Or Discerning?

It’s been a tough week. Thanks for your prayers. Two dear friends have COVID-19 and feeling pretty flu-ish. I tested negative (as I had been in contact with both of them) but have been staying home pretty much for the two-week period of waiting time, which is almost over. It’s raining A LOT and I could use some sunshine. Appreciate your prayers. 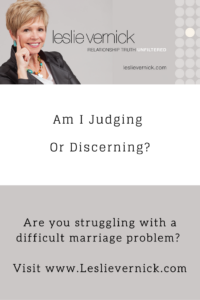 This Week’s Question: For almost 19 years I’ve lived under a financial and emotionally destructive spouse. The mistreatment and humiliation towards me was practiced by my husband in many ways. During these almost 19 years I tried to get out of this destructive relationship three times in a very clear way, but he would always “show” to be repentant when I would take bold steps to get away from him.

The Christian community around us would always encourage me to give him a chance. I regretted the three times in the past I fell for it. It took me all these years to have a clear perspective of my situation and accept that I probably would have to go through a process of putting boundaries that would change everything, alone or with a lot of criticism around me.

A month ago I finally was able to find a lawyer (a Christian) who heard my case and accepted me to pay him as I could for his services to file for divorce. Prior to my finding a lawyer my husband was behaving against me worse than ever. The abuse escalated to verbal and constant humiliation. All of these in front of our three daughters. When he found out I finally got a lawyer, he got very upset (furious). Then after a week of processing it, he again tried to show that this time my bolder step got him to realized how bad he has been living his life. For the first time, he actually called his sins by name, at least as much as I could confront him with. And asked for forgiveness to me and our daughters.

The problem is, none of my daughters believe him. I’ve been hurt so much and for so long and fell for his apparent repentance before that, but now I am firm and will continue my decision until is over. He is now behaving as I always wanted him to behave but I don’t believe him. But yes sometimes a little bit of doubt comes to my heart: why is this time true?

Am I judging him by not believing his recent repentance? I have also lost all feelings for him as the pain I endured covered my feelings for him as a husband. I was seeing him as an enemy that I had without knowing why he decided to be my enemy. I know I have always had good discernment. Many times I won’t listen to my discernment doubting myself and then regretted not listening.

But how can I know that I shouldn’t believe him this time because of my discernment or because of resentment? I simply don’t believe him and I am ready to start a new life where my daughters and I can find healing. I believe if he repented for real as he says this time crying and clearly under stress, he would accept the consequences of his actions.

Am I judging or am I being correctly discerning?

Answer: Two things are really important here. One is that you are asking yourself important self-reflection questions. Am I judging or discerning? Am I wrong in not believing him? Is my resentment getting in the way?

So right now, you don’t know for sure where he is. Only God knows. All you know is your history with him which has shown a repeated pattern of destructive behaviors, humiliation, and financial abuse with no real change in spite of him being nice at times.

And this is where it’s important for any victim of abuse to be discerning. Most abusive people are not mean and nasty all of the time. They do know how to be nice (when they want to or when it serves them). Don’t confuse being nice with being repentant or changed. And….it seems to me the pattern is when he fears losing something – you, his family, his money through a divorce, repentance seems like a handy way to reel you back in so he doesn’t suffer.

But that is not Biblical repentance. That is manipulation under a cloak of religious talk. Your gut is telling you if there is true repentance, he would be willing to accept the consequences of his abusive actions. You’re right. A repentant sinner says to God, “I deserve hell, thank you so much for forgiving me.” Not “I’m repentant so you better not send me to hell.”

A repentant person makes no demands on the one he or she has sinned against. A repentant person changes his or her sinful behaviors, makes amends to those he/she has harmed and is grateful that you forgive, without requirements to lessen or mitigate the consequences of their sin.  Click To Tweet

Therefore, I’d encourage you to suspend your decision on whether he is truly repentant or not. Simply say to him, “I truly hope you are this time, but the consequences of your past claims of repentance as well as your continued sinful behavior are that I don’t believe you and cannot trust you. Your repentance now is between you and God but I will see it come out in the way you handle yourself with our children and through our divorce.”  Then see what happens. The fruit will show itself pretty clearly when you don’t give in, and his idols of control over you and money are threatened.

Stay strong and get support so that you and your daughters can heal and be safe.

Friends, what do you see as the difference between discerning and judging?

Grieving in the Holiday Season

Merry Christmas Friends, Are you all ready for Christmas? Is the tree up and decorated, stockings hung, cookies baked, gifts bought, cards signed and sent, and presents all wrapped? I didn’t think so. But if there is such a person out there who has all this done, please share your magic secrets with the rest…

How Do I Center Myself In God?

Morning friends,  If you’ve been praying for me, thank you. I’ve had a whirlwind month of speaking and traveling and I’m pretty wiped out. I’m home for the next two weeks and looking forward to getting my paperwork cleaned up. Have you gone paperless? If so, what did you do first? What scanner did you…

Topic: The Gift of Truth

Good Monday Friends, Today is your last opportunity to sign up for a free 1 year subscription to WHOA, a new Christian women’s magazine that is filled with great stories of real women who listened to God, featured articles on living a godly life in a secular world, and lots of great tips from cooking…