My Husband Won’t Let Me See My Daughter 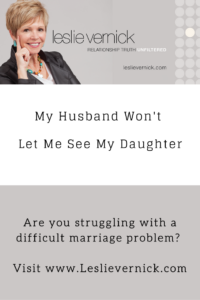 A Biblical Response to Domestic Violence

Happy Columbus Day, This past weekend I attended my 40th High School reunion. I can hardly believe I am this old to have graduated 40 years ago. I loved seeing everyone again, finding old friends, making new ones. We danced the night away but I forgot I’m not 18 anymore. I strained my ankle trying…

Do I Have The Right to Cut Off Sex

Morning friend, I’m heading out West this week to visit my three favorite little girls who just can’t wait to see their Nana and Pop-pop. We will be babysitting for the first time for a few nights while their parents get a much-needed break. Pray for us and them. They’ve never stayed with us for…

Morning friends, So good to be back with you this week. Thank you, Dawn, for your thoughtful and helpful posts on alignment. So important. When we are misaligned, our entire gait is off and we cannot walk in CORE strength or in God’s truth. I want to give you an early head’s up that my…