The Difference Between Judging And Discerning

I'm up at our little cabin in the White Tank Mountains of Arizona. It's an entirely different world than Phoenix up here. It's rustic, green and reminds me of a lot of Northern Michigan or Minnesota. My granddaughters are here for the next few weeks, so we are having fun planting flowers, reading Anne of Green Gables, and doing our artwork. The restaurants are starting to open once again, and I am anxious to get my summer pedicure. I know not all States are opening at the same rate, and ours isn't fully operational, but it feels a little bit more like usual. 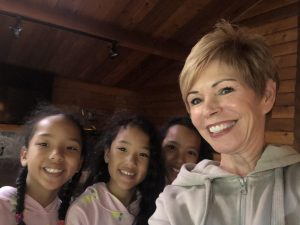 Question: You talk about putting consequences in place not to enable one's spouse. You teach about not repaying evil for evil. I try very hard not to respond negatively.

Also, I examine myself to see if I am becoming bitter, which I don't think I am. But I find myself wanting God to judge my spouse for what he does. Is this wrong (Biblically)? In several verses in Psalms, we see the psalmist praying for justice and punishment.

Answer: This is a tricky question because I think you struggle with what we all struggle with when we are wronged. I am so glad that you are aware that you are tempted to respond with more evil, but you don't want to. And you are also examining yourself for roots of bitterness which you know give the devil a foothold. But you also long for justice.

So let's first focus on the idea of judging because I think that's the lynchpin of your concern.

God is the only true judge because he is the only one who fully sees someone's heart. Biblically I see nothing unbiblical about praying for God's justice, punishment, or even just judgment on someone.  Click To Tweet

The tricky part comes when we act as if we are the judge. That's where I think we get into the unbiblical territory. In some ways, we are called to judge a believer by his or her fruit. We are not to simply believe someone's words if his or her actions are inconsistent with those words, but I would use the term discernment more than a judge in these cases.

In my anger, I yelled, “Jerk.” Thankfully he could not hear me, but in that moment I judged him as a jerk. I judged him as an inconsiderate, selfish person. The Holy Spirit convicted me that my judgment was sinful. It was a condemning statement, not a statement about the truth. The truth was he took the spot I had been waiting for. I don't know why he did that. I didn't need to whitewash the truth of those facts. But the problem was I condemned his motives and actions as if I knew why he did it or as if I had never been guilty of selfish, inconsiderate acts myself. I acted like I was the righteous one judging the sinner. I think that's what God warns us against. That is not our place. We are not qualified to be the judge or condemner of another.

But I don't think we are qualified to judge someone's motives or condemn them as if we are not guilty of sin, even if they are different sins. The prodigal son was guilty of lascivious living, but his older brother was also guilty of self-righteousness and hard-heartedness. But it was the older brother who judged the younger because he acted as if the younger brother's sins were terrible and that he wasn't guilty of any sin himself.

That was not true, but in our self-righteousness, we can feel like that's true. Only God has the right to judge.

Friends, what do you think about this idea of judging? How do you handle the difference between naming sin for what it is, both in your life or in someone else's life without being superior, haughty, or judgmental?

Can I Honor God Even If I Disobey My Spouse?

Morning friends, I hope you were able to have a good Thanksgiving even if you celebrated with just you and God. Holidays always bring their own stress, but with the virus on the upswing in many states, it can create even more dilemmas with having boundaries and learning to speak up for yourself.   Our free…

What Scripture Supports Separation from a Destructive Spouse?

Morning friends, I hope you have been finding the weekly video’s that I’ve been posting on my home page helpful as you navigate through emotionally destructive marriages. This week I’m talking about misunderstandings on headship and submission that can lead to a mindset of entitlement and excusing abuse. I would appreciate your prayers as I…