When Do I Give Up Hope He Will Change?

I have had a crazy and hard week. Pray for me to use my time wisely and to take good care of myself. Lots to do, not enough time to do it well. So pray I know what to say No to so that I am free to say Yes to the important. 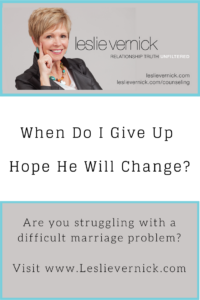 That was 6 years ago. I am unhappily married now for about four years. Separated 9 months ago. My husband is a doctor and was a pastor (stepped down last year). He has a temper, and is verbally abusive. We have been in counseling since 2014.

Last year, I felt unsafe and prayed and spoke to the counselors and we separated. It is hard as people tell me, “Just get divorced. You cannot stay separated forever he might never change. You are young you can start over.” etc.

He says I’m deserting him and suggests it is grounds for divorce.

Here is my dilemma. I struggle to keep hope alive as nothing seems to change and my family is concerned for my safety and don't quite understand why I’m still in this. Please comment on how to keep hope alive if no change is evident.

I know to pray and read the Bible, but I am emotionally finding it harder and harder to be positive.

Answer: I’m sure you do struggle to keep hope alive in the face of mounting evidence that your husband is not changing. I also don’t hear anything in your letter that says he is aware he needs to change. In this blog and other places I’ve repeatedly said, you can’t change something unless you see it needs to change.

Let me ask you a question. Why do you need to keep hope alive? Where is the pressure to stay positive about your marriage or about him coming from? From you? From him? From your counselors? Wouldn’t it be more Biblical to be truthful than to be falsely positive?

Let me ask you a question. What are you hoping for? Are you hoping that God will miraculously make your husband humble himself and admit his sinful ways so that he can repent?

I don’t know anywhere in Scripture where God forces someone to repent or even to see what he will not see. That is always a person’s choice. Jesus couldn’t get Judas or the Pharisees to repent. Even when God orchestrates painful circumstances in someone’s life like he did for Israel in the Old Testament or Pharaoh when he wanted him to let the Jews leave Egypt, their change was not permanent. It only lasted long enough until the painful consequences subsided.

Also, you mentioned that he’s accusing you of desertion, which he claims is grounds for divorce. It seems like he has no awareness of the pain and fear he’s caused you. It appears that he believes that you owe him unconditional devotion and loyalty as a wife, regardless of how he behaves. Is that true?

Protesting, they usually say something like, “I know that it is Gods will for our marriage to be restored. He can change my spouse and God hates divorce. So I will wait, and pray and believe and hope that my spouse will change someday.”

Giving up means you don’t trust what God is doing. I don’t hear that in your question. Letting go and surrendering to God is different than giving up. Letting go says, “Not my will but yours be done.” Jesus showed us this in the garden when he didn’t feel like going to the cross, it was painful, yet he trusted his Father and surrendered.

Perhaps what you need to let go of is your hope in what God will do in your husband. Henry Cloud has a great chapter in his book Necessary Endings called Hoping Versus Wishing: The Difference Between What’s Worth Fixing and What Should End.

Do I want this same level of performance a year from now?
Do I want to be having these same conversations two years from now?

What reason is there to have hope that tomorrow is going to be different? (The best predictor of future behavior is past behavior)
What in this picture is changing that I can believe in?

The first component of CORE strength is to live in truth and to stop pretending. I don’t have hope that God will enable me to fly if I jump out of the window. Could God perform a miracle and enable me to fly? Yes, he could, but will he defy his own laws of gravity? He might, but it’s not something I am going to hope for or test. That would not be living in the truth of what I know and how God acts. Click To Tweet

In the same way, there is no evidence in Scripture that God changes people without their consent and cooperation. Therefore, to hope that he will, is not living wisely. But to hope that God will work in you through the painful process of letting go is living in truth. From that place, you can regain your energy and stay positive for God's promises. He will cause all things to work together for OUR GOOD, which is to be conformed to the likeness of Christ (Romans 8:28,29), and we can hope in that truth.

Friends, what helped you to let go of hope without giving up that God was good and still at work, even if the outcome didn’t turn out the way you wanted it to?

Morning friends, Sorry I’m late with this blog.  It’s been that kind of week. You know what I’m talking about.  I got a new computer and I’m on a steep learning curve.  Yes, I’ve finally converted to MAC.  December is the month I’ve committed to learning this before I start traveling again in January. I’ve…

How can I know if I am Depressed?

Q. I’ve been reading your blog about depression but how do I know if I’m really depressed or just in a bad mood? Crystal in AL A. For many of us, depression is a generic word we use to describe how we feel when we’re down in the dumps, stressed-out, overwhelmed, hurt, or sad. Many…

Good Monday friends, I have some exciting news to share with you. I have been invited to be a regular blogger (2 x a month) for the Association of Biblical Counselors. I am going to be blogging about the same topics that I’ve addressed in this blog for years, but gearing it toward counselors and…