Do I Have To Do Everything My Church Leaders Say?

I hope you had a great Labor Day Weekend. My grandkids were visiting and it’s always so fun to have them here. We watched the movie, Marry Poppins Returns and enjoyed it a lot. If you haven’t seen it and have kids or grandkids, be sure to watch it together.  There is a bad guy who masquerades as a good guy, and that makes for an interesting discussion with children. 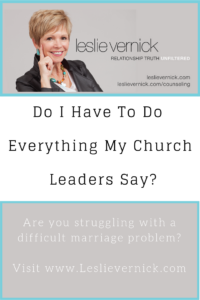 Today’s Question: I want to thank you for all that you do. For having the courage to stand and speak about emotional abuse in the marriage and its affects. You have been my beacon and I know now that I'm not crazy. It took me 20 years to realize my marriage was not a healthy marriage and that I couldn't do anything to change my ex-husband.

As a Pastor's wife I was taught he was the head of the house and I had to submit to all his needs. My needs weren't important, my duty was to serve him as a loving wife. There is a lot more to my story that would probably shock some people if they heard it.

I have a Pentecostal background and everything is sin in their eyes. I can't have non- Christian friends. I can't go to family weddings if they’re not Christians. I can't go anywhere if the place has secular music or doesn't relate to Christian activity. Is that right? I'm not going to go to a bar or a strip club.

I was taught not to listen to secular music so if it's not a Christian artist and I listen to it, I’ve been taught that God is offended. I can't wear shorts, jean's, jewelry, and so on. Can you please help me understand what the Bible says about all this?

I have been separated from my spouse for 8 months now and I want to move on with my life but want to do it the right way in Gods eyes. I don't have any Christian friends since he was the Pastor and I am the one with the problem as far as they're concerned. I do have some non-Christian friends that have supported me throughout this time.

Answer: Your question is tricky because people have differing convictions on what they see the Bible teaches as right and wrong, sinful and permissible. I don’t believe it’s my place to tell you what your beliefs or convictions should be regarding what’s allowed or not allowed unless the Bible is crystal clear like it is with adultery, abuse, deceit, hatred, bitterness, unforgiveness, revenge, the misuse of power, and harming others.

However, things like hair length for men or women, whether a person should wear pants or shorts or jewelry or makeup, or attend movies, or listen to secular music isn’t as definitively spelled out in the Bible.

In addition, some instructions that applied in Biblical culture, might not apply in the same way today. For example, Paul tells slave owners to treat their slaves with dignity and respect but does that mean that Paul and the Bible endorse the practice of slavery? Or was Paul specifically speaking into a culture where slavery was acceptable but with a radically new perspective? God knew that cultural paradigms don’t change overnight, yet Paul’s words about how to treat slaves was a 180-degree departure from the cultural norms of his day (See Galatians 3:28, Ephesians 6:9; Colossians 4:1).

Believers in Biblical times also had similar questions on what was acceptable and not acceptable to do. For example, they wondered should they hang out with unbelievers? Or asked Paul if eating meat offered to idols is acceptable? And argued whether or not non-Jewish converts to Christianity should also get circumcised as proscribed by Jewish law.

You’re already beginning to question what you have learned in your particular denomination about your role as a godly wife. You indicate that you were taught that your primary function was to meet all of your husband’s needs/wants without concern for your own well-being. You seem to think differently now since you are separated and say you are no longer willing to quietly and willingly play that role.

You asked me if I could help you understand what the Bible says about all of this but let me ask you a question. Have you read through the Bible yourself to examine what the Bible says about all of this? For example, here are some passages that speak about who we are to associate with. Does the Bible really say that you can’t attend a wedding that is non-Christian? Read for example 1 Corinthians 5. However, the Bible is also clear that the company you keep influences you. See for example, 2 Corinthians 6:14-16, Romans 16:17, 2 John 1:10-11, Proverbs 13:20-21; Proverbs 24:1-2, Proverbs, 26:4-5. Now, what do you hear God saying to you about who you regularly hang out with?

Sometimes I find people, especially Christian women have become overly dependent on others to do their thinking for them instead of them learning to think for themselves.  I’m not going to do that here for you.

Before the Bible became readily available to the average person to read for herself, religious leaders could make it say whatever they wanted it to say and we would be none the wiser. We trusted what they said about what the Bible said was true, even if it was twisted, distorted or plain untrue.

Friend, God has given you a mind and the freedom to read through the Scriptures for yourself. He’s also given you the Holy Spirit who promises to guide you into all truth (John 16:13). Click To Tweet

It seems like in the past you’ve been seen God as a cosmic policeman and that your favor with him rests on you making sure you follow the right rules and regulations. That reminds me of the legalism of the Pharisees that Jesus spoke so strongly against.

The Bible is not a rule book or even instruction book but rather a story of who God is and how he has reached out to his broken creation through the love of Christ redeeming a fallen world. If we could have kept the law, there would have been no need for Christ to die on the cross (Galatians 2:21).

If you don’t correctly grasp who God is, then the Bible quickly deteriorates into a legalistic power struggle defining who’s in and who’s out, who’s good and who’s bad, who’s right and who’s wrong.

So, friend, you’ve grown up in a very controlling, authoritative church that has not allowed you the freedom to think through the application of the Biblical narrative and how to apply God’s wisdom in your life. You’ve already seen the trouble it got you into in your marriage and I believe God is inviting you to get to know him in a new way. Try taking this next year to read the Bible slowly. Get to know who God is and talk with him about how he calls you to live your life so that you might do the most good and give him the most glory in these next steps forward.

When we listen to Jesus’ words about what’s most important, it’s not the legalistic rules the religious leaders taught, but something entirely new. That’s why Jesus said that the good news could not be contained in the old wineskins (Matthew 9:16,17).

I won’t tell you what to think or believe about these areas of personal conviction, but I do invite you to read the Bible for yourself, talk to God as his beloved daughter and obey what the Holy Spirit puts on your heart to do. Take action steps that reflect the person you believe God’s calling you to be and he will make your path straight (Psalm 32:8).

Friends, if you grew up or attended a church that has a lot of “rules” to obey in order to stay in good standing with God, how did you learn to listen to the Holy Spirit and think for yourself?

Morning friend, Thanks for your prayers for my parents. They are doing a little better and able to manage somewhat better. It’s hard watching those you love struggle and be in pain. We are in the middle of our Moving Beyond Challenge week and it’s amazing. We’re seeing real breakthroughs from stuck to free. If…

Topic: What do you want said at your funeral?

Evening friends, Last week I was in California visiting with my precious grandbaby. We went to Disney Land to celebrate her first birthday. It was cold, but thankfully didn’t rain (it rained the rest of the week). But over the past two weeks I’ve been pondering something. What do you want said about you at…

What’s my next step?

Morning friends, This is one hectic week. Please pray for me that I am grounded and centered in His will as I scurry around trying to get everything I need to get done.   I thought this week’s question was an appropriate follow up to our discussion from last week.   Question: Your last blog post…