I’m heading to Chicago to spend some time with my parents and family for a few days before going to Canada for some meetings. But I want to invite you to a very special FB Live tomorrow (Thursday, August 15) at noon ET with my guest Mary DeMuth. Mary’s a prolific author and has just released her newest book, We Too, How the Church Can Respond Redemptively to the Sexual Abuse Crisis. In our interview we will specifically be talking about the ugly reality of marital rape and the church’s failure to help a wife who has been violated within her own marriage.

To get to my professional FB page to watch the Facebook live go here or later review the recording go here. 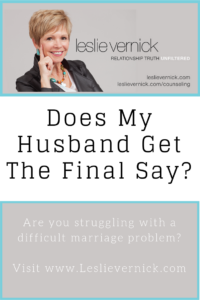 If we look at the original couple, Adam and Eve, before the Fall, there was mutuality to their relationship. In Genesis 1:26,27 God made human beings in his image (both male and female) and gave them both the responsibility to reign over the animals and take care of the earth. Eve was equal with Adam not beneath him.

After they both sinned, part of the curse was that their relationship would change. God told them, “And your desire will be for your husband, but he will rule over you.”  Genesis 3:16 ESV. The desire for power and control over another person would now characterize marriages instead of the mutuality that God originally intended.

We see throughout Paul’s writing a breaking of this “power over people” mentality. He writes, “There is no longer Jew or Gentile, slave or free, male and female. For you are all one in Christ Jesus.” (Galatians 3:28). He also applies this to restoring the mutuality of marriage. He tells husbands to love their wives as Christ loved the church and wives to submit to their husbands out of reverence for Christ (Ephesians 5:21-33, Colossians 3:18,19). It’s both/and, not either/or.

Notice the one spouse gives authority to the other, no one takes authority over the other. When mutuality in marriage is practiced, power struggles may be tempting, but never endorsed or validated as biblical. One person in a marriage should not take another’s choice away from her (or him). When mutuality is practiced and valued, a husband or wife often gives in or submits, but he or she gives in willingly, not under compulsion or in fear.

I have been married for over 42 years. There has never been a time in my marriage where my husband had to have a “final” say showdown. When you practice mutual submission and mutual respect, you listen to each other’s perspective. You defer when someone is wiser than you are in a certain area, you compromise, you work together to come up with a solution that you both can live with.

Finally, let’s look at this question from one other perspective – from the angle of authority. Too often we have misunderstood the authority of a position, whether it be husband, pastor, or elder, to be synonymous with getting one’s own way. In other words, if I am the head of my home (authority), then I get the final say, which means I get my way.

The Bible is very clear that authority does not imply entitlement to one’s own way. God’s Word gives specific instructions to those in authority on how to handle that responsibility. Throughout the Old Testament God often rebuked the leaders of Israel for their self-centered, deceitful, and abusive shepherding of God’s flock (See, for example, Deuteronomy 13; Jeremiah 23:1-4; Ezekiel 34:2-4).

Biblically, God put husbands as the head over their wives (Ephesians 5:23), but that does not put wives at the feet of their husbands.

Women and wives are depicted as equal partners in the Gospel, co-heirs in Christ, co-image bearers of God, and persons to love, not objects to use or property to own. Click To Tweet

Biblical headship is modeled by Christ’s gentle leadership and loving self-sacrifice. Husbands are cautioned not to be harsh with their wives and not to mistreat them, or their prayers will be hindered (Colossians 3:19; 1 Peter 3:7). No godly leader is entitled to make selfish demands, order people around, or hurt them when they fail.

Jesus cautions those in positions of authority – parents, husbands, pastors, and elders – not to misuse those God-ordained positions for self-centered purposes. These roles are given to us by God to humbly serve the individuals or groups that have been entrusted to our care, not to have our egos stroked or to get our own way (Mark 10:42-45).

So what would these biblical principles look like in making family decisions? Let’s say you want to go to the ocean for vacation, but your husband prefers the mountains. Traditionally the final say has meant that he gets to go to the mountains and you simply have to submit.

But biblical headship defined by Christ is described as servanthood. Now we have an entirely different picture. How can your husband best serve your needs? If he is to love you as Christ loves the church and sacrifice himself for that, what would the “final decision” look like?

When this kind of mutual submission, mutual love, and mutual respect are practiced in a marital relationship, there is no need for a “final say by one over the other.”

Friends, what have you been taught about “the Final Say” in marriage?

How Do I Break Free From His Control?

Hi Friends, Thanks for all your responses and comments to the video I posted last week on Fred and Marie. This past Saturday I spoke at a fundraising banquet for an organization called Overcoming Powerlessness which ministers to victims of emotional abuse. I closed by saying, “No epidemic has ever been resolved by paying attention…

I am so excited to announce the launch of my brand new podcast, “Relationship Truth: Unfiltered!” And I want YOU to be among its first listeners.  If you know me you know this isn’t the same “how to have a happy marriage” stuff you’ve heard so many times before. This is real, biblical advice you…