Do I Stay Well Or Leave Well?

It’s a 115 degrees in Phoenix today. Pizza oven hot. I’m grateful for the cool 70’s and regular rain up here in the mountains at our little cabin. It’s almost surreal how different both the climate and terrain is only 4 hours away. No sand. No Serrao cactus. Only beautiful green trees, pine trees, and flowers. If I didn’t know I was in Arizona, I would think I am in Northern Michigan or even my old State of Pennsylvania. Grateful that God allowed us to find this little slice of heaven to escape from the heat. I thought you might like to see how my little puppy Addison is growing. She LOVES it here. 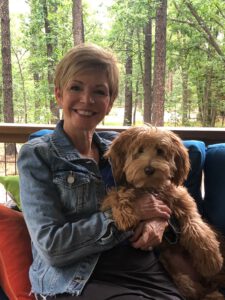 I am starting an Introduction to CORE strength Class soon and it will be held Tuesday, August 13, and 20th on a conference phone line. If you’d like more information on how you can build your own CORE strength, click here.

Today’s Question: In the 24 hours since discovering this site, I’ve read the Destructive Marriage e-book, watched every chapter on YouTube, scoured the blog posts, and read the Nine Tactics of Manipulators PDF… I’m desperate to understand how to restore my situation through any means necessary, but I just don’t know how to stay well or leave well.

Leaving well means establishing a community of support (which will certainly violate his expectations of privacy and respect) so you can do so safely and sanely. But how do you kick out a man who refuses to leave, except on his terms? And how can you walk away from home to leave him to destroy everything of value to you?

But that approach will never lead to peace or true reconciliation or healing of your marriage. You don’t really tell me much about what’s going on in your marriage but you are quite clear that you feel ignored, distained, lectured, and trapped. You don’t know how to stay well or leave well. Either choice will result in some pain and staying and doing nothing is also painful and as you’ve realized, foolish.

Let me take you to that passage in 2 Peter to give you a couple of examples of the balance of good behavior and consequences.

Often in destructive marriages, a spouse who is verbally battered or emotionally neglected or abused can start to lob some verbal bombs of her own. Instead of responding to mistreatment in a way that honors God, she dishonors herself, her husband, and God by her building resentment as well as her explosive or sinful reactions to his abuse.

God tells us that as godly wives, we must choose a different path. Peter encourages us not to pay back evil for evil by reminding us of Jesus, who, when he was reviled, did not revile in return; when he suffered, he did not threaten but continued entrusting himself to him who judges justly.” (1 Peter 2:22,23)

The good Peter is talking about here is a moral good, a doing the right thing kind of good and that often means implementing consequences and/setting boundaries by refusing to go along with immoral or abusive behavior. Although in this passage Peter specifically advises Christians to submit to authority, Peter himself was flogged after he refused to stop preaching about Christ even though he’d been ordered by those in authority to stop. Peter refused to submit because in doing so, he would have to stop doing good (Acts 4:19; 5:17-42).

Her behavior is good. It honors God, protects her children and does what is in the best interest of her spouse. It is never in someone’s best interests to enable sin to flourish.

When a wife takes these brave steps and sets boundaries and implements consequences for her spouses sinful and abusive behavior she will most likely face suffering.

She may suffer financially as her husband sits in jail because she called the police when he hit her. She may suffer the censure from her church when she separates from him because of his unrepentant use of pornography and verbal abuse. She may suffer from loneliness, retaliation from her spouse, disapproval from her friends and family for the stance she’s taken.

That’s exactly the kind of suffering Peter is talking about. He’s speaking about suffering for doing good instead of being passive or fearful or doing the wrong thing or nothing at all.

Peter is saying that when we do what is right (stand up, implement consequences, refuse to go along with wrongdoing) and we get mistreated for it, God sees it and commends us.

As I’ve said repeatedly, we all have choices to make and those choices have consequences.  Click To Tweet

When a husband (or wife) repeatedly chooses to treat his spouse with contempt, abuse, indifference, harshness, cruelty, and deceit, he or she cannot demand or expect the benefits of a good marriage. To do otherwise is to lie and pretend, which is not good.

To not implement consequences for serious sin also reinforces the abusive person’s delusions that he can do as he pleases with no negative impact. It would enable him to stay blind to his sin and colludes with his destructive ways, which is not good for him, for her, or for their family. That kind of passivity does not honor God.

Peter concludes his teaching with these words. “Let those who suffer according to God’s will entrust their souls to a faithful Creator while doing good.” (1 Peter 4:19 ESV)

So, friend, your first step is to tuck your heart and mind in close to God and ask for wisdom and discernment for your next steps. You also need to be crystal clear on your highest values.

You said you fear walking away from a home because you believe he will destroy everything of value to you. I’m not sure here what those valuable things are but your mental, spiritual, physical, and emotional health and that of your children should be your highest values and priorities right now, even if it means a lower standard of living.

Friends, please share the wisdom you’ve gleaned on how to face your fear of the next step forward.

Topic: The Gift of Forgiveness

I am so thankful for you. I want to ask you to do something for me. Pray. I am beginning to write my new book, The Emotionally Destructive Marriage and I am tempted to be overwhelmed and scared (as I always am when God takes me way out of my comfort zone). It will take…

If My Spouse Kills Himself, Will It Be My Fault?

Morning friends, I love you all. I love your heart. I love how you spend so much of your precious time helping one another, sharing your stories, resources and heart with one another. I love that you are humble and confess when you have reacted emotionally or harshly and want to learn to walk in…

Good morning my friends, Coach LeAnne Parsons here! One of the most exciting things I get to do as a follower of Jesus Christ is to partner with the Holy Spirit to accomplish God‘s work here on earth through this ministry as a professional certified coach on the Leslie Vernick Team. I have the privilege…