It’s hard to believe that August is almost here. The older I get the faster time seems to go by. Do you remember as a kid how summer vacation seemed so long? Now it feels like a blink of an eye before winter will be here again. It makes the Scripture more real when it says that our life is like a vapor. All the more reason to live wisely and well.

I’m doing a free webinar on August 5, at noon ET and 7:30 pm ET on Four Lies That Make Woman In Destructive Relationships Feel Crazy And Powerless. Click here to save your seat. 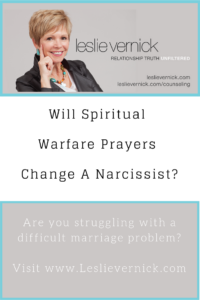 Today’s Question: I was talking to a couple of friends about my husband’s behavior to get advice on how to handle him and they talked about spiritual warfare and the spirit of Jezebel and Ahab. They said that I need to pray until the spirit is cast out. What are your thoughts on that with a spouse who has narcissistic tendencies?

A little background: Currently he goes to Celebrate Recovery, and there are some outward changes but not much inward changes. He doesn’t yell all the time like he used to but he still has his expectations. For example, he keeps telling me what I have to do and if I do what he wants then he will help me out, but he never holds his end of the bargain because he puts another stipulation on me to meet.

So that’s why I am wondering if there’s really any correlation to spiritual warfare and a narcissistic individual. What are your thoughts?

Answer: I have never viewed or described abusive behavior in terms of specific demonic spirits or spiritual warfare such as a Jezebel or Ahab spirit.

The last portion of Romans 1 describes individuals who continually reject God’s truth. The more he or she does that, the more he or she becomes corrupt and deformed, both in their brain formation as well as their character habits, outlook, and behaviors.

Scripture also describes these people as evil or wicked in numerous places throughout the Old and New Testament.

Paul writes to Timothy warning him of such individuals.  He says, “For people will love only themselves and their money. They will be boastful and proud, scoffing at God, disobedient to their parents, and ungrateful. They will consider nothing sacred. They will be unloving and unforgiving; they will slander others and have no self-control. They will be cruel and hate what is good. They will betray their friends, be reckless, be puffed up with pride, and love pleasure rather than God. They will act religious, but they will reject the power that could make them godly. Stay away from people like that.” Later on, he refers to specific people who display those traits as, “They have depraved minds and a counterfeit faith.” (2 Timothy 3:2-5; 8)

Paul never describes these individuals as having demonic spirits that we must cast out, but rather as destructive individuals we must avoid and not allow to influence us.

However, let me explain what most see as an Ahab and Jezebel spirit and unpack perhaps what your friends meant to communicate.

We all know the story of the prophet Elijah, challenging the worshippers of Baal to a contest to see if the god of Baal could compete with the God of Israel. And the God of Israel won. But to Elijah’s dismay, Ahab, and Jezebel did not repent or change, they only got angrier and more violent and Elijah feared for his life.

After this, Ahab tried to annex some land next to his palace, but the owner wouldn’t sell it to him because it had been his family for years. Ahab was angry and sulked, and Jezebel manipulated a coup where people would falsely accuse the owner of the land of cursing God and the King and then had grounds to stone him to death.

Both Ahab and Jezebel hated God and hated what was good. They used their power over people wickedly and selfishly. Jezebel could be more covert and manipulative but both are unsavory, evil characters, but they are never described as being invaded by a demonic spirit. You can read about them in (1 Kings 16:29 to the end of 1 Kings).

Christian people helpers who ascribe to deliverance ministries often use the language of being possessed by a demonic spirit to describe serious sin problems. The Bible says demons exist and may torment, or even possess some individuals. Jesus cast out demons from individuals who were tormented by them as did some of the disciples.

Therefore, the question is whether or not a narcissistic person is demon-possessed or is he (or she) deformed in character and personhood? I don’t know if we can answer definitively but there may be some of both going on.

But the more important question is this: Is spiritual warfare the solution to the problem of living with an abuser? And is spiritual warfare implemented to change the wicked character of the abuser? Or to ensure the sanity and safety of the victim?

Paul tells us the importance of how we engage in warfare. He says, “We are human, but we don’t wage war as humans do. We use God’s mighty weapons, not worldly weapons, to knock down the strongholds of human reasoning and to destroy false arguments.” (2 Corinthians 10:3)

He also tells us, “Be strong in the Lord and in his mighty power. Put on all of God’s armor so that you will be able to stand firm against ALL strategies of the devil. For we are not fighting against flesh and blood enemies, but against evil rules and authorities of the unseen world, against mighty powers in this dark world and against evil spirits in the heavenly places.” (Ephesians 6:12)

But then Paul goes on and tells us how. The rest of Ephesians 6 talks about putting on our spiritual armor, starting with the belt of truth, and the breastplate of righteousness.

It seems to me that spiritual warfare is primarily defensive, not offensive. This means that you must be vigilant to do your own work to protect yourself against the lies of the enemy. To work to learn how to discern what’s true from what’s false. To develop the muscles to be able to stand in the truth and walk in righteousness and not be influenced or intimidated by a narcissistic, charming, sweet-talking, manipulative, or evil person.

It means you must learn not to fight evil with more evil of your own but instead learn to guard your heart, and walk-in CORE strength. You will pray for yourself and trust God and do what you need to do to stay clear of such individuals for your safety and sanity.

However, it seems from your question that your friends were telling you that if you engage in the right spiritual warfare, your husband will be delivered from his narcissism and destructive ways. This advice reminds me of the “the try harder advice” that many Christian women receive from well-meaning people helpers. That if you only try harder to love more, forgive more, submit more, respect more, admire more, pray more, be more patient and loving, then he will wake up and come to his senses and stop his abusive behaviors. And if he doesn’t, it’s because somehow you failed to try hard enough.

By saying it’s your job to keep praying until the Ahab or Jezebel spirit is cast out of him puts the responsibility for his repentance on you not him. This type of teaching puts a lot of pressure on a woman who has already tried excessively hard to do what she thought needed to be done to make her marriage work, with no changes.

It makes her responsible for whether or not her husband wakes up and changes. If he hasn’t, it’s because she hasn’t followed God enough or done enough or prayed the right prayers enough. That’s false teaching. Jesus didn’t wake Judas up, nor did he change the Pharisees. Was that because Jesus didn’t try hard enough? Or is it because each person is responsible for his or her own thinking, heart, and actions?

Please don’t misunderstand. Prayer is important and I hope you do pray for your spouse to see the truth so that he will submit to God and change. However, God doesn’t change someone who doesn’t want to be changed.

If your husband has no interest or desire to be healed or delivered (whatever term you use), you can pray that his heart changes, but until he desires the change, the change will not happen.

God gives every individual a free will and He honors our no, even when it’s a bad choice. Click To Tweet

I’d encourage you to go back to your friends and ask them exactly what they meant by “You need to pray until he changes.” Does that mean you also need to keep putting up with his abusive behavior while you’re waiting? Ask them to explain in more detail what they think is your responsibility and what is his responsibility? They may be speaking from what they have heard without really reflecting on the implications of what they are saying. On the other hand, they may believe it’s your job to try harder to get him to change. But either way, you will know where they stand and will better be able to discern whether or not they are safe supporters for you as you move forward.

Friends, how do you practice spiritual warfare in reference to dealing with destructive individuals in your life?

No One Believes Me

Morning friend, It’s been a busy few weeks, how about you? One of the things that is crucial to your own mental and emotional well-being is a healthy, loving community. If it’s not happening at home or in your church community, it’s important that you seek it. Online community is better than no community. Grateful…

The Bible Says “Love Always Trusts.” Is It A Sin To Not Trust Him?

Morning Friends, Our CONQUER Conference will be here in just 2 months. It’s hard to believe how wonderfully God is pulling everything together. We have 3 great main speakers plus 16 different workshops for you to attend. Many of the workshops have to do with difficult and destructive relationships so they will continue to help…

Morning friends, I am having a great week here in Arizona with my three loves. We are baking, taking walks, playing games, telling stories, talking and loving each other. They are so darn cute. When I was cooking a turkey breast for Christmas dinner, I opened the oven and my middle granddaughter, Leilani, said “What…