I am back in Phoenix for the week and boy oh boy is it hot. I forgot how hot it can get here. I can walk our dog for about 5 minutes and then we both are seeking shelter. She’s not used to it either. We both miss our long evening walks in the cool mountain air. But I will be heading back to Pinetop in another week. Haircuts and doctor’s appointments are local here, so we have to come back occasionally.

But one highlight. We went to a Hugh Jackman concert last night and it was absolutely the best show I have ever been to. He is a fabulous entertainer and seemed like a genuinely good man. I loved how he honored his wife and marriage right at the beginning of the show. If you get a chance to see him, go. If you loved his movie The Greatest Showman and Les Misérables, you will not be disappointed. 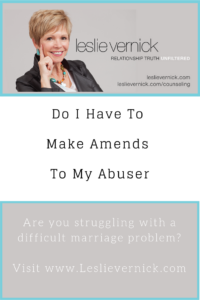 Question: Sometimes I was verbally abusive towards my husband. This came after mountains of neglect, rejection and emotional abuse. I sometimes doubt my reconciling on this matter. I think my response makes sense under my personal circumstances and yet I acknowledge it is my responsibility to amend those “reactions” to the abuse.

I am unsure if this is healthy to do especially with an abuser. In fact, I know it is not a safe idea but in the past, he used these moments as evidence of my weaknesses and it was a weakness, but weakness that came from neglect, rejection, and abuse.

Am I an abuser because I responded to his gaslighting and other tactics with sometimes intensity? Would you consider speaking to this in an upcoming blog post?

Answer: I think you bring up some areas we need to consider and talk through in our blog community. There has been some discussion here about awareness and intent of abusive individuals. Some have said there can be immaturity and a lack of emotional intelligence (EQ) that sometimes leads to people behaving poorly and being afraid of or resisting personal growth.

Others see abusive behavior solely as a tactic to gain control, with an abuser having full knowledge of what he or she is doing. I believe Nancy defined that kind of individual as an evil person with the intent to do harm, where the foolish one might be more ignorant or immature, yet still capable of doing great harm.

You bring in a third category, a caring person who loses control of his or her tongue or temper when repeatedly being oppressed, abused, attacked or gaslighted and neglected. In my interactions with my mother (as I’ve talked about before), I think I had emotional and spiritual immaturity coupled with poor boundaries that allowed me to get so provoked, I would lose it and sometimes lob some verbal bombs back at her, which always left me feeling bad about myself and made only a negative impact on her.

The roots of abusive behaviors might be different, but all these behaviors damage our human dignity and well-being as well as relationships, even if the reasons for doing so seem valid. Click To Tweet

There is an interesting verse in Proverbs that says, “Excuses might be found for a thief who steals because he is starving” (Proverbs 6:30), yet it goes on to say the making of amends and/or restitution for stealing that bread is still required, even if he has to sell everything he owns. Those are strong words and serious consequences, even for someone who has a very understandable reason for stealing.

So to answer your question, yes there might be understandable reasons why we act a certain way, or your spouse acts a certain way. Yet the outcomes can be just as lethal regardless of the reasons. For example, if I drive drunk and end up killing someone, not intending to cause harm, I still do. If I drive reckless, texting while driving, I’m foolish and I don’t intend to cause harm, but I still do. Or I might have road rage because someone provoked me and I plow my car into their car because I’m upset. All cause someone else harm. Three different reasons and intents but the same outcome.

But I’d like to camp out a little more on reason #3. When we are provoked and provoked and provoked and exhausted and hurt and emotionally abused or shamed what are we to do? It’s certainly understandable that we would be tempted to hurl some of our own big rocks back towards the person who is doing us harm, but is that God’s way? Is that how evil is stopped, or does that just continue the evil and darkness to grow, to get stronger and more powerful in our heart, in our home, and in our world?

This past Sunday my pastor gave a sermon on how to handle being unjustly treated. He used the movie Forty Two – The Jackie Robinson Story as an illustration of what Christ meant when he told us to turn the other cheek. In case you haven’t seen it, I’d highly recommend you watch it although it’s not suitable for young children and may cause some triggers. Jackie Robinson was the first African American man to be invited to play baseball in the major leagues. Harrison Ford played the Dodger’s owner who recruited Jackie. He had a heart to heart with him before he signed him on.

He said something to the effect, “I know you can play amazing ball, but can you control your temper?” Because, he knew that Jackie Robinson as the first African American on a major baseball team would suffer from people’s prejudice, racial slurs, verbal abuse, and even threats to his family. Would Jackie be able to show the world that was watching all of this take place something they didn’t expect? Could he show a black man who, when mistreated, even when provoked, didn’t retaliate but overcame that evil with good?

Jackie was a Christian. He knew that his mission wasn’t just about baseball, or defending his honor, it was about a movement. A change God wanted to make in the culture, in humanity and the way people viewed African Americans. Had Jackie retaliated with his own verbal abuse everyone would have understood, but no one would have been impressed. His strength of character showed up by not retaliating but by turning the other cheek and walking away. Continuing to fight for justice and the rights of African American’s to play sports, but not returning abuse to abusers. Today he is still honored and celebrated in baseball by all.

Yes, it’s hard not to let evil, shaming, manipulative, demeaning people get the best of us. But when they do, and we stoop to their level, we become like them instead of showing them and our children and the community that we are NOT like them. You are not an abuser because you have woken up and recognized your wrong and stopped engaging in abusive behaviors. Had you instead justified or excused them, then how are you different from abusers who do their own excusing making?

But your other question was “should I make amends if I know the person will continue to use that against me?” That’s another interesting dilemma. In Alcoholics Anonymous, steps 8 and 9 speak to the importance of amends making in your own recovery and growth. AA says, Step 8: Make a list of all persons you have harmed, and become willing to make amends to them all. Step 9: Make direct amends to such people wherever possible, except when to do so would injure them or others.

This 9th step has an exception. If the amends would do the other person more harm, such as retriggering them if you sexually abused them. Or would harm someone else in his or her life, then don’t make amends directly. But you could still make amends, by donating money to a domestic violence center or a rape crisis center or volunteer your time in helping someone else as amends.

However, your question was, if making amends causes you more harm should you confess wrongdoing or make amends? The verse in Proverbs would indicate that at least sometimes it’s important to make amends even when it costs you to sacrifice financially.

Studies have been done with doctors who have made a mistake in surgery – like cutting off the wrong arm, or with a patient who died during a routine surgery due to some physician error.

They found when doctors went into self-protective mode after their error (I probably will be sued for this so I’m not going to talk to the patient’s family about what I did wrong), they were more likely to be sued.  However, when a doctor was humble and honest, even with his or her mistake, a lawsuit was less likely, but no guarantees.

I understand that an abusive person who does not own his or her own wrongdoing finds great joy in rubbing salt in the wounds of another’s confession. And it may not be safe for you or a former victim to have any contact whatsoever with her abuser.

Therefore, I think this is a question you will have to wrestle through with the Holy Spirit guiding you, without allowing the condemning spirit of Satan make you feel afraid to do it, or not do it. If you make amends, do it for you, not for him.

If he rejects it or makes it ugly, that is on him, but you know that you have done what God called you to do. And if making amends would tempt him to do more evil towards you, then perhaps for his welfare and yours, it’s best to stay away from him and ask God to help you make your amends in a way that is good for all.

Friends, how have you made amends when you know you have caused harm, even if you felt provoked or justified in the moment?

Should I Require My Spouse to Do Things?

Morning friends, I’m excited about the great response we had to the live streaming event, Can Abusers Change, that Chris Moles and I did last week.  If you didn’t get a chance to watch, click here. I’m going to do some more live streaming in the future on various topics and would love to hear…

Q. My mother just died a long and painful death and last year my husband of 30 years walked out on me. I’m struggling as a Christian to believe that God is good when it feels like he doesn’t care and he doesn’t help. How can I get through this period of doubt? Cindy A….

I Don’t Trust My Husband, Should We Be Having Sex?

Hey Friends, I’m heading to Italy this week for a much needed vacation. I’ve never been there before so I’m really looking forward to it. Martha, my assistant will be monitoring the blog while I’m gone. We had an overwhelming response to the launch of my new group CONQUER. If you’re interested in a monthly…