How Can I Implement Consequences When My Husband Is Abusive?

It’s been Nana camp again for this week in July. And it’s been fun. We’re going horseback riding tomorrow but the kids have been having a great time on our backyard zip line. What kid wouldn’t? It’s even fun for the adults, although I will spare you the adult version.

Here’s the kids having a ball.

Thanks for all your amazing support and encouragement to one another on this blog. I wish I could hang out more here but I do try to read most of your comments. This week’s question goes along with our question last week about restitution. 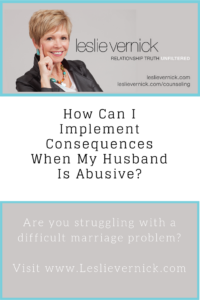 Question: I've read some of your books. I wholeheartedly believe that I deserve to be treated better than I am. This crazy cycle isn't ok and it must stop one way or another. I'm on board with that much.

My trouble is that I need some help thinking creatively about what natural consequences might be. It's easy when it's a little kid. Example:  “You know the rules, until you can respect the furniture and sit on it properly (rather than jumping) you may not use it.  Here… sit on the floor to have your lunch and maybe tomorrow you can use the furniture again properly.”

What do you do with a husband and that crazy cycle?  I can go toe to toe when I have to, but really what I want to do is run far, far away.  In these times, I want nothing but out of this relationship.

I desire to be treated properly, but don't know another reaction other than fight it out (which gets sooooo old) or flee. Those are my two standbys. However, I don't like it (actually it angers me) that I don't know any other reaction.  What actions could I take instead?  Can you give some practical examples of how to dance differently?

Answer: First of all let me commend you that you want to dance differently and you’re not happy with your own “reactions” although fleeing might be perfectly appropriate if you need to.

But let me develop the metaphor of the dance. If you were dancing with someone and he repeatedly stepped on your toes, what would a “natural” consequence be? Especially if you already kindly asked him to be more careful, or to stop dancing that way? If he refused to change his behavior, then you could continue to be a “victim” of his poor dance steps, or you would have to dance differently yourself if you wanted your toes to stop hurting.

Now it’s his turn to make a choice. Either he will stop dancing altogether with you, dance separately, or learn how to dance without stepping on your toes. Meanwhile, he may criticize, scream and/or blame you that you’re just being too sensitive, unreasonable, un-submissive, mean spirited, and sinful because you won’t dance with him like he wants. (This illustrates the entitled mindset at its craziest).

This is where victims of abuse tend to get fuzzy headed and more easily manipulated. You do want a close relationship with your spouse (dance closely). As Christians, we believe that is God’s will and what we promised when we got married. Therefore, we can start to feel guilty pulling away or putting boundaries down on close interaction, especially when our abuser accuses us of wrongdoing. We self-examine, self-reflect and wonder to ourselves if we are too sensitive or too selfish.

So often you try harder and go back to dancing close, but when he steps on your toes again and you can’t take it anymore, you blow up (fight) or run away (flight). This pattern repeats itself again and again as you get lured in or dragged back into the same old dance where your toes keep getting stepped on.

You asked for some practical ways to implement consequences when your husband is abusive toward you. You don’t mention specifically what is happening so I can’t suggest specific strategies for your case but here are some general principles about implementing natural consequences.

It’s important that you not punish your spouse (as a parent might punish a child). That is not your role and it is inappropriate.

Consequences are meant to wake a person up and help him to see more clearly. Click To Tweet

The pain of one’s sin is meant to teach a person not to repeat the same things over and over again. The Scriptures are clear, “what a man sows he reaps” (Galatians 6:7). When a man repeatedly sows discord, abuse, deceit, enmity, strife, and pain in marriage, there are natural consequences. He loses the benefits of a close marriage relationship.

If he didn’t experience that painful consequence and you pretended that all was well between you, that would enable him to stay deceived into thinking that he can act sinfully without suffering any negative consequences. That is not reality, nor loving. Painful consequences have a way of helping a person change his or her sinful ways because he or she doesn’t like or want the PAIN of the consequences.

Unfortunately, I think this is where many Christian wives (and some husbands) have been misadvised by church leaders. Abused spouses have been counseled to show the virtue of long-suffering, sacrificial love, forgiveness and grace while still being abused, lied to, and ignored. Somehow they are supposed to continue to provide the relational and sexual intimacy found in a healthy, loving marriage when that marriage is broken and needs repairs.

This traditional counsel fails on two counts. First, it encourages the victim to lie and pretend to prop up a relationship that is unhealthy, broken, and sinful.   That’s not good for her or for her spouse. The Bible says that love rejoices in the truth. (1 Corinthians 13 ). Second, this counsel fails because as she lies and pretends, it enables the abuser to stay self-deceived into thinking his behavior is not that bad or that it’s her fault he acts that way or that it doesn’t matter how he treats his wife, he’s entitled to the perks of a good marriage because she’s my wife (property), God hates divorce, and therefore she owes me. That is not biblical wisdom, walking in the truth, or healthy reality testing.

The following are some natural consequences you may implement in an abusive relationship.

In addition, here are some things you can say when your spouse starts his tirade. You mentioned that your pattern typically is to either “fight it out or flee”. Instead, try saying one of these phrases and then walk away.

“Just because you think that way doesn’t make it true” or “I’m not going to argue about that”. Or “That wasn’t appropriate or a nice thing to say”, or I don’t deserve to be spoken to that way.”

Please understand. Those statements will not transform your spouse but it will open his eyes a bit to you as a separate person who is not going to allow herself to be bullied, badgered, manipulated and mistreated. As you gain respect for yourself and handle yourself in godly ways, you will exert a powerful influence on your husband and children. And, those are good things.

In closing, here just a few verses from Proverbs that tell us the results and consequences of living with a difficult/destructive person.

22:3 A prudent man foresees evil and hides himself, but the simple pass on and are punished.

22:8 He who sows iniquity will reap sorrow.

23:9 Do not speak in the hearing of a fool, for he will despise the good sense of your words.

23:10 Cast out the scoffer, and contention will leave; yes, strive and reproach will cease.

24:25 “Make no friendship with a man given to anger, nor go with a wrathful man, lest you learn his ways and entangle yourself in a snare.”

Friends, what other kinds of natural consequences have you put in place to stop enabling abusive behaviors to continue.

Question: I struggle greatly with craving female affection and approval, especially romantic and sexual affection. I crave being prized by a woman in those ways. To have that means I am a worthy man. To not have it means I am nothing. I understand that this is idolatry, but I really don’t know how to…

I’m Exhausted Being A Peacekeeper, What’s Next?

Morning friends, I hope you joined my 7 Day Challenge of Moving Beyond ….. So far we talked about moving beyond our negative thinking, moving beyond overwhelm, our fear of failure, bad moods, unrealistic expectations and finally, our last challenge for today (Wednesday) is moving beyond people pleasing.    If you missed this challenge you can…

I Married the Wrong Person. What Do I Do?

Question: My marriage isn’t terrible, but it isn’t great either. I often think I married the wrong person and that I would be happier with someone different. How do I learn to love the person I married instead of always dreaming of what might have been? Answer: Believe it or not, your situation is not…