Is Restitution A Part Of Repentance?

I hope you have something fun planned for July 4th. My 3 granddaughters are coming up for the weekend with their parents. We have installed a zip line and a slackline on our cabin’s property. One more thing we need – a big tire swing. Everything kids love to do.

I’ve been practicing on the slack line. If you don’t know what one is, go here to see.

So far, I can stand on it for 4 seconds without falling off. My goal is by the end of summer to be able to walk across this slack line without holding on. I am going to take a ride down the zip line this weekend. I hope I don’t hurt myself. I’ll post a picture next week. 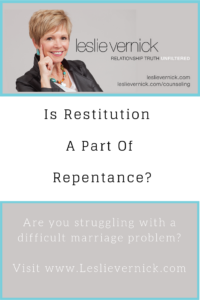 Question: We had a question from last week’s blog regarding restitution. The question went something like this. When someone seriously sins against someone and says he or she is repentant, is restitution required? The writer mentioned Zacchaeus’s spontaneous restitution of monetary damages when he came to Christ as an example of the need for restitution.

Answer: John the Baptist says it best when confronting the religiosity of the Pharisees who had great words but no changed actions. He said, “Prove by the way you live that you have repented of your sin and turned to God.” (Luke 3:8).

Genuine repentance always shows up in changed thinking and behaviors, which if appropriate includes restitution to someone for the damage caused. For example, if I am not paying attention while exiting my driveway and back into my neighbor’s car on the street, if I’m repentant, I don’t just say I’m sorry. Repentance means that I also voluntarily pay for the damages as well as learn to be more careful when backing out of my driveway. Saying sorry would be meaningless without the subsequent changes, especially if I did it over and over again.

When God was establishing guidelines for the Jews to live together in community, he not only gave them the basics of the Ten Commandments, but also detailed guidelines about consequences for wrongdoing and how to make restitution (Read Exodus 21, 22, 23 for examples). He knew that when you caused someone harm, even unintentionally, there needed to be repairs made to the relationship by making restitution for the damages. But notice God’s words in these passages when the injury was on purpose, or due to carelessness, or prior knowledge of the tendency of an animal to be dangerous. Then the consequence was more severe and the restitution more extensive. (Exodus 21:28).

Therefore, what does restitution look like in cases of marital abuse, chronic adultery or other destructive patterns when repentance is genuine? First, it is something that is initiated by the repentant sinner, not demanded by the victim. Justice is demanded by the victim and equally important in some cases. But if we look at Zacchaeus’ example, he volunteered to pay back those he cheated. If I crash into my neighbor’s car and cause damage, I volunteer to pay for the damages. If I refuse or neglect to do that and assume my “sorry” is sufficient, my neighbor could rightly demand justice for those repairs. My neighbor may also need to use the legal authorities or courts to require me to pay for damages. But then my words, “I’m sorry” are meaningless.

When a destructive spouse wakes up and repents from his entitlement mindset and abusive/destructive behaviors, he accepts the consequences of his behaviors without conditions or resentment. Click To Tweet

He understands that he has broken trust and caused damage and if the relationship is to be repaired, he has to demonstrate goodwill and initiate ways to rebuild and repair that trust.

This may not look the same in all situations but let me give you a few examples. I remember one of my clients waking up and realizing that she enabled her second husband to continue to abuse (physically and sexually) her daughter. In her repentance, she confessed to her daughter that she was too weak emotionally and spiritually to leave him at that time and offered to pay for the daughter’s therapy as long as it took for her to heal. The mother could not undo what she (or her husband) did, but she did initiate restitution for her damages by offering to pay for her daughter’s healing. This was not demanded by the daughter but volunteered by the mother. In another example, a woman separated from her abusive husband. He said he was repentant, but showed that by willingly moving out of the house, paying for her therapy, his therapy and all the household bills with no demands for sexual favors or reconciliation and continued this for several years until trust began to be rebuilt.

Therefore, if he shows no initiative in problem-solving or figuring out how to make restitution for damages or repair a broken relationship, his inactions are showing you it’s not that important to him and he still has entitled thinking. He (or she) believes he’s entitled to forgiveness and entitled to your trust, love, respect, and care without having to make any amends for the damage he’s caused you or your relationship.

Here are some additional verses that may help you understand that just because someone says the right thing, you still may not be able to believe or trust them. Paul warns us in 2 Thessalonians 2:3 “Don’t let anyone deceive you.” Why? Because it will hurt you to believe their words.

Peter tells us, “There are some things in them that are hard to understand, which the ignorant and unstable twist to their own destruction, as they do other Scriptures. You, therefore, beloved, knowing this beforehand, take care that you are not carried away with the error of lawless people and lose your own stability.” (2 Peter 3:16  ).

Paul also warns Timothy about people who pretend to be believers but have a completely entitled mindset. He says, “For people will be lovers of self, lovers of money, proud, arrogant, abusive, disobedient to their parents, ungrateful, unholy, heartless, unappeasable, slanderous, without self- control, brutal, not loving good, treacherous, reckless, swollen with conceit, lovers of pleasure rather than lovers of God, having the appearance of godliness, but denying its power. Avoid such people.” (2 Timothy 3:1-5)

And, 2 Thessalonians 3:6 says, “Now we command you, brothers, in the name of our Lord Jesus Christ, that you keep away from any brother who is walking in idleness and not in accord with the tradition that you received from us.” Idleness is laziness, refusing to do one’s own work or carry one’s own load. We are not to over-function for such individuals which only fuels their entitlement thinking.

Friends, what are examples of other kinds of restitution that people who are genuinely repentant would initiate?

My Husband Is Attached To My Daughters

Morning friend, I’m so grateful for you and the support you provide for one another on this blog. If you’re looking for or needing a deeper level of support and community as well as Biblical content to do your own work to get safe, sane, and grow strong, then please check out CONQUER. My CONQUER…

I’m Stuck. How Do I Help Him See His Problem Instead of Blaming Me?

Morning friend, I’ve been reading through Proverbs in the month of January. One chapter a day for 31 days. If you’ve never done that, I highly encourage you to try it. If you’re confused, and need wisdom for your life, especially when dealing with destructive individuals read it each day with these three categories of…

Morning friends,   I am in sunny Florida and have been working hard to relax. Yes, that is a challenge for me to just let go and take time for me. So I am practicing what I tell many of you and doing some self-care. Therefore, not to stress myself out trying to write…