Do I Have To Have Sex With My Husband?

Wow, this has been a crazy week. We had an overwhelming response to our invitation for new CONQUER members. It only shows me that there are so many Christian women who are feeling stuck and afraid in destructive and abusive marriages.

Second, I’ve been doing Grandma camp for the last two weeks, watching our 3 granddaughters at our cabin in Pinetop, Arizona. We’ve had a great time. Made jewelry bracelets and necklaces today and going horseback riding tomorrow. 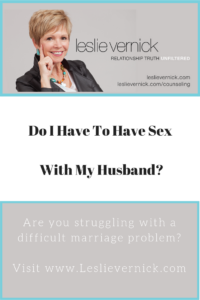 Today’s question covers a common problem I get asked frequently

Question: I’ve been married for 25 years to an emotionally and verbally abusive man. I feel angry and bitter toward him for the way he treats me, yet he still expects me to be loving and affectionate with him, especially in bed. I can’t do it. What does God expect me to do? Can I withhold sex as a consequence for his abusive behavior?

Answer: This is an extremely important question that many women face. I’ve written before about being treated as an object instead of a human being. An emotionally destructive marriage is where the personhood, dignity, and personal choice of the spouse is regularly diminished, degraded, disregarded or crushed.

No one likes feeling like an object, especially if you are in a committed relationship with the person who treats you as such. Husbands sometimes complain to me that they feel that their wives treat them like a paycheck. Wives complain that they don’t feel like a loved person but merely a sexual object or a slave.

Marriage is the most sacred and intimate relationship we have apart from our relationship with God. When one person (or both people) continually disrespect, mistreats or lies to the other, intimacy is broken. It can be rebuilt but not without genuine repentance and a lot of hard work.

From what you say, it sounds as if your husband believes he’s entitled to the benefits of married life, (sexual intimacy, your affection, and love, not to mention normal care), without having to do his part. He doesn’t seem to understand that having a good and loving relationship requires two people who interact with one another with kindness and respect to create a safe relationship. His emotionally abusive behavior is driving you further away from him. Does he just want sex from you? Or true intimacy?

The Bible calls us to love, not hate. That command includes our enemies. But what does Biblical love look like towards your husband in this instance? Biblical love isn’t necessarily feelings of affection or warmth, but actions that are directed toward another person’s long-term best interests.

Another way to look at this situation is that it is in your husband’s best interests to let him experience the felt consequences of broken intimacy and tell him that when he treats you disrespectfully, you’re too angry to feel warmth and affection towards him. When he’s not sorry he treats you that way, it makes it impossible for you to feel affectionate toward him. You need to have a calm conversation with him regarding your feelings. Here’s a sample of something you might say.

I know you get very frustrated when I’m not responsive to your sexual needs. You want me to be sexual with you and enjoy our physical relationship. But the way you treat me much of the time makes me feel angry and hurt. When you call me names or degrade me in front of the children, the last thing I feel like doing is being warm and affectionate towards you. If you want genuine intimacy and affection, you will need to work on changing the way you treat me. Wouldn’t you rather have someone who wants to get close and affectionate with you rather than someone who is just doing her duty?

Most men I talk with want closeness with their wives. Try expressing your feeling about being just an object versus a person. This may help him see the impact of his behavior, not only on you but on him. But if your husband won’t hear you and doesn’t care about what your feelings are, then what?

Hear me. I don’t believe in using sex as a weapon any more than someone should use the silent treatment as a weapon. It isn’t good for the marriage. It is controlling and manipulative.

However, I do think sometimes we have to say, “I can’t talk right now because I’m too angry to do it constructively” or “I can’t talk with you because you won’t hear me or listen to me.” That’s not using talking or not talking as a weapon, but stating a problem either with you or in the relationship.

In the same way, if someone says, “I can’t have sexual closeness with you right now because I’m too angry to do it lovingly” I think that is stating a truth. Or “Having sex with you feels like I’m just being used as an object but you don’t really care for me when you treat me so disrespectfully other times” helps the one who is doing the hurting to know what needs to change in order to repair the relationship.

Genuine love does not enable, does not appease evil, and does not feed the lie of entitlement. Click To Tweet

Friends, how do you respond to your husband’s entitled thinking when the relationship itself is broken or unsafe?

What If He Does Change?

Hi Friend, Thanks for your prayers. I do feel them. This week I am out of the office all week attending a coaching conference. Next week my younger sister and her family will be here for a visit. I’m looking forward to some time with her. We hope to take a four-wheeler through the desert…

Is My Husband Indifference A Form Of Abuse?

Morning friends, Wow, I am home at last. It’s been a long, long road trip. Sleeping in my own bed with my own pillow feels so good. Thank you for your prayers. I’m quite sure I would not have gotten through these days without them. Lesson learned: I do not like to travel (personally or…

Am I Enabling And Is It Wrong To Stop?

Morning friends, Thanks for your prayers. This season is exceptionally busy for me and I’ve been feeling the pressure of overload. Plus, when you are doing remodeling, nothing goes as planned so the chaos continues. Hopefully, by summer we will be back to running normally around here. Question: Thank you so much for what you…