Did I Miss God’s Will For My Life

I am on a retreat this week in Mexico. No Internet. No phone. No electricity except in the dining hall. I’m sleeping in a cabana with kerosene lanterns and my main focus is to rest and recharge. You know the saying, if you don’t put your own oxygen mask on first, you won’t be able to help anyone else. Time for good self-care. 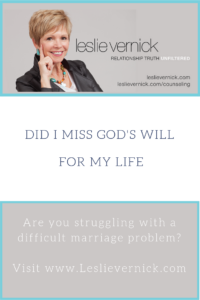 Today’s Question: I married a man I knew I shouldn’t have married, but I was just too chicken to call it off. My parents paid a lot of money for the wedding and I just thought I was having pre-wedding jitters. I’m now married 22 years, have three kids that are wonderful, but I have this nagging feeling that I disobeyed God and missed His perfect will for my life. Our marriage isn’t horrible, but I know I could have done better had I waited. How do I resolve this guilt that I missed God’s best?

Answer: One of the areas I find that many people agonize over is the thought that they have made a terrible mistake and as a result forfeited God’s best for their lives. Perhaps like you, they think they should have married someone else, or not married the person they did.

Maybe they wish they had chosen a different career path or a different job. Now they feel trapped, wishing they could go back, do it over and make different decisions. Over the years, some of us may have made bad choices, ones that directly contradict God’s word. Other times we have tried hard to discern God’s will, but at times still end up unsure, questioning whether we made the right decision.

For example, Sam was offered a wonderful job opportunity with a new company in California. He prayed about it, had the endorsement of his wife and kids and other good friends and believed that God was giving him the green light to accept this new job.

Sam and his wife sold their home and moved from Florida to California but after only five months the company went out of business and Sam and his family were left with no income, no benefits, and a lot of bills from the move.

“I really thought I heard the Lord tell me to move,” Sam said as he scratched his head bewildered. “How do you ever know what God’s will is or if you’re making the right decision?”

Like Sam, most of us look at temporal things—like success, personal happiness, and good results in order to confirm that our decision was in line with God’s will. Had Sam’s company continued to prosper, Sam would have not have doubted his decision as God’s will. No one who is happily married second-guesses whether she married the right person. We have been taught that if something is God’s will then good results or blessings will follow. If bad things happen, we conclude it is because we must have stepped out of God’s will.

But is this thinking Biblical? The apostle Paul thought he was doing God’s will by going on a missionary journey but ended up being shipwrecked (Acts 27).

Could it be that God’s will isn’t discerned by looking at the temporal benefits of a decision but in looking at the eternal results? What if God’s primary plan is not to make us successful or prosperous in this life, but to make us more like his Son in the messiness of real life?

Is it possible that Sam discerned God’s will correctly after all? Sam was to move to California with this new job, but not for any temporal pleasures he might have attained with a great job and a secure income. It was God’s will that Sam moved to California because the hardship that would come from losing his job would build into Sam and his family’s life, the character qualities of Jesus.

Knowing God’s will can be less stressful than we often perceive it to be. Peter tells us rather simply that it is God’s will that we be holy (1 Peter 1:16). Let’s look at this idea more specifically in three spheres of our lives: The things God wants us to be, the things he wants us to do and the personal choices we make.

What We Know (for sure) God Wants Us To Be

There are many passages in the Bible where God clearly tells us what He wants us to be. Throughout His Word God tells us to be loving, forbearing, patient, kind, forgiving, generous, thankful, fruitful, humble, obedient, faithful, self-controlled, pure and a myriad of other descriptions of character traits that He’d like us to develop.

In these passages, God tells us directly and specifically what we are to be or become. The apostle Paul tells us to be “imitators of God, and live a life of love” (Eph. 5:1). These Christ-like character traits are not learned from books or by sitting in a church but are often gained through the trials and tribulations that God allows in our life that stretch us and work out our spiritual muscles so that we might grow to be more like Him. Click To Tweet

What We Know (for sure) God Wants Us To Do
Furthermore, His word already tells us a great deal already about what we are to do as believers. For example, He tells us that wherever we are we are to pray without ceasing, to love our enemies, to bless those who hurt us, to speak the truth in love, to spread the gospel, to help widows and orphans, to encourage one another, to submit to one another, to glorify God, to bear one another’s burdens, to overcome evil with good and more. These Christ-like character qualities are to become the attitudes and actions of the Christian who wants to be holy and thus be in God’s will. So often we agonize over trying to figure out God’s will when He already tells us ninety percent of what we are to be and what we are to do in His word.

Personal Choice Within The Wisdom Of God’s Word
Making personal choices is the last sphere of knowing God’s will. It is often the one where we struggle the most. Should I go to Christian College X, Christian College Y or Secular University ABC?

Do I become a doctor, lawyer, accountant, or a missionary? Should I marry Tony or Dave?

Sam’s decision about moving to California to take the job offer fell into this category. These type of decisions are often made using a combination of God’s word, wisdom, the counsel of others and personal preference. It is sometimes in this area where we question whether we have made an awful mistake and missed God’s will.

Like you, Sally always doubted whether she married the right man. Jim was a believer but at the time she married him, Sally wasn’t quite sure he was God’s best for her. For years she doubted her decision. As a result, Sally felt trapped in a marriage she thought might be less than God’s absolute best.

However, if we can believe that God’s preeminent will is to conform us to the image of Christ, then for any decision that we make God can and does use for that purpose. This does not mean we should throw caution to the wind and make reckless choices. The book of Proverbs tells us the benefits of making wise decisions and the consequences of foolishness.

However, you need never fear that if you have made a decision that results in difficulties or hardships that God’s will has been thwarted. This is true whether its because of foolish decision making or because you stepped out in faith believing something was God’s will such as in Sam’s case where it seemed to him that everything had gone wrong.

Sam and his family, as a result of moving out to California and losing his job, will have the opportunity to learn how to pray more, how to forgive and love their enemy, how to trust God more than they ever have before, how to develop and practice perseverance and patience, how to overcome evil with good and how to move their faith from head knowledge to living, dynamic trust. Is this not God’s will— Plan A par excellence?

God can and does bring us back to Plan A—His best plan for our lives because He never deviates from that plan, no matter what decisions we make. He tells us in Romans 8:28 and 29 that He will cause all things, the good decisions we make and the bad ones to work together for our good for those of us who love God.

Too often we define our good as temporal happiness or personal satisfaction. But God defines our good as being conformed to the image of Christ (see verse 29). That promise has no time limit. There are no Plan B’s, for His promise is that He who has begun a good work in us will finish it (Philippians 1:6).

Friends, when you have doubted or feared you are on God’s plan B, what helps you get back on track?

Topic: What is the difference between coaching and counseling?

Happy Labor Day, Since today is a holiday and the last weekend of the official summer season, I thought I’d keep the topic light this week. Since I began offering coaching services, I’ve had quite a number of people write and ask me the difference between coaching and counseling. Instead of responding individually, I thought…

My Husband Is Doing His Work But It’s Affecting Me

Morning friends, How are you doing? It’s getting a little lonely and boring, isn’t it? Yet I hope you are all safe and your loved ones are healthy. As a part of the “community,” share with all of us some of the good television series and books you’ve been reading during this time. I…

Do I Have To Have A Relationship With My Mother-In-Law?

Morning friends, Thanks so much for your prayers. It was a grueling week and I spoke a lot and now I’m sick with a head cold. I have another week of travel to go. As I gave my keynote address at AACC there was a collective gasp when I said, “Abuse, adultery, and addictions are…