Necessary Changes For A Destructive Person

I am on a two week speaking gig to New Orleans, then North Carolina, and then Florida and I’d appreciate your prayers. Instead of answering a question this week, I thought I’d share an observation from Elisha’s interaction with Naaman from 2 Kings Chapter 5.

Naaman was a mighty warrior and commander in the army of King Aram. However, he suffered leprosy. Through a series of events, Naaman’s wife heard there was a prophet in Israel that could heal Naaman’s leprosy.

King Aram was in favor of Naaman seeking help and he sent him to the King of Israel with a letter of introduction with a caravan of silver, gold, and clothing as gifts. The King was speechless. He had no power to heal Naaman and felt anxious and threatened by Naaman.

But Elisha, the man of God heard about this and told the King to send Naaman to him. When Naaman went to see Elisha, Elisha never even answered his door. Instead, he sent messengers out to tell Naaman to wash himself in the Jordan River (7) times and he’d be healed.

But Naaman didn’t like Elisha’s treatment plan. He became angry and stomped away. Naaman expected Elisha to come out to personally greet him. He expected him to have some magic prayer that would instantly heal him. And after all, wasn’t the water in Damascus better than the rivers of Israel? Why should he do what Elisha had recommended? He walked away in a rage.

This reminds me of so many abusers. They say they want help but really don’t want to do what’s required. They expect it to be on their terms, but Elisha was not intimidated nor did he compromise the treatment plan just because of Naaman’s rage.

Eventually, Naaman’s officers reasoned with him and encouraged him to submit to Elisha’s treatment plan and this time he listened. To me, this reminds me of the importance of other healthy men who can come alongside an abuser to help him to humble himself to get the help he needs. 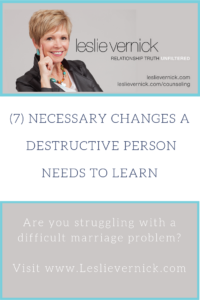 (7)  Necessary changes for a destructive person:  Seven Tips of Healing from 2 Kings Chapter 5

Friends, have there been other men in your husband’s life who have spoken sense (truth) to him when he refused to listen to you?  If so, did he listen?

Do I Have To Reconcile

Morning friends, Thanks for your prayers. My week in Mexico was amazing. If you want to hear a little bit about it as well as see some of the paintings I did while there, you can watch my most recent FB live here. We still have a few more openings for our Thursday Empowered to…

Morning friends, This is week one of a four-week semi-sabbatical I have given myself to “catch up” and refresh. I need to catch up on lots of writing projects that have gotten behind and need to refresh my spirit with some uninterrupted space to read books and ponder the things God has put in my…

What Are The Consequences for Serious Sin?

Hey friends, This weekend I’m in Chicago visiting my family for Christmas. I’m eating pizza, pizza, pizza and if you know Chicago’s pizza – it’s the best. This week’s question: I so enjoyed your book, How to Act Right When Your Spouse Acts Wrong, I want to read it over again and pray and…