We had an amazing CONQUER conference. It could not have been better. Over 800 women showed up from all over the US, Canada, and even Germany to be with us. God’s presence and Spirit were clearly felt. Vocal soloist Nichole Nordeman was so raw and real. Lots of tissues were used as she vulnerably shared her journey through song. Sheri Keffer, our Friday night speaker also so vulnerably shared her own painful past and how God uses all things to help us Be Brave and Grow Strong. Workshops were full of eager women who wanted to learn how to put their brave on in particular areas.

I loved meeting many of you from this blog community in person. I hope you got a chance to meet one another and visit. The CONQUER women who attended – over 160 of them, got to know one another better and some have established lasting friendships. We had a big dinner party after the conference that was tons of fun. 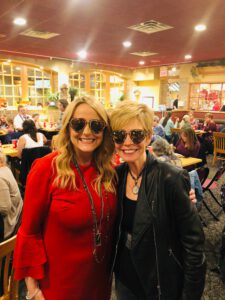 One of the things that took my breath away was the number of women who put their brave on and came to this conference alone. No girlfriend or daughter came with them. All alone, they ventured out. Some traveled from Alaska, even the farther reaches of Canada, driving over 20 hours alone to get there. And they may have come alone but they did not leave alone. They found girlfriends who know what their life is like. They found God and his love for them.

Words cannot express my heart right now. It is full to overflowing with what God does when we give him our five loaves and two small fish. He creates miracles.

Today’s Question: I just finished your book The Emotionally Destructive Marriage. God has opened my eyes more and more in the last year and a half to the reality that I am in a destructive marriage.

Last year as I began to see it more clearly and got counsel from a former pastor and his wife. I am not responding to my husband like I have for 30+ years. It has messed with him and he doesn't like it.

For many years I've known “things are just not right” but as you said in your book, the counsel I received from older women was for me to do the right thing and hang in there.

Currently, I am concerned (as I have been various times in the past) about my husband's emotional state. He is depressed but is very much against medication for it.

One of his grandfathers killed himself. There has been such an increase in suicide recently that it concerns me even more. Last summer when we had a huge bad event, he left home for a day and took his pistol. He's saying things like “you can't trust anyone.” Or, he says he “Doesn't know why God would let him go through all the grief he's gone through the last 3 years.”

He doesn't see any purpose in it. He's very self-focused. He thinks he has it much worse than most people and that even though he knows Christ should be enough, he still thinks people ought to show some kind of favor towards him… I am concerned he may be suicidal.

It's hard to tell if it's that or if he's just trying a different tactic with me. How do I know? And when do I start trying to make changes?

Answer: You’re right, suicide is on the rise and your husband may be at higher risk. He’s feeling hopeless and desperate and has a family history of suicide for starters which makes his risk for suicide higher. But he also has access to a pistol (which adds to the impulsivity of an act of suicide) and has poor control over his emotions as well as a bad case of “victim” mentality.

You have every reason to be concerned that he might do himself harm in a bad moment.

But here is what you need to wrestle through. Is it your responsibility to keep him from doing something stupid – even if it is suicide?

Please don’t mishear what I am saying. I’m not saying to be indifferent to his pain, or just tell him, “go kill yourself if that’s what you want to do.”  That is cruel and not in keeping with the woman you want to be.

You see where this line of questioning is going, don’t you? You have absolutely no power to manage his life, his decisions, his feelings or his thoughts. You can try, but you won’t succeed because those are his responsibility to manage.

You’re right. It does become scary when someone you love is not managing those things well and you fear he may do something really stupid. However, if you become a hostage to the fear that he might commit suicide if you upset him, have boundaries on what you will tolerate or even separate from him, then what?

So what can you do? You certainly can have a talk with him and share with him your concerns about his own mental health and emotional well-being. However, I’m pretty sure you’ve already done that and he’s not doing anything different. If you haven’t, start there.

It’s really important to take good care of you. Be kind but firm with him. If you feel unsafe or need to leave then leave. If he uses suicide as a threat to manipulate you, call the police. Simply dial 911 and say, “My husband is threatening suicide and I’m concerned for him.” If he doesn’t exactly threaten to kill himself it gets a little more tricky but I think you can say, “I fear he may harm himself.”

That’s the most you can do to help him right now short of allowing him to keep you hostage to his threats. If he gets upset by you doing that I think you can say to him, “I care about you. I care about your safety and your sanity and when you are threating to harm yourself or acting as you might, it scares me. The only person who can possibly help you right now is the police where they can take you to the hospital for help.” Notify his close family members (if he has any) that he’s suicidal and needs help.

That way if he’s using threats of suicide to manipulate you, it stops working because you do have someone to call and he has someone else to help him.

If he’s actually intent on committing suicide because he’s angry with you or hopeless over the marriage, he very well might attempt it and succeed. I’ve worked with two women whose husband’s have committed suicide during their marital separation. My bigger concern, however, is for you. A suicidal angry husband may also be homicidal and try to kill you before he kills himself. When a person has nothing to lose, nothing to hope for, and is angry enough with you, this can be a recipe for disaster. We read about it all the time in the newspaper.

Therefore, you have to value your safety and be a good steward of your own self. Proverbs warns, “the prudent see danger and take refuge” (Proverbs 27:12). Please develop a safety plan for yourself in case he threatens you or if you feel unsafe. Consult with the National Domestic Violence Hotline for help in developing one. Their number is 1-800-799-SAFE (7233). If you can, remove the bullets from his pistol and hide them as long as you are living in the house. Make sure you have an exit strategy and the bottom line is you may need to separate, which will increase your danger levels so do it with professional guidance.

Friends, when your spouse or destructive person has tried to manipulate you with threats of suicide, how have you handled your feelings of fear and guilt?

My husband still wants to see another woman. What do I do?

Question: My husband confessed to adultery 4 years ago and till now, he wants to cling on to his “2nd wife”. I have chosen to stay on in this marriage and not fight in the worldly sense. However I wonder if that is wrongly telling him that it is alright to carry on this choice…

Topic: What do you want said at your funeral?

Evening friends, Last week I was in California visiting with my precious grandbaby. We went to Disney Land to celebrate her first birthday. It was cold, but thankfully didn’t rain (it rained the rest of the week). But over the past two weeks I’ve been pondering something. What do you want said about you at…

Morning friends, This is my last full week in California and then I head back home (long drive) to Pennsylvania. I am ready to get home. I love California and sunshine, ocean, and grandchildren, but I miss my house and my stand up desk where I can do most of my work standing rather than…